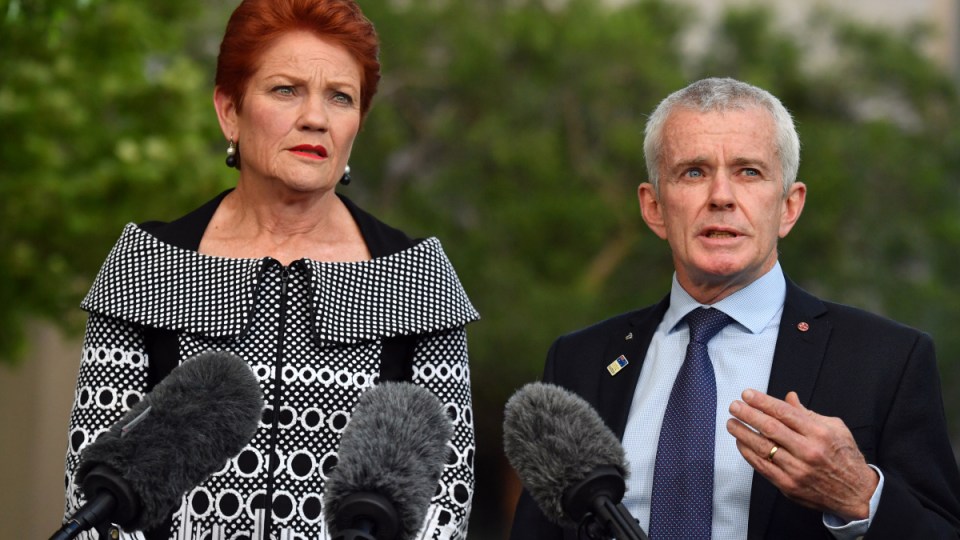 Pauline Hanson and Malcolm Roberts have been blasted by Brendan O'Connor Photo: AAP

A spectacular spray at Pauline Hanson and her “intellectually obtuse” colleague has been levelled by Labor, after One Nation again flip-flopped on a key piece of legislation.

“I didn’t expect much from the dim-witted Senator Malcolm Roberts or a few others, but frankly I expected Pauline Hanson, who boasts about supporting workers in Queensland, would have done better,” said Labor’s shadow employment minister, Brendan O’Connor.

The government’s JobMaker hiring credit plan, the centrepiece of their October budget, finally passed through Parliament on Wednesday after a day of high drama in the Senate. The wage subsidy, providing up to $200 for businesses to employ under-35s on welfare, had been criticised over fears that dodgy bosses might sack older workers to hire cheaper substitutes.

Labor, the Greens and members of the Senate crossbench – including One Nation – had initially opposed the plan, voting it down and demanding the government put in stronger safeguards against sacking older workers.

Federal treasurer Josh Frydenberg was adamant this wouldn’t happen, telling Sky News that Fair Work Act provisions will continue to apply, and would protect against issues like unfair dismissal.

“There are many protections that are in place,” he stressed.

Labor had signalled its intention to push this as far as possible, drawing a line in the sand that they wouldn’t support the plan without the extra guidelines.

But Senator Hanson and her One Nation colleague Senator Roberts later flipped their votes, supporting the government and seeing the legislation pass the Senate late on Thursday.

Mr O’Connor, accused the far-right party of stitching up a “grubby deal” with the government for their votes.

“One Nation supported the amendment, but then after a conversation with the government, chose to betray workers in Queensland and around the country,” he said on Thursday.

“They’ve been hoodwinked, or they’ve done a deal.”

“It’s almost like the last person who speaks to them, manages to convince them of their position.”

Government Senate leader Simon Birmingham said there was “no deal, no agreement” with One Nation.

One Nation’s senators said they changed their vote after receiving more information from the government about the system’s benefits and how it would work.

“I don’t think much of [Senator Roberts], he’s probably one of the most intellectually obtuse senators in our history,” he said.

Mr O’Connor said Labor was worried about “rogue employers who will game the system”.

Mr Frydenberg said employers would need to show increased head count and payroll costs to be eligible. He said Fair Work Act provisions around unfair dismissal would apply – however, unfair dismissal claims can’t be lodged by workers who have been with an employer for less than a year.

The safeguards backed by Labor and the Greens would have disqualified employers found to have sacked a worker in order to get the payment.

Senator Hanson said the Treasurer provided her with legal advice rather than “bits and pieces” from Labor.

“If this is going to help those youth get jobs – give them some incentive to get jobs – then maybe I am wrong,” she told Parliament.

“I’m quite willing to admit if I am wrong if it will get the jobs.”

Senator Roberts said being presented with publicly available unemployment figures for people under and over 35 flipped his vote.

“When we get new data we have the courage and the integrity to change our position,” he said.

The jobless rate for people under 35 is 10.4 per cent, while unemployment is at four per cent for those in the older bracket.

The amendments also would have legally required transparent reporting.

The program is expected to create about 45,000 new jobs, despite the budget spruiking 450,000 roles.

‘Admit what the hell is going on’: Biden wants US to face White Supremacy problem
Sydney home sprayed with bullets in gang violence
Device detonated, man arrested in Brisbane sieges
Peace talks between Russia, Ukraine stall
Viagogo loses appeal over $7m penalty
British MP arrested on suspicion of rape
Everyone is talking about another Liberal – but don’t expect more than a whisper
Today's Stories

‘Dim-witted’ One Nation blasted over another Senate flip-flop