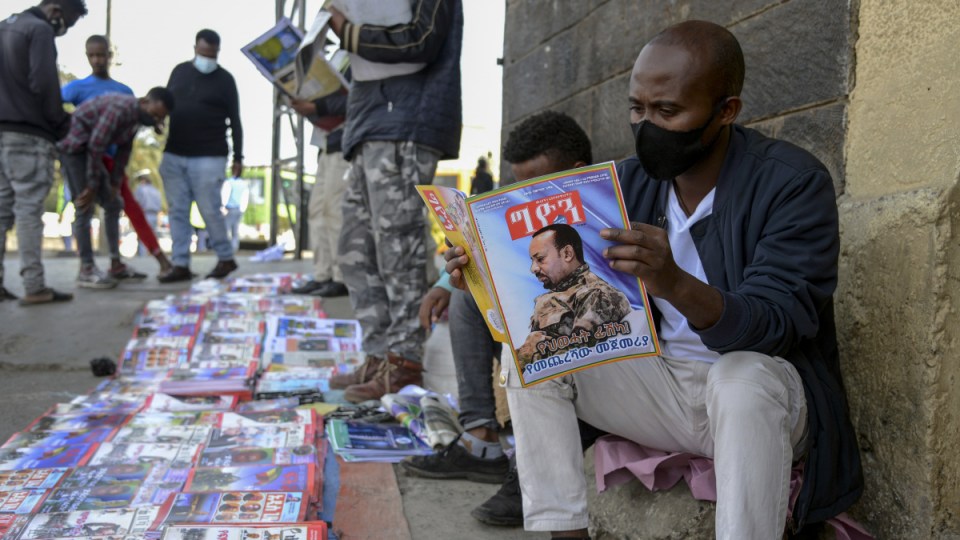 Ethiopians read about the military confrontation in the country on a street in Addis Ababa. Photo: AP

Ethiopia’s prime minister has stepped up a military offensive in the northern region of Tigray with air strikes, increasing fears of outright civil war in Africa’s second-most populous country.

Prime Minister Abiy Ahmed has defied calls from the United Nations and allies in the region to negotiate with leaders in Tigray, home of the ethnic group that dominated the federal government before he took power in 2018.

Mr Abiy last week launched a military campaign in the province, saying forces loyal to leaders there had attacked a military base and attempted to steal equipment.

Mr Abiy accuses the leaders of Tigray of undermining his democratic reforms.

Concerns that Ethiopia will descend into chaos are unfounded & a result of not understanding our context deeply.Our rule of law enforcement operation, as a sovereign state with the capacity to manage its own internal affairs, will wrap up soon by ending the prevailing impunity2/2 pic.twitter.com/YMaRbhfFOw

Government fighter jets have since been bombing targets in the region, which borders Sudan and Eritrea.

Aid workers on Sunday reported heavy fighting in several parts of the region, with at least six dead and dozens wounded.

Also on Sunday, Mr Abiy named a new chief of the army, a new intelligence chief and a new federal police commissioner and foreign minister, changes that analysts said brought close allies into top posts as the conflict escalates.

The premier won last year’s Nobel Peace Prize for making peace with neighbouring Eritrea and for introducing democratic reforms in one of Africa’s most repressive countries.

But the democratic transition he promised is endangered by the Tigray conflict, the International Crisis Group think-tank warned last week.

In a televised address on Sunday, Mr Abiy urged the international community “to understand the context and the consistent transgressions” by the Tigrayan leaders which led the government to undertake “this law enforcement operation”.

Tigrayans complain that Mr Abiy, who is from the Oromo ethnic group, Ethiopia’s largest, has unfairly targeted them as part of a crackdown on past rights abuses and corruption.

Forces of the Tigray People’s Liberation Front (TPLF), which governs the region, are battle-hardened and possess significant stocks of military hardware, experts say.

They and militia allies number up to 250,000 men, according to the International Crisis Group.

One of the biggest risks is that Ethiopia’s army will split along ethnic lines, with Tigrayans defecting to the regional force. There are signs that is already happening, analysts said.

The United Nations raised concerns of reprisals against ethnic Tigrayans amid heightened tension in the diverse country in a confidential report dated Sunday and seen by Reuters.

Addis Ababa Police Commissioner Getu Aregaw said on Sunday that the government had arrested 162 people in possession of firearms and ammunition, on suspicion of supporting the Tigrayan forces.

Concerns of war in Ethiopia grow as air strikes continue