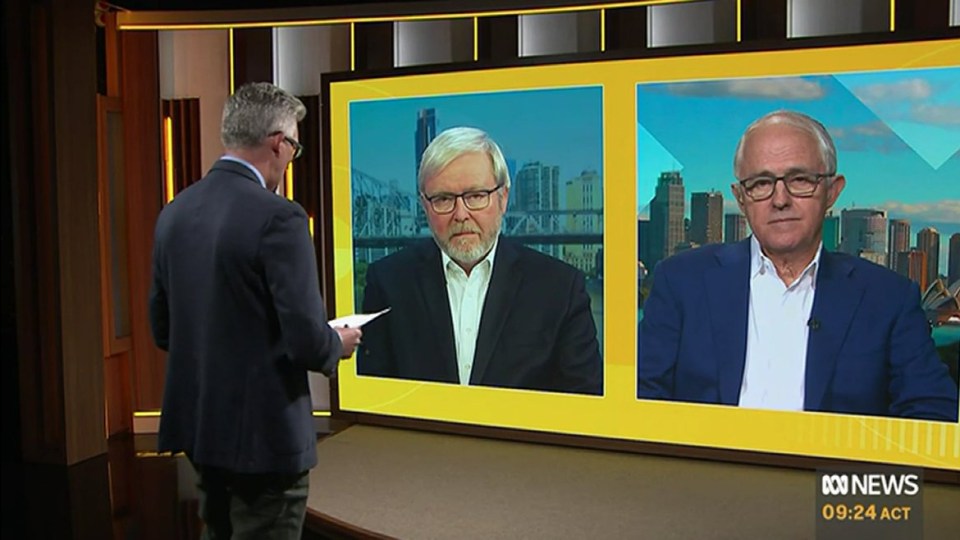 Towards the end of Malcolm Turnbull and Kevin Rudd’s joint interview on the ABC’s Insiders on Sunday, host David Speers gave voice to the thought that was on the lips of every viewer watching from home.

“Years ago, I would have doubted there would be so much agreement between the two of you,” the veteran broadcaster said with a smile, the smiling visages of the former prime ministers towering over him from two giant televisions.

“So would we,” Mr Rudd replied.

It capped an extraordinary interview and the latest chapter in an unlikely budding bromance from the two former rivals, who have teamed up in their post-politics careers to take on the white whales they couldn’t vanquish even from the highest office in the land.

“We had agreed on an emissions trading scheme once upon a time,” Mr Turnbull reminded the Insiders host at the end of their wide-ranging chat.

It’s not difficult to see the most recent ex-PM still carries grudges over his unceremonious booting from The Lodge in August 2018, replaced by Scott Morrison after a toxic partyroom brawl over energy policy.

Mr Rudd also lost his prime ministership in 2010, in no small part due to his controversial dumping of a carbon reduction scheme and the ensuing popularity hit.

Both have blamed the “Murdoch media” for waging campaigns against their leaderships, and in the years since they left Parliament, both have fired shots back and kept spruiking their thoughts on strong climate action.

The pair are not exactly good friends – indeed, Mr Rudd was famously enraged when then-PM Turnbull blocked his bid to run for United Nations secretary-general in 2016 – but have backed common purposes in recent times.

Mr Turnbull recently became the biggest political name to support Mr Rudd’s calls for a Royal Commission into media ownership in Australia, a campaign not even the Labor Party publicly backed.

Good to have you on board, @TurnbullMalcolm. Supporting media diversity isn’t about left or right, Labor or Liberal, but preserving the lifeblood of our democracy.

11 days left to get our petition in front of as many Australians as possible. Please share: https://t.co/FjfK7ij7YQ https://t.co/CdnZArY5gU pic.twitter.com/xkHtPF2SkE

So it was perhaps a programming coup to get Australia’s angry grandpas on TV together on Sunday in the wake of the US election being handed to Joe Biden just hours earlier, to have them continue their unlikely alliance in front of a national audience.

On the agenda? Climate, News Corp and, of course, Donald Trump.

Rupert Murdoch was mentioned no fewer than a dozen times in the Insiders interview.

“Trump has lost. Murdoch’s man in the White House has been defeated,” Mr Turnbull said.

Mr Rudd called out “Murdoch bullies” for haranguing Mr Turnbull, calling the media proprietor “a cancer on our democracy”.

“Malcolm and I disagree on a multitude of things, but Murdoch’s treatment of Malcolm Turnbull in 2018, directly interfering into the internal politics of the Liberal Party, to do what he could through his editors to bring about a leadership change to Morrison or Dutton at the time, is a disgrace,” Mr Rudd said.

WATCH: @MrKRudd on what changes he would like to see come out of his petition calling for a royal commission into News Corp. #insiders #auspol pic.twitter.com/lzb3HM57Hz

“Murdoch has engendered a culture of fear in Australia about this discussion because he goes after people individually who raise
this question. Including myself, including Malcolm and others,” he complained.

On the hot-button topic of climate, the pair said they hoped Mr Biden would usher in a new era of global environmental action and co-operation.

Mr Turnbull couldn’t resist taking a stab at Mr Morrison’s plans for a ‘gas-led recovery’ – a plan he called “BS” and “piffle” – and loudly calling for stronger commitments.

“This is the time to pivot, otherwise [Morrison] is going to look out on the extreme with Saudi Arabia, as some kind of a carbon economy,” Mr Turnbull quipped.

“Really, we can do so much better than that, and now is the time for Scott to move.”

WATCH: @TurnbullMalcolm on whether the US presidential election means Scott Morrison should now commit to net zero carbon emissions by 2050 or even a more ambitious short-term target. #insiders #auspol pic.twitter.com/lZc9WQ7UbM

Mr Rudd claimed the government’s policies amounted to a plan to “hide in the shadows”, and called on Mr Morrison to “swallow your political pride and get real” on a net-zero target.

But stinging words were also reserved for the vanquished Mr Trump.

Mr Rudd said the President should “put on his big boy pants” and “act like a grown-up” after his loss.

Mr Turnbull, famously the target of Mr Trump’s ire in a 2016 phone call over refugee policy, said the change was “a good thing for everybody”.

“It’s a relief to have a return to normal transmission, to have an administration that is going to be consistent, that isn’t going to be making decisions by wild tweets in the early hours of the morning,” he said.

“That isn’t going to be walking out of global treaties and alliances,  discombobulating friends and foes alike.”

It’s unclear where the next stage of this whirlwind bromance will take the former PMs, but it’s sure to be interesting to watch.

Australia’s angry grandpas Turnbull and Rudd team up on Trump, Murdoch and climate