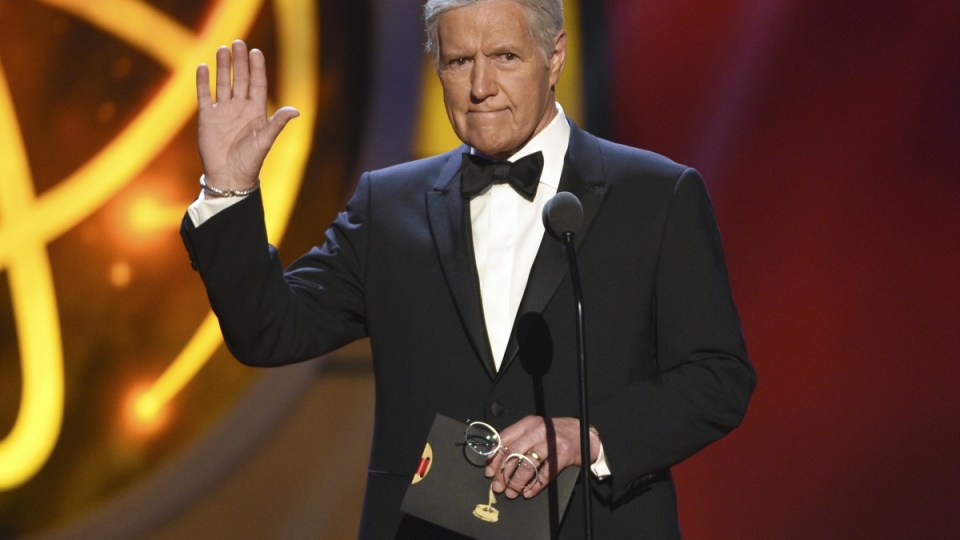 Alex Trebek in 2019 while presenting an award at the 46th annual Daytime Emmy Awards in Pasadena, California. Photo: AAP

Game show host Alex Trebek, who as the brainy quizmaster of Jeopardy! became one of the most recognisable personalities on American television, has died at the age of 80.

The Canadian-born Trebek said in a YouTube video in March 2019 that he had been diagnosed with Stage 4 pancreatic cancer, vowing to beat the disease despite the long odds.

Trebek, a popular figure on Australian TV as the show airs weeknights on SBS Viceland, told fans in August 2019 he had completed chemotherapy.

Yet he disclosed the following month that he had to restart treatment because of a setback.

He passed away peacefully at home surrounded by family and friends, the show’s tweet said.

Twenty years after Jeopardy! first aired in 1964, Trebek became the face of the show and turned it into a ratings powerhouse.

Jeopardy!, which requires contestants to display their knowledge of a broad range of trivia topics by providing their answers in the form of a question, has consistently drawn more than 20 million viewers a week in the United States and Canada.

Its ratings have risen even higher when contestants have racked up several weeks of consecutive wins.

“Here’s the belief that lies at the core of Alex’s TV persona: Jeopardy! itself, not he, is the star of the show,” Ken Jennings, a former Jeopardy! contestant who holds the record for the longest winning streak on the show, said of Trebek in a 2019 column in the New York Times.

Trebek was known for engaging contestants with straight-faced but witty banter and for his scholarly demeanour and scrupulous pronunciation.

Mr Jennings compared Trebek, who hosted more than 7000 episodes of Jeopardy! with the late news anchor Walter Cronkite and talk-show host Johnny Carson because his nightly presence on television had become a “matter of ritual.”

Trebek won six Emmy Awards for outstanding game-show host, most recently in 2019, and also received a Lifetime Achievement Emmy in 2011.

Trebek is survived by his wife, Jean, and their two adult children, Emily and Matthew.