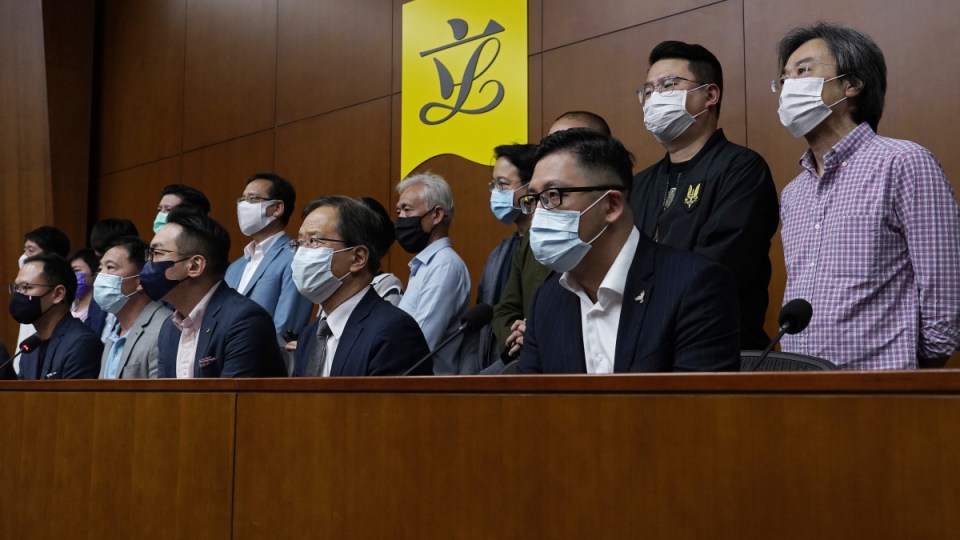 Hong Kong's pro-democracy legislators said on Monday they would resign en masse if Beijing disqualifies any of them. Photo: AP

Hong Kong’s pro-democracy lawmakers say they will resign en masse from the city’s legislative council if the central Chinese government in Beijing disqualifies any of them.

The announcement from the 19 opposition lawmakers came amid unconfirmed reports that China’s National People’s Congress Standing Committee, which will meet on Tuesday and Wednesday, was preparing to disqualify four legislators.

Media reports in Hong Kong, including from the South China Morning Post, said that the four lawmakers would be accused of filibustering meetings and violating their oaths of office.

The convener of the pro-democracy camp, Wu Chi-wai, said that any move by Beijing to disqualify the legislators and prevent them from doing their duties would be “ridiculous”.

“It reflects they are ruthless, and they disrespect the Basic Law,” he said, referring to the mini-constitution that governs the semi-autonomous territory of Hong Kong after the former British colony was handed back to China in 1997.

Lawmaker Dennis Kwok said that disqualifications would be a “serious departure” from the original spirit of the “one country, two systems” framework under which Hong Kong enjoys freedoms not found in mainland China.

“It seems like those in power cannot tolerate opposition anymore,” Mr Kwok said.

The four legislators who are said to be on the verge of disqualification were barred from seeking re-election earlier this year.

After the legislative election was postponed, the four had decided to stay on as lawmakers for another year.