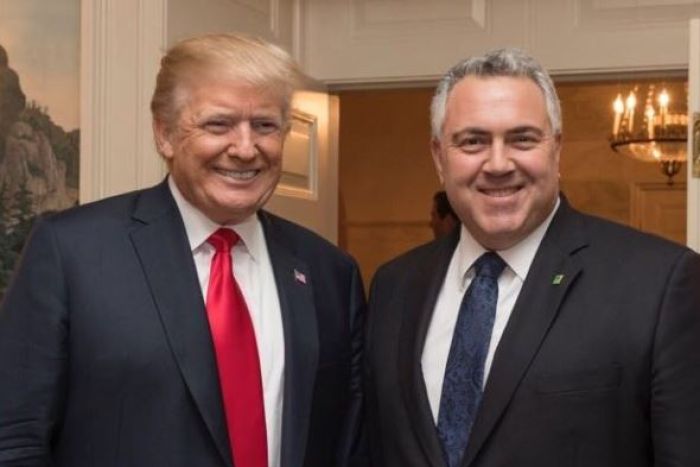 Joe Hockey claimed there was "fraud" but missed the historical trend. Photo: ABC

Former treasurer and US ambassador Joe Hockey has made the baseless claim that there was “fraud” in the presidential election, citing standard voting statistics as evidence of tampering.

It comes as Coalition MP George Christensen is fact-checked by Facebook for a “misleading” post alleging “Democrat vote fraud”.

President Donald Trump has been slammed for the claim that he had “already won” despite trailing in the overall electoral college count, and in key states still to be decided. Mr Trump also made the outrageous demand that states stop counting votes, and has made vague promises about “going to the Supreme Court”.

The President has also made unsubstantiated claims about “secretly dumped ballots” and that “they are trying to STEAL the Election.”

Some Australian politicians have swung in behind these baseless allegations. Mr Hockey, the former treasurer under Prime Ministers Tony Abbott and Malcolm Turnbull, told 2GB Radio “for sure” election fraud had happened in the USA.

“There’s plenty of good reason to have litigation, I mean it is a complete dog’s breakfast right across the country,” claimed Mr Hockey, who has praised President Trump and enjoys a strong relationship with him.

“In Washington DC, 93 per cent of the city voted for Joe Biden … I find it hard to believe.”

But historical results show a Democrat vote percentage in the 90s is not only not an aberration, it’s the absolute norm.

Washington DC has overwhelmingly voted Democrat in every Presidential election since its citizens were given presidential voting rights in 1964. The lowest vote the Democrats ever registered was 78 per cent in 1972, and the party has polled above 85 per cent in the last six elections.

Joe Hockey (Australia's former Ambassador to the US) claimed this morning that electoral fraud had "for sure" occurred. He pointed to the fact DC voted 93% for Biden, "I find it hard to believe".

Mr Hockey, served as Australia’s ambassador to the United States between 2016 and 2020. The Saturday Paper’s Osman Faruqi tweeted that, considering he lived in Washington DC for that time, Mr Hockey should have known this.

Mr Hockey later tried to tweet an MP3 version of the interview with 2GB, but mistakenly posted the file name as text in his tweet, instead of embedding the audio file.

It is not possible to directly upload an MP3 file to Twitter.

But Mr Hockey isn’t the only Coalition politician who has cast doubt on the results.

Nationals MP George Christensen took to Facebook early on Thursday morning, claiming there had been “fraud” in the US election. The Member for Dawson alleged “unnatural jumps in tallies in Wisconsin and Michigan” and “dodgy extra votes”.

But the MP’s post was soon slapped with a Facebook fact-check, with a warning placed on it saying it was “missing context”.

“Independent fact-checkers say this information is missing context and could mislead people,” an advisory alongside the post reads. It links to a comprehensive fact-check article from Politifact, which explains that the sudden spike in Biden votes was “because counties in those states released a large batch of results all at once”.

In a press conference on Thursday, PM Scott Morrison said he wouldn’t comment directly on the progress of the US election, saying it was important to be “patient”.

“We respect the decisions that the American people make in their democracy,” he said.

“This is a democracy that has withstood the demands of centuries and I have no doubt it will continue to prevail and continue to be a great partner for Australia.”

“I don’t share the impatience of others when it comes to a result being arrived at.”

Foreign minister Marise Payne alluded to Mr Trump’s calls to stop vote counting, saying “what is important is that every vote is counted, and I’m sure that they will be.”

“All of us who hold democratic values around the world need to be prepared to speak up for democracy.”