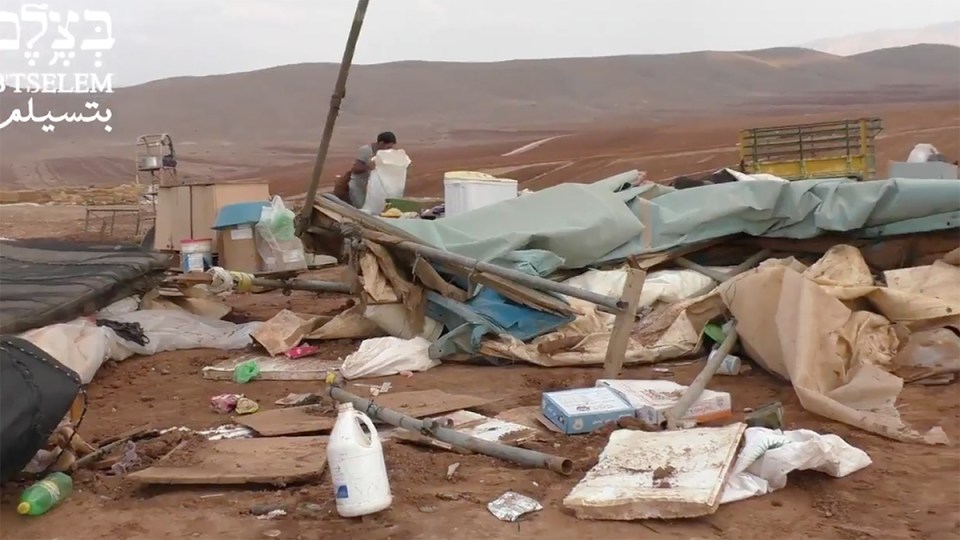 The Bedouin village of Khirbet Humsah was demolished by Israeli forces on Tuesday. Photo: B'Tselem

Israel has demolished most of a Bedouin village in the occupied West Bank, displacing 73 Palestinians – including 41 children – in the largest such demolition in years, residents and a United Nations official say.

Tented homes, animal shelters, latrines and solar panels were among the structures destroyed in the village of Khirbet Humsah on Tuesday, according to the UN official.

Israel’s military liaison agency with the Palestinians, COGAT, confirmed that a demolition had been carried out against what it said were illegal structures.

By Thursday morning the residents had already moved back to the site, using tents donated by Palestinian aid groups, according to a Reuters witness.

BREAKING: Israel has destroyed Khirbet Humsah Al-Fawqa, a village in the Jordan Valley whose small houses they say were in a military firing range.

41 children are now homeless.
Share with anyone who claims to be "pro-life" or "pro-peace", and invite them into the resistance. https://t.co/I41tfnnFOT

The remains of the demolished village lay across the hillsides, with just two of the original homes still standing some distance from the others.

“They want to expel us from the area so that settlers can live in our place, but we will not leave from here,” said resident Harbi Abu Kabsh, referring to the 430,000 Israeli settlers who live alongside three million Palestinians in the West Bank, which Israel captured in a 1967 war.

COGAT on Wednesday issued a statement saying that an “enforcement activity” had been carried out by Israeli forces “against seven tents and eight pens which were illegally constructed, in a firing range located in the Jordan Valley”.

Israel often cites a lack of building permits in demolishing Palestinian structures in the West Bank.

Yvonne Helle, a humanitarian co-ordinator for the United Nations in the Palestinian territories, said that relief agencies had visited Khirbet Humsah and recorded 76 demolished structures, “more than in any other single demolition in the past decade”.

Palestinian Prime Minister Mohammad Shtayyeh accused Israel of timing the demolition for election day in the United States, when the world was distracted.

He wrote on Twitter: “As the attention is focused on #USElection2020, Israel chose this evening to commit another crime/ cover it up: to demolish 70 Palestinian structures, incl. homes.”

A COGAT spokesman on Thursday had no immediate comment on Mr Shtayyeh’s claim.

But its statement on Wednesday said: “The enforcement was carried out in accordance with the authorities and procedures, and subject to operational considerations.”

Some 689 structures have been demolished across the West Bank and East Jerusalem so far this year, leaving 869 Palestinians homeless, according to the United Nations.