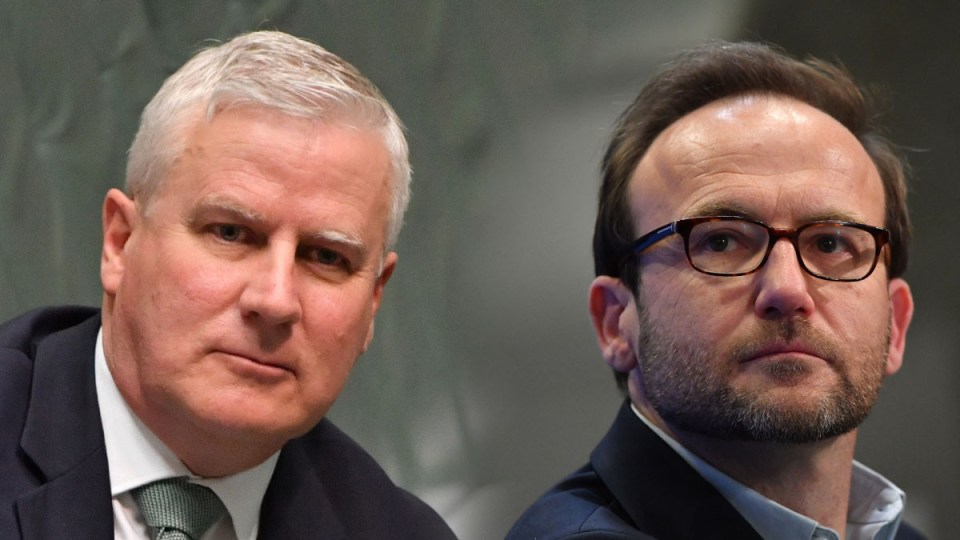 The leaders of the Greens and the Nationals parties are at each others’ throats as an extraordinary war of words over coal escalates with calls to resign and bizarre historical insults.

Michael McCormack and Adam Bandt have accused each other of betraying the nation, after the Greens leader encouraged South Korea’s parliament to stop buying Australian coal and to impose carbon tariffs.

“We have no carbon price any more, so we need a price signal on our dirty products,” Mr Bandt said in a speech, delivered on video link, to South Korea’s National Assembly.

“Not only do I ask that you work to get your government to stop buying Australian coal but I also encourage you to agitate to renegotiate our free-trade agreements to include carbon tariffs against us.”

Mr Bandt’s speech came a week after Japan, one of Australia’s biggest trading partners, committed to becoming carbon-neutral by 2050.

They joined the European Union, Britain and South Korea to have all committed to achieving net-zero emissions by 2050, with China pledging to hit the target by 2060.

All are among Australia’s biggest trading allies and purchasers of our coal.

Prime Minister Scott Morrison said last week he was “not concerned” by the climate pledges of our allies, of a type that Australia has not committed to.

Mr Bandt’s speech prompted a savage response from Mr McCormack, the Deputy PM and leader of the rural-focused Nationals party, who claimed Mr Bandt had “attempted to undermine our democracy”.

Back Team Australia or resign: Adam Bandt must go.

Reports today that Greens Leader Adam Bandt is urging a foreign Government to act to the detriment of Australia's national interest are deeply concerning.

“If you want to change policy in Australia, you don’t do it by trying to outsource policy making to a foreign entity – you change it by running for election and winning enough votes to form a government,” Mr McCormack said in a blistering statement.

“The Nationals urge Mr Bandt to immediately withdraw his comments and apologise to the thousands of workers who rely on Australia’s resource industry for their livelihood. If Mr Bandt does not withdraw these comments, he should resign from Parliament today.”

The Nationals leader went on to make an insult via a strained historical analogy, calling Mr Bandt “Australia’s modern-day Benedict Arnold – with the same initials (albeit the other way around)”.

Benedict Arnold was an American Revolution-era general and one of George Washington’s trusted military officers, who defected to the British side and offered to surrender to them a key fort. His plan was foiled, but his name became synonymous with betrayal.

Mr Bandt soon fired back with a scathing statement of his own, in turn accusing Mc McCormack of selling out Australians by backing coal in the face of a warming planet and alarms raised over climate change.

“Michael McCormack is putting Australians’ safety at risk and he should stand down,” Mr Bandt claimed.

“The next time a bushfire or cyclone hits, Australians should remember that the Deputy Prime Minister actively pushed for more coal to make the climate emergency worse. He will bear some responsibility.”

Michael McCormack is a threat to Australia and he should go.

The Deputy Prime Minister is failing in his first duty to keep people safe.

His coal-hugging risks lives and puts farmers and jobs under threat.

The only way to protect this country we love is to phase-out coal. https://t.co/E1914awWzZ

Mr Bandt cited recent evidence from the Bureau of Meteorology, given at Senate estimates, that Australia’s climate could warm by 4.4 degrees by 2100, under current emissions and environmental trends.

“Runaway global heating will endanger the livelihood of every farmer in Australia,” he said.

“The Deputy Prime Minister wants to make it even worse. The only way to protect Australia is to take strong action on climate and phase out coal,” Mr Bandt claimed, before lobbing a historical insult of his own.

Winston Churchill is recognised as one of Britain’s greatest Prime Ministers, having led the country to victory in World War II.

He took over from Neville Chamberlain, who was forced to resign the Prime Ministership after a failed military campaign to occupy Norway in 1940.

“The coal-fuelled climate crisis is driving farmers off the land, putting people out of work and devastating Australia, but Michael McCormack has chosen coal over crops. Farmers should be coming after him with pitchforks,” Mr Bandt claimed.

The Greens leader said he was “thrilled” to make the speech to South Korean politicians, which sparked Mr McCormack’s withering attack, and even went further in asking other world leaders to ignore the Australian coal market.

“I am urging our trading partners to send Australia a clear signal that they are moving to a zero-pollution society and our thermal coal has a use-by date,” he said.

Insults fly as McCormack, Bandt tell each other to resign