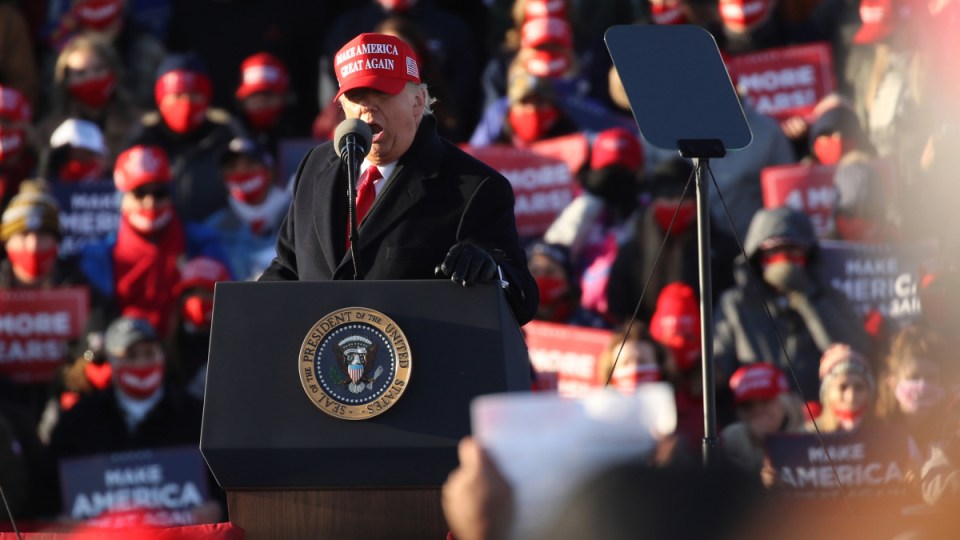 Mr Trump is crossing the crucial state of Pennsylvania in the last day of campaigning before Americans go to the polls on November 3. Photo: Getty

President Donald Trump and Joe Biden have traded barbs and urged last-minute voters to head to the polling booths on the final day of a polarising US election campaign.

While Mr Trump again threatened legal action to stop counting beyond election day, Mr Biden, the former vice president in the Obama administration, said there was nothing the President could do to stop Americans expressing their view.

If counting in the Pennsylvania ballot counting takes several days, as is permitted, Mr Trump has claimed that “cheating can happen like you have never seen”.

The two candidates delivered their final messages before the official polling day, with Mr Biden again drawing attention to Mr Trump’s handling of the pandemic.

He declared that “the first step to beating the virus is beating Donald Trump,” as he promised to leading infectious disease expert, Dr. Anthony Fauci, who Mr Trump has threatened to fire.

in Pittsburgh, Mr Biden told a mostly black audience that COVID-19 was a “mass casualty event for black Americans”.

The President angrily complained of the media’s coverage of his campaign and said he was also was being treated unfairly by the Electoral College system, China and even rock singer Jon Bon Jovi.

“I have been under siege illegally for three-and-a-half years. I wonder what it would be like if we didn’t have all of this horrible stuff. We’d have a very, very calm situation,” Mr Trump said in Michigan.

Both campaigns insist they have a pathway to victory, although Mr Biden’s options for winning the required 270 Electoral College votes are more plentiful.

Mr Trump, meanwhile, is banking on a surge of enthusiasm from his most loyal supporters in addition to potential legal manoeuvres.

Mr Trump, who is trailing in national opinion polls, has continued to lob unfounded attacks at mail-in ballots, suggesting he would deploy lawyers if states are still counting votes after election day.

His deputy campaign manager, Justin Clark, says the campaign would fight any Democratic attempt to “subvert state deadlines for receiving and counting ballots”.

“Under no scenario will Donald Trump be declared a victor on election night,” she said.

The election has already prompted an unprecedented wave of litigation over whether to adjust voting rules in light of the COVID-19 pandemic.

On Monday local time, a federal judge in Texas rejected a Republican bid to throw out about 127,000 votes already cast at drive-through voting sites in the Democratic-leaning Houston area.

At a rally in Scranton in eastern Pennsylvania, Mr Trump reminded an enthusiastic crowd he won the state in 2016 despite polls suggesting he would lose and warned that election officials’ plan to count ballots up to three days after election day was a “dangerous situation”.

“You have to have a date. You can’t extend dates,” he said.

In the western Pennsylvania town of Monaca, Mr Biden told supporters the country’s future rested in their hands.

“What happens tomorrow will determine what this country will look like for generations,” he said.

Despite Mr Biden’s national lead, the race in swing states is seen as close enough for Mr Trump to still piece together the 270 votes needed to prevail in the state-by-state Electoral College system that determines the winner.

Mr Biden, 77, who has made Mr Trump’s handling of the pandemic the central theme of his campaign, spoke in Ohio and Pennsylvania to much smaller gatherings.

He was set to hold an evening drive-in rally in Pittsburgh alongside singer Lady Gaga.

The latest Reuters/Ipsos poll in Florida, a perennial swing state, showed Mr Biden with a 50 per cent-46 per cent lead, a week after the two were in a statistical tie.

Early voting has surged to levels never before seen in US elections.

A record-setting 97.3 million early votes have been cast either in person or by mail, according to the US Elections Project.

The number is equal to 70 per cent of the entire voter turnout for the 2016 election and represents about 40 per cent of all Americans who are legally eligible to vote.

That unprecedented level of early voting includes 60 million mail-in ballots that could take weeks to be counted in some states, meaning a winner might not be declared in the hours after polls close on Tuesday local time.

In a sign of how volatile the election could be, buildings in several cities were boarded up, including around the White House in Washington and Macy’s flagship New York department store.

Mr Trump will wrap up his campaign in Grand Rapids, Michigan, the same place he concluded his 2016 presidential run.

Biden is spending Election Day in Pennsylvania, with stops in Scranton, his childhood home, and Philadelphia.