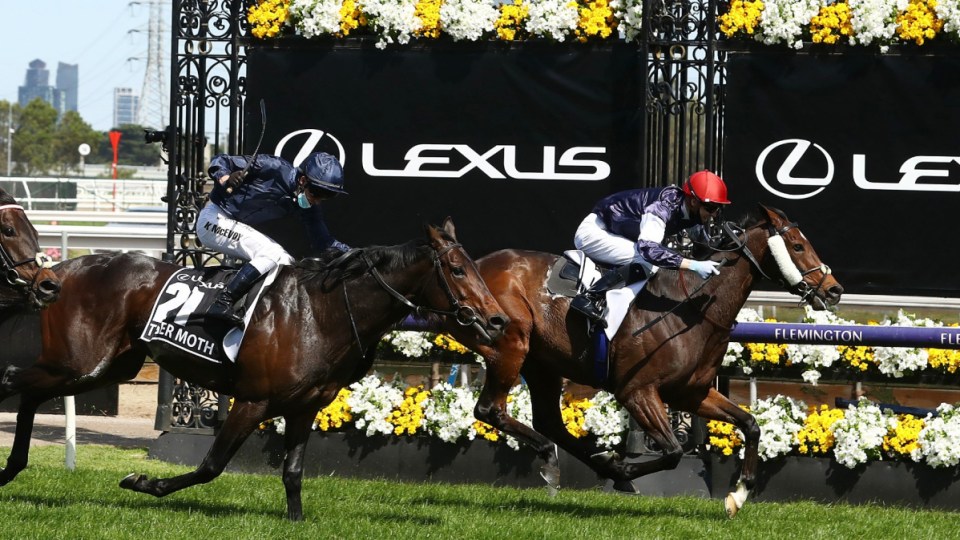 Irish-trained Twilight Payment has taken out the Melbourne Cup, beating an international-class field to claim the $8 million race at Flemington.

Jockey Jye McNeil, his first ride in the Melbourne Cup and Twilight Payment’s seventh win, told Network Ten there were “too many emotions … It’s a very big moment,” he said.

Travelling foreman Mark Power said “there could have been 200,000 people up in their stands today, and you won’t get the feeling any better than it is now,” he said.

Ten’s Matthew Hill, who called the race, described McNeil delivering a “dashing ride” on board the eight-year-old bay gelding, a horse with only seven wins from 30 starts with prizemoney of just $858,071.00.

McNeil rode a heady race from the front after taking Twilight Payment to the lead as the field passed the winning post the first time.

He increased the pace from the 1000m and sent his mount out to a clear advantage as the field swung into the straight.

From there, McNeil said he was confident Twilight Payment could keep the momentum going despite Tiger Moth and Prince Of Arran closing hard.

“I was confident. I was trying not to use the whip too many times,” said McNeil, a winner in his maiden Cup ride.

“And also I was trying to use my voice to encourage him as much as possible.

“It was a matter of hanging on, and he was very tough.

“To be able to get the opportunity from the Williams family to partner Twilight Payment today – not only them, but also Joseph O’Brien, who’s done a fantastic job preparing him.

O’Brien thwarted his famous father’s bid for Melbourne Cup glory once again for the second time in a training career still in its infancy.

O’Brien claimed a Melbourne Cup that was expected to fall to the all-conquering stable run by his father Aidan.

But it was Twilight Payment who lapped up one of the world’s most celebrated staying contests to lead in an all-international finish and beat his father’s horse Tiger Moth and the English-trained Prince Of Arran.

The younger O’Brien won his first Melbourne Cup in 2017 when Rekindling beat Johannes Vermeer, trained by his father.

Twilight Payment also confirmed Lloyd Williams’ place as the most successful owner in Melbourne Cup history with his seventh victory.

Despite the familiarity about the result for Williams, it was a Melbourne Cup like no other.

For the first time in its rich history, the 160th Melbourne Cup was run against a surreal backdrop as Flemington Racecourse was closed to racegoers as part of the state government’s suite of measures to tackle the coronavirus pandemic.

Except for trainers, jockeys and key racing personnel, Flemington was empty and the atmosphere a long way removed from the one generated by 100,000 racegoers who usually converge on the racetrack.

Before the race program began on Tuesday morning at 10am, VRC boss Amanda Elliott told the ABC it was going to be an “emotional” day.

“It is, because one of the great moments of the Melbourne Cup every year is that roar of the crowd as they get more and more excited just before the barriers crash open and those 24 marvellous animals emerge
to try and win the great prize.

“It is emotional … but it will be marvellous,” she said.

“If it’s survived world wars, other pandemics, Spanish flu, equine influenza, and about three global depressions, there was no way that this particular pandemic was going to stop the Cup.

“We’ve had 180 years of continuous racing at Flemington, and we’re running the 160th Melbourne Cup today. I’m so delighted we’ve got here. Obviously there was always a risk that it wasn’t going to, but we actually planned for people, we planned all year.

“It got less and less likely that we were going to have big crowds, and obviously we ended up not having any. But I tell you what, it has not diminished the quality of the racing at all,” she said.

The decision to ban crowds was slammed by veteran horse trainer Gai Waterhouse, telling Sydney radio 2GB Australia was being “cut off at the knees”.

“We have to get on with it,” Ms Waterhouse said.

“By all means social distance … but you can’t have the country cut off at the knees. People can keep their space, wash their hands, wear masks if they want to.”