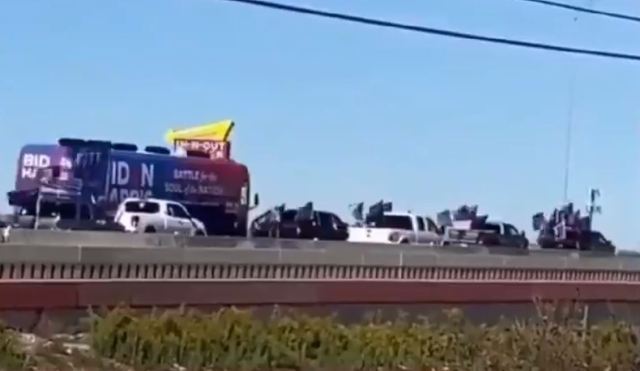 Trump supporters appear to swarm the Biden bus as it makes its way on Interstate 35. Photo: Twitter

The FBI is investigating after a Democratic bus carrying campaign staff was swarmed by a convoy of Trump supporters in an apparent act of “intimidation” in Texas.

Former vice president Joe Biden denounced the disruptive demonstration on Interstate 35 between San Antonio and Austin on Friday local time, labelling the ambush as something a presidential campaign had never before experienced.

“We’ve never had anything like this. At least we’ve never had a president who thinks it’s a good thing,” said Mr Biden, 77, while campaigning in Philadelphia on Sunday.

Seeking re-election, US President Donald Trump, 74, retweeted a video of the incident with the message, “I LOVE TEXAS!”, prompting the Biden campaign to cancel at least two of its Texas events as Democrats accused the President of encouraging supporters to engage in acts of intimidation.

“In my opinion, these patriots did nothing wrong. Instead, the FBI & Justice should be investigating the terrorists, anarchists, and agitators of ANTIFA, who run around burning down our Democrat run cities and hurting our people!”

Video showed a swarm of pick-up trucks and SUVs bearing pro-Trump flags surrounding the Biden campaign bus and apparently tried to force the bus to slow down and to run it off the road.

One video clip aired on CNN showed a Trump-flagged pick-up swerve into the side of another vehicle travelling just behind the bus, which was reportedly being driven by a Biden campaign staffer.

The campaign said staff called 911 and local law enforcement assisted the bus in reaching its destination.

Neither Mr  Biden nor his running mate, Senator Kamala Harris, was aboard the bus.

“FBI San Antonio is aware of the incident and investigating,” an FBI spokeswoman told Reuters.

The confrontation came as polls showed an unexpectedly tight race between Mr Biden and Mr Trump in Texas, which has long been a Republican stronghold.

US battleground states hit by both camps

Mr Trump has sprinted across US battleground states with appearances in Iowa and Michigan two days before election day as he seeks to rally past Democratic challenger Mr Biden, who in pivotal Pennsylvania implored his supporters to turn out to vote.

Mr Trump, aiming to avoid becoming the first incumbent president to lose a re-election bid since fellow Republican George HW Bush in 1992, had a frenetic schedule for Sunday, with stops also planned in North Carolina, Georgia and Florida.

Mr Biden leads in national opinion polls though the race is seen as close in enough battleground states that Mr Trump could achieve the 270 votes needed to win in the state-by-state electoral college that determines the overall victor.

Mr Biden made the latest in a series of appearances in closely contested Pennsylvania, the state where he was born.

Every day – every day – is a new reminder of how high the stakes are, of how far the other side will go to try to suppress the turnout, especially here in Philadelphia.’’

“We have to earn our democracy. We have to get out and vote,” Mr  Biden said at a drive-in rally in a car park outside a Philadelphia church.

“We’re at an inflection point. So we have to vote like we never did before.”

Love is in the air

Buffeted by snow flurries in Washington, a town north of Detroit, in his first appearance of the day, Mr Trump wore his trademark Make America Great Again cap and was bundled up in an overcoat as he addressed the boisterous crowd.

After the crowd chanted, “We love you” Mr Trump responded, “I love you, too. If I didn’t, I wouldn’t be standing here because it’s freezing out here.”

“You better get out there and vote,” Mr Trump told the crowd.

Mr Trump predicted he would repeat his 2016 victory in Michigan and touted his efforts to create auto jobs, a key issue for the auto manufacturing state.

Motor vehicle manufacturing employment in Michigan has fallen by about 5000 jobs since Mr Trump took office, and there are about 13,000 fewer jobs making vehicle parts.

He then addressed another spirited rally in windy Dubuque, where he made his pitch to Iowa farmers, predicting he would win there as he did four years ago.

Biden was ahead 51 per cent to 43 per cent nationally in the latest Reuters/Ipsos poll, taken October 27-29.

A coronavirus pandemic that has killed more than 230,000 Americans and battered the economy has weighed on Mr Trump’s campaign.

In his 2016 victory over Democrat Hillary Clinton, the real estate developer and reality TV personality-turned-politician took Pennsylvania and Wisconsin as well as Michigan, states that for decades had gone in the Democratic column.