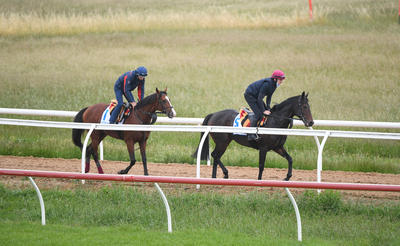 Aidan O’Brien has settled on untapped potential and established quality as the Irish training maestro tries to win the Melbourne Cup for the first time.

O’Brien went close to winning last year’s Cup with Il Paradiso and two of the favourites in Tiger Moth and Anthony Van Dyck will represent the champion trainer’s famous Ballydoyle stable on Tuesday.

Anthony Van Dyck won the 2019 English Derby and ran second to Verry Elleegant in the Caulfield Cup while Tiger Moth will attempt to win the Melbourne Cup at only his fifth start.

O’Brien’s son Joseph won the 2017 Melbourne Cup with Rekindling at that stayer’s 10th start while 2018 winner Cross Counter saluted for Godolphin at his eighth appearance.

O’Brien’s travelling foreman TJ Comerford said the camp had no concerns about Tiger Moth’s lack of race experience, suggesting a stable quinella at Flemington was possible.

“To have one runner is great, to have two in it is better again,” he said.

“It’s grand, it’s a great race. We’ve always run well in the race, our horses have competed well. It’d be great to win it but it’s not as simple as that.

“I wouldn’t have one over the other even if you give me a free bet there I might struggle.”

Another O’Brien, local trainer Danny O’Brien, will again stand in the way of the Irish challenge after winning last year with Vow And Declare.

Vow And Declare will be one of the Flemington trainer’s four runners along with Russian Camelot, Miami Bound and this year’s Adelaide Cup winner King Of Leogrance.

Russian Camelot has been near the top of Cup betting since winning the South Australian Derby in May but Vow And Declare has struggled to recapture his 2019 form.

Vow And Declare was well beaten in the Caulfield Cup but O’Brien has changed a few things to get the five-year-old back near his best.

“We’re putting blinkers on him because it might sharpen him up a bit,” O’Brien said.

UK marvel Prince Of Arran will again provide stiff competition for the favourites in his third Melbourne Cup.

Prince Of Arran ran third in the 2018 Melbourne Cup before he was promoted to second on protest last year and is among the favoured runners again after surging home at his Australian return.

The popular stayer finished strongly for fourth behind Verry Elleegant in the Caulfield Cup at his first run since early September.

Trainer Charlie Fellowes has remained in the UK this year but travelling foreman Aled Beech said Prince Of Arran had done well since the Caulfield Cup.

“He came out of the race very well,” Beech said. “He put the weight back on that he lost very quickly.

She will attempt to become the second female jockey to win the Melbourne Cup after Michelle Payne won the great race on Prince Of Penzance in 2015.