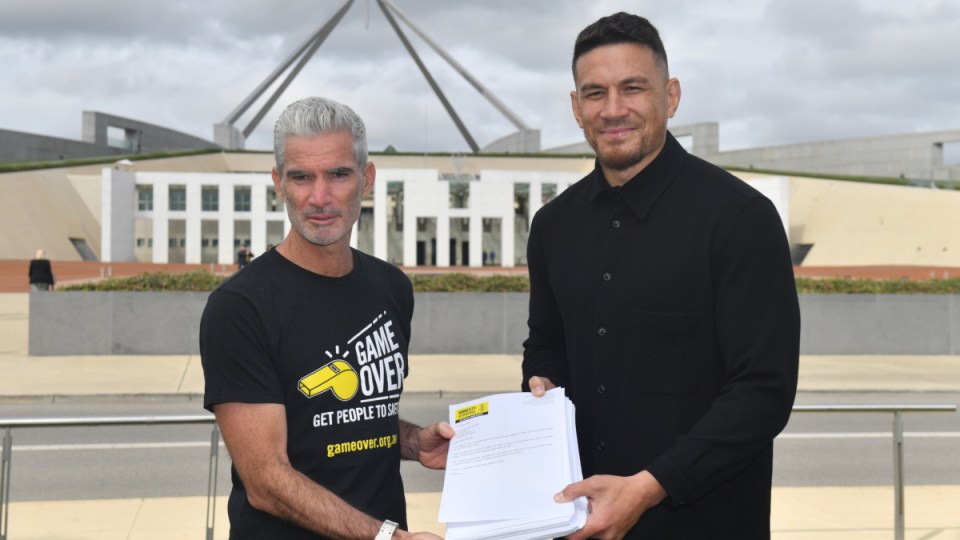 Rugby superstar Sonny Bill Williams has appealed for refugees in Australian-run offshore detention to be allowed to resettle in New Zealand, asking the Prime Minister to give them “a fair go”.

Mr Williams has thrown his considerable weight behind a campaign from Amnesty International, joining fellow sports personality Craig Foster in calling for Australia to finally accept the standing offer from NZ leader Jacinda Ardern to take in 150 refugees per year.

“Brother Scotty just needs to sign that paper and whoever it is, we just need to get it done,” Mr Williams said at a Parliament House event in Canberra on Wednesday.

Today I stand with @Craig_Foster & @amnestyOz . We’re calling on the Aus PM to accept NZ’s offer of resettlement so people can rebuild their lives. @ScottMorrisonMP please #acceptNZ & call #gameover . pic.twitter.com/7YrGBrMfVq

Refugees and asylum seekers who arrived in Australia on boats were sent to Manus Island and Nauru from 2013, with the federal government flatly rejecting them from ever being able to settle on the mainland.

The detention centres there have been wound down, and many of the refugees there have been accepted to transfer to the United States, Canada or countries through Europe, but hundreds still remain living on Manus and Nauru.

The agreement for the US to take Australian refugees is also coming to an end shortly, and refugee advocates fear many will be left in limbo without any option to move to another country.

New Zealand has offered since 2013 to accept 150 refugees per year from Australia. The federal government has consistently rebuffed the offers, claiming that accepting NZ’s opportunity could be an incentive for people smugglers’ illegal boat trade to restart.

Amnesty and Mr Foster began the ‘Game Over’ campaign to put pressure on the government to accept the offer.

Accept the #NZ offer @ScottMorrisonMP and let hundreds of refugees get to safety. 8 years is too long. The solution has been available for 7 years, take it. And end the suffering for people offshore and on @SonnyBWilliams #GameOver pic.twitter.com/RJrKJMO2jL

The code-hopping Mr Williams was born in New Zealand, and has represented the country in rugby league, rugby union and boxing in a storied sporting career. He said he wanted the Australian federal government to work harder in resettling refugees still on Manus Island and Nauru.

“Ask yourselves why we’re up in arms about going into quarantine for two weeks. I’ve done that with four kids, and it’s pretty tough, but there was light at the end of the tunnel,” Mr Williams said.

“I knew after the two weeks, I could see my family and friends. Imagine doing it for seven years. Imagine being in that and knowing there’s no light at the end of the tunnel, not knowing where you’ll end up. That’s a scary proposition.”

Mr Williams, who courted controversy in the earlier parts of his career with off-field incidents and skipping out of an NRL contract to chase big money in French rugby, has become more vocal about humanitarian issues in recent times. He has spoken in support of the oppressed Uighur Muslim minority in China, spent time as a Unicef ambassador in Lebanon, and won respect for a series of selfless gestures in and out of the sporting arena.

“Scotty, just give them a fair go,” he said in Canberra.

“There is a solution in New Zealand. We should take it.”

Mr Williams and Mr Foster presented an Amnesty petition, with 65,000 signatures, to a large group of Greens and Labor politicians who had gathered for the event on the front lawn of Parliament House.

“There are still just under 300 people stranded on PNG and Nauru and as the deal with the US is about to come to an end it is more urgent than ever we get these refugees to safety as soon as possible,” Mr Foster said.

“Australians across the country have been asking for this for many years. The mental and physical anguish these people have suffered has been terrible and it’s time for the Australian government to do the right thing and accept the New Zealand offer.”

This morning I met with @Craig_Foster, Sonny Bill Williams, @amnestyOz and so many @AustralianLabor and cross bench colleagues – to join 60,000+ Australians in saying, enough is enough.

It’s time to accept NZ’s resettlement offer, 7 long years after it was first made. pic.twitter.com/SOUkKFDf9i

The two sporting stars kicked a soccer ball and threw around a footy with politicians, journalists and fans for half an hour at the event. MPs also lined up for the chance for a photo opportunity with the towering Mr Williams, who has won two NRL grand finals and two rugby World Cups.

Labor MP Mike Freelander posed with him for a picture as they both clutched a football.

“How about one of us boxing?” the Member for Macarthur asked with a smile, throwing up his fists in a play-fight style.

“Nah, I’m good bro,” Mr Williams said with a grin, turning to the next politician in line.