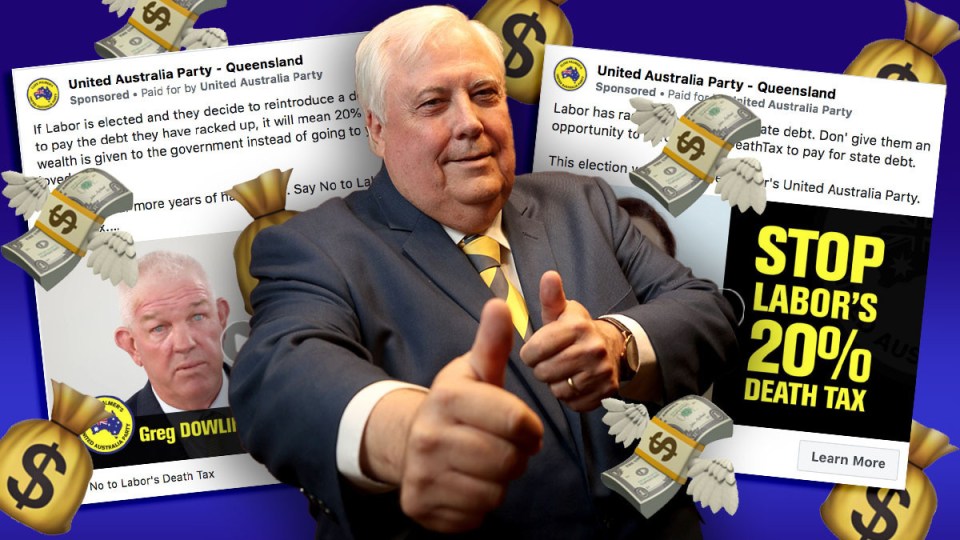 Billionaire mining magnate and political pest Clive Palmer is outspending every other political party in the country on Facebook ads before the Queensland election, sharing discredited claims about a Labor death tax.

Mr Palmer, the former federal member for Fairfax, is running candidates in 50 seats in Queensland’s state election, under the lurid yellow banner of his United Australia Party.

However, the UAP is not expected to win a seat at Saturday’s state poll.

Instead, Mr Palmer’s presence is seen as a “spoiler”, an excuse for him to launch attacks on Labor to benefit the Liberal opposition.

That was the role he played during the 2019 federal election, when a massive ad spend involved billboards, media ads and spam text messages imploring voters to not support Labor.

In October, a pricey UAP advertising campaign has shared discredited claims that state Labor would legislate a “death tax”, or tax on deceased estates.

You might remember this claim – also discredited – was made against federal Labor at the 2019 poll.

“None of his ads are about winning seats for his own party, it’s all about trying to elect the LNP. It’s all a lie,” Queensland Labor senator Murray Watt told The New Daily.

“This is Clive Palmer using his millions of dollars to scare the elderly, and quite frankly, what Clive Palmer is doing right now is bullsh-t,” state Tourism Minister Kate Jones said on Tuesday.

But that’s not deterring him.

Analysis of data from Facebook’s advertising system shows Mr Palmer is not only outspending both major parties on online ads, but outspending every other political organisation in Australia in the past month.

The only advertiser placing more Facebook ads? Gambling agency Sportsbet, which is encouraging Aussies to place wagers on the US election.

The “death tax” claims appear in dozens of ads, all launched in the past fortnight.

Facebook ads can be targeted to specific audiences, filtered by factors such as age, gender, location and interests.

In one video, displayed with varying accompanying text to 14 groups of people, Mr Palmer’s wife Anna – deputy leader of the UAP – asks supporters to “stop the death tax”.

That ad alone was potentially served up on newsfeeds 3.4 million times in Queensland in just the past few days, according to ad metrics.

Mr Palmer’s sudden ad blitz has become a key election issue just days from the poll, forcing Labor on the back foot.

“No Labor government will introduce a death tax. We never have. We never will,” Ms Jones said.

Queensland Premier and Labor leader Annastacia Palaszczuk promised “it is just not true”.

“I just urge Queenslanders, ignore Clive Palmer. Clive Palmer, Deb Frecklington, the LNP, they’re all in this together,” she said Tuesday.

Clive Palmer’s claim about a death tax is a lie. pic.twitter.com/cQHskaxjEn

Ms Frecklington said Mr Palmer’s death tax blitz had nothing to do with the LNP, adding “I’ve never met the man and I’ve got no intention to”.

Mr Palmer and the UAP were contacted for comment.

Chief executive Mark Zuckerberg said last year “people should be able to see for themselves what politicians are saying”.

“Political speech is some of the most scrutinised content on our platform, which ensures that people are held accountable for their words. While we don’t fact check politicians’ ads we still require them to comply with our ads policies,” a Facebook spokesperson told TND.

The social media giant has come under fire in the US for how it treats politicians’ posts, treading a fine line between addressing misinformation and not impinging free speech.

That debate has not yet unfolded in Australia to the same extent.

There are strict electoral laws on political communication and ads here, but many of those safeguards do not apply online.

Senator Watt said it was “disappointing” Facebook would allow such ads to appear.

“It shows a gap in our laws, that a billionaire can spend his fortune spreading lies and get away with it,” he said.

“It shows our media laws and electoral laws haven’t kept pace with the change in technology.

“I can’t think of any reason why political parties should be able to say things on social media they can’t say in traditional media.

He’s also a member of Facebook’s independent oversight board. He said Australia needed to discuss truth in political advertising.

“Australia hasn’t seen the same type of high-profile controversies as in the 2016 US election, so there’s been less attention on political advertising, but it’s an area of major concern,” he told TND.

“There are gaps in Australian law that make it difficult to apply laws to social media that we apply on traditional media. There are big, problematic carveouts.”

Professor Suzor said it was an area the Australian government should deal with.

“As we try to bring media laws into alignment across traditional and online media, there are opportunities for reform,” he said.

“The potential for disinformation, voter suppression and interference with elections is something that many people are worried about, and which the oversight board is tracking closely.”