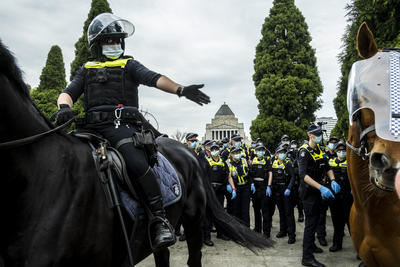 A woman who allegedly kicked a police horse has been charged with animal cruelty following last Friday’s anti-lockdown protest in Melbourne.

Police arrested the 29-year-old from Werribee on Sunday after executing several search warrants.

A 24-year-old Bentleigh man also faces several charges after he allegedly broke the side mirror of a police car during the protest.

He was charged with criminal damage, hinder police, intimidate a police officer and possess cannabis.

They were bailed to appear in Melbourne Magistrates Court on March 23.

Police have released several photos of people as they continue to investigate incidents from the protest.

The two charges follow 16 arrests and 61 fines on Friday.