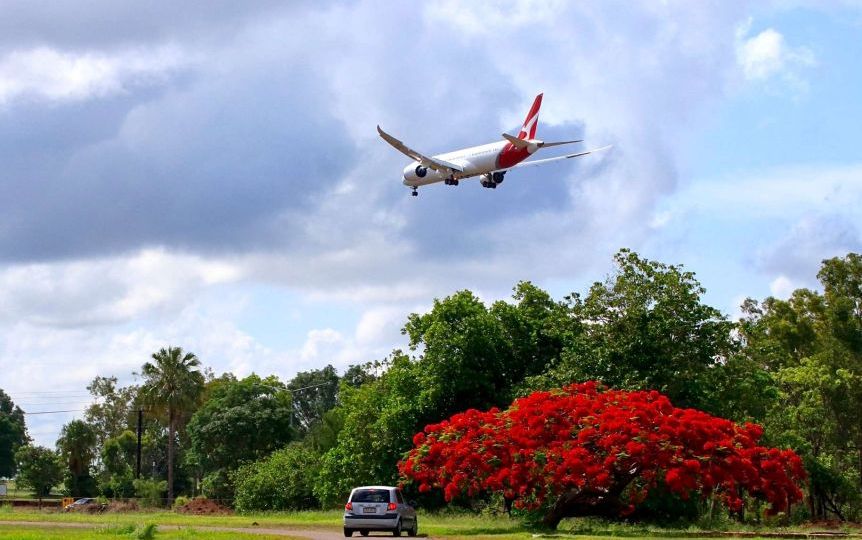 There were 183 people onboard the repatriation flight from New Delhi. Photo: ABC News: Ashleigh Abram

A special repatriation flight carrying 183 Australians who had been stranded in India has landed in Darwin, where they will begin a two week quarantine process in the Northern Territory.

The flight, QF112, is the second of eight special Qantas flights, chartered to repatriate Australians from South Africa, Europe and India.

The plane was scheduled to land at 8.20am AEST on Tuesday but touched down on Australian soil at 9.51am – its passenger list including 62 children, 18 of whom were under 2.

All 183 passengers will be transferred directly from a RAAF part of the airport to the Howard Springs quarantine facility, where they will undergo 14 days of mandatory quarantine.

On Friday, a repatriation flight with 161 Australians, including 22 children, touched down in Darwin from the United Kingdom.

These passengers are already in quarantine in Howard Springs, and to date none of the 161 travellers have tested positive to COVID-19.

The NT Government will provide an invoice to all repatriating Australians, on behalf of the Commonwealth, charging people for their stay at the quarantine facility.

Individuals will be billed $2,500 and families $5,000 and anyone found breaching quarantine regulations also may be issued a fine.

Travellers are not allowed to bring alcohol onto the site and recreational items such as inflatable swimming pools, bikes, and scooters are also banned.

Quarantines need to keep a distance of 1.5m from all people — except their spouse or child — at the facility and need to wear a mask if they leave their allocated room.

Repatriated residents can use a small balcony outside their rooms, but are not allowed to leave the space and walk around the facility.

There are six more repatriation flights into Darwin expected in coming weeks, from the UK, India and South Africa, with priority seating given to vulnerable passengers.

The eight flights are set to bring 1,300 Australians home, but more than 30,000 Australians who want to return home are still thought to be stuck overseas.

On Friday, Federal Foreign Affairs Minister Marise Payne told ABC Local Radio Darwin the Federal Government was still working through whether it would consider rolling out more special flights after the initial eight.

“India has been a particularly difficult challenge for many Australians, there haven’t been any commercial flights from India since March except for a number of repatriation flights,” she said.

“But it’s very important for those families who are seeing those loved ones return.”

To date, 34 people have tested positive to COVID-19 in the Northern Territory, but all have now recovered.