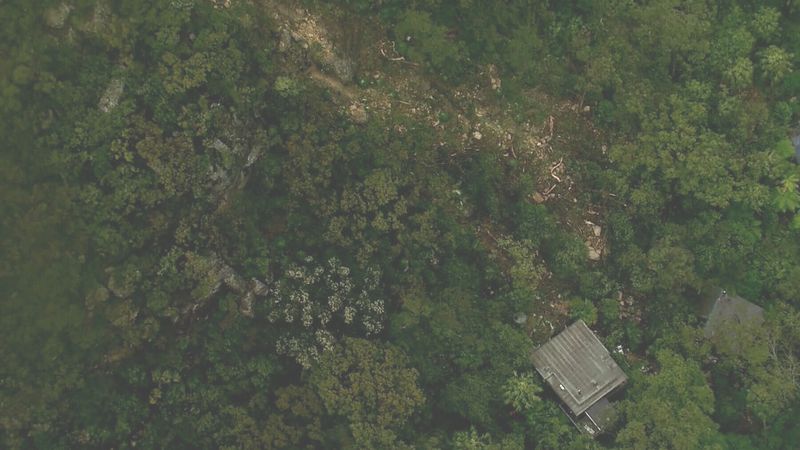 Thousands of SES volunteers are on standby as severe storms wreak havoc across NSW, with residents in Sydney’s north forced to evacuate after a landslide threatened homes at a popular walking trail.

NSW SES crews were called to homes at Mackerel Beach in the Ku-Ring-Gai national park near Palm Beach after a landslide, Nine News reported.

At least three properties were damaged and residents of 15 homes were evacuated.

Further north, a severe weather warning has been issued for parts of the NSW Hunter region as heavy rain, high winds and cooler conditions continue to lash the coast, causing hazardous surf conditions.

On Monday, the Bureau of Meteorology said heavy rainfall in the Hunter was expected to cause flash-flooding with damaging winds averaging 60 to 70km/h with peak gusts in excess of 90km/h possible on the coastal fringe.

Meanwhile, more than 2.24 million lightning strikes had been registered across the country in the past 48 hours.

“Most of the lightning occurred in NSW, Queensland and the Northern Territory, with more storms on the way this week.” the BOM tweeted.

“A trough that has brought rain and showers since Friday … will continue until at least next weekend,” the BOM said.

The SES received almost 200 calls for help in the past 24 hours and three millimetres of rain had already hit Sydney on Monday morning.

The bad conditions will continue to buffet the coast with gusts of up to 70 to 80 km/h likely.

Temperatures dropped to 15 degrees, down about eight degrees for this time of year, due to a cold front which saw almost 10cm of snowfall in the alps.

“We do have some hazardous conditions at the moment for the beaches with the strong southeasterly winds whipping up a bigger southeasterly swell up to around four, potentially five metres,” BOM spokeswoman Rebecca Kamitakahara told ABC radio.

“The good news is later in the week we will start to see a little more sunshine … with those temperatures coming back up to what we’d normally expect at this time of year.”

But the rain has brought relief for farmers across the western ranges and areas west and south-west and parts of the central west.

“They’re not seeing as quite as high rainfall totals as what we’re getting on the coast but they are still seeing some more steady, persistent rain on top of what they saw on the weekend.” Ms Kamitakahara said.

The rain overnight resulted in the closure of several roads in Sydney’s north, with Wakehurst Parkway shut in both directions from Oxford Falls to North Narrabeen, due to flooding.

Galston Road is closed in both directions after a rockfall west of a bridge and drivers are being told to divert.

A severe thunderstorm and heavy rain warning that could lead to flash flooding, damaging winds and large hailstones has been issued for Lismore, Grafton, Casino and Yamba on the state’s north coast.

Gale warnings have been issued for the Hunter coast, Sydney coast and Illawarra coast alongside strong wind warnings for Sydney waters, the Macquarie coast, Batemans coast and Eden coast.

A damaging wind warning has been issued for parts of the southern tablelands, southwest slopes, Snowy Mountains and Canberra.

Surf and swell conditions will be hazardous for rock fishing, boating, and swimming with NSW Police warning people to stay out of the water and avoid walking near surf-exposed areas.