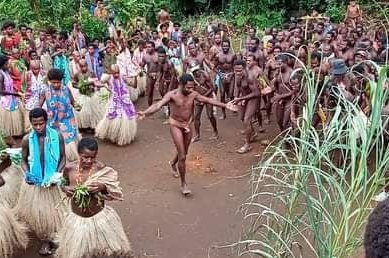 Witnol Benko says his account was blocked for weeks after he posted this image of a Vanuatu traditional ceremony.

Witnol Benko is worried about posting certain images from his home island on Facebook.

Some photos taken in Vanuatu have already been labelled a violation of Facebook’s nudity and sexual activity standards, and he said his account had been blocked for weeks as a result.

But the pictures are not lewd or explicit.

They depict cultural ceremonies where women are dressed in grass skirts and not much else, or photos from Vanuatu’s Indigenous villages where men wear nambas or penis sheaths.

“It was with a pig-killing ceremony, where they were dancing and the chief was dancing,” Mr Benko told the ABC’s Pacific Beat, recalling one of the blocked images.

“Those pictures are appropriate to me because it’s part of my culture, but to Facebook it’s not appropriate.”

A Facebook spokesperson told the ABC that two of Mr Benko’s images were removed “in error” by its automated system, and has apologised for the mistake.

The company did not address the question of whether they blocked his account, but said the images have now been restored.

But for Mr Benko, Facebook’s policies need to be improved to take better account of cultural nuances.

Until then, he fears being blocked again.

“Those who are working at Facebook should understand that we have different cultures around the world,” Mr Benko said.

“I’m pretty confused as to what to do next.”

In an August report, Facebook said the platform was using “proactive detection” to automatically identify and hide harmful images, instead of relying on other users to report posts they find distressing.

“These systems have become even more important during the COVID-19 pandemic with a largely remote content review workforce,” Jeff King, Facebook’s Director of Product Management, wrote.

This automation has led to more content being targeted and removed by the platform for violating community standards.

Between April to June, that figure had more than doubled to 22.5 million.

But as Mr Benko’s case reveals, this AI technology is also causing images of Indigenous Pacific bodies to be incorrectly targeted and removed, even though that nudity does not violate Facebook’s standards.

Digital media researcher Fiona Martin, from the University of Sydney, said there could be negative consequences if the machine-learning algorithms used to moderate social media content weren’t “culturally nuanced”.

“I think it’s really important that not only Facebook, but all of the social media platforms, start to take into account the cultural specificity of images and visual communication.”

Mr Benko is not the only Pacific user who has been tangled up in Facebook’s AI system.

In 2018, an image of Melanesian warriors taken by Australian photojournalist Ben Bohane was also blocked on the platform, sparking accusations that Facebook was not respecting Pacific culture.

And earlier this year, Facebook blocked users from sharing an International Federation of Journalists article on press freedoms in the Pacific, which included an image of West Papuan protesters dressed in traditional outfits.

David Robie, director of the Pacific Media Centre, was blocked from sharing the article on Facebook.

He called the experience a “tyranny of algorithms”, and believes people who wanted to stop information about West Papuan protesters were able to exploit Facebook policies for their own political goals.

“The photo is clearly not nudity in the accepted sense,” Mr Robie said.

“The FB [Facebook] block was an excuse to delete the entire news item to prevent readers reading the items about Papuan news media censorship and blackouts.”

Mr Robie was particularly frustrated that appeals to Facebook to overturn the decision were not answered, a situation Mr Benko also encountered when trying to unblock his account.

“They said they’d review the content and come back to me, but they never came back to me. They just put my account back,” Mr Benko said.

“It would be really helpful if there were more direct market specialist contacts in local areas for the platforms,” Dr Martin said.

“If these platforms want to benefit from user-generated content, they need to be accountable to users for their content regulation.”