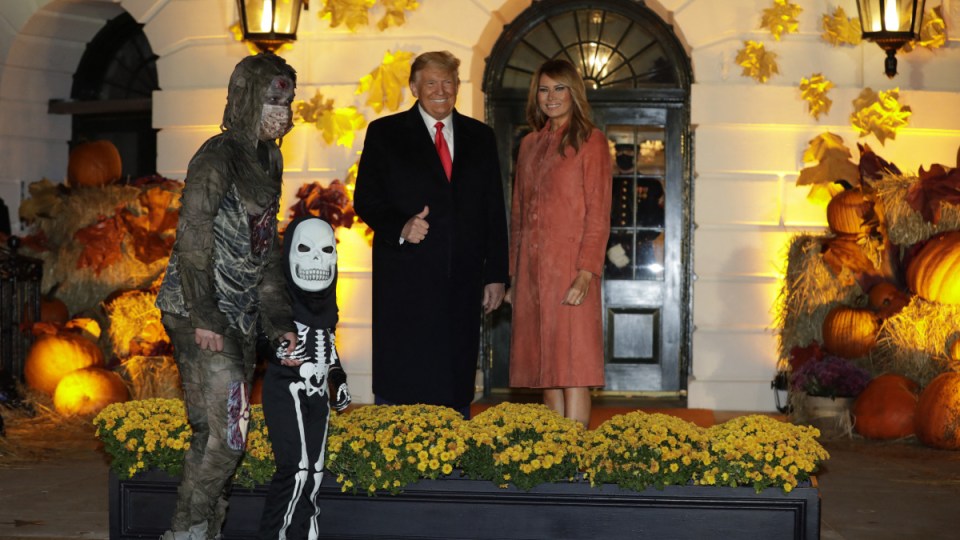 Socially distanced yet maskless, the Trumps managed to meet dozens of children and their parents. Photo: AAP

US President Donald Trump has taken time out from the final week of the election campaign to welcome ghouls and ghosts, and even minature versions of themselves, for the annual Halloween celebration at the White House.

Despite both testing positive to COVID-19, the Trumps were maskless as they stood between decorative piles of pumpkins and waved to the children and their parents.

Treats usually handed out by the President and First Lady were packaged in bags by White House staff wearing gloves, practising social distancing with a “no-touch” approach.

“Extra precautions have been put in place by the Trump Administration to help ensure the health and safety of all guests wishing to participate in this year’s spooky celebration,” a White House statement read.

As the military band played Michael Jackson’s Thriller to the crowd, the Associated Press reported Mr Trump was particularly pleased with a young boy with a distinctly “Trump head of hair” while his little partner did her best Melania impersonation.

The South Portico of the White House was decorated with bright-colored leaves in various shades of autumn, chrysanthemums and dozens of pumpkins.

The spooky celebration comes as the US records its highest number of new COVID-19 cases in the past two days, keeping the pandemic a top election issue as Vice President Mike Pence travels the country to campaign despite close aides testing positive.

The US reported 79,852 new infections on Saturday local time, close to the previous day’s record of 84,244 new cases.

Hospitalisations are also rising and have hit a two-month high and deaths are trending upwards, according to a Reuters tally.

So far in October, 29 states have set records for increases in new cases, including five considered key in the November 3 presidential election: Ohio, Michigan, North Carolina, Pennsylvania and Wisconsin.

Cases in the Midwest set a record on Saturday and the number of hospitalised patients in that region hit an all-time high for the ninth consecutive day.

Despite the outbreak, the White House said the vice president would press ahead with campaigning.

The new infections offered a reminder of the way Mt Trump – who was hospitalised for three nights this month after contracting COVID-19 – and those around him have downplayed the advice of public health experts to wear masks and observe social distancing guidelines to stem transmission.

The latest outbreak follows what health experts described as a super-spreader event at the White House on September 26 where Mr Trump announced his nomination of Amy Coney Barrett to the Supreme Court.