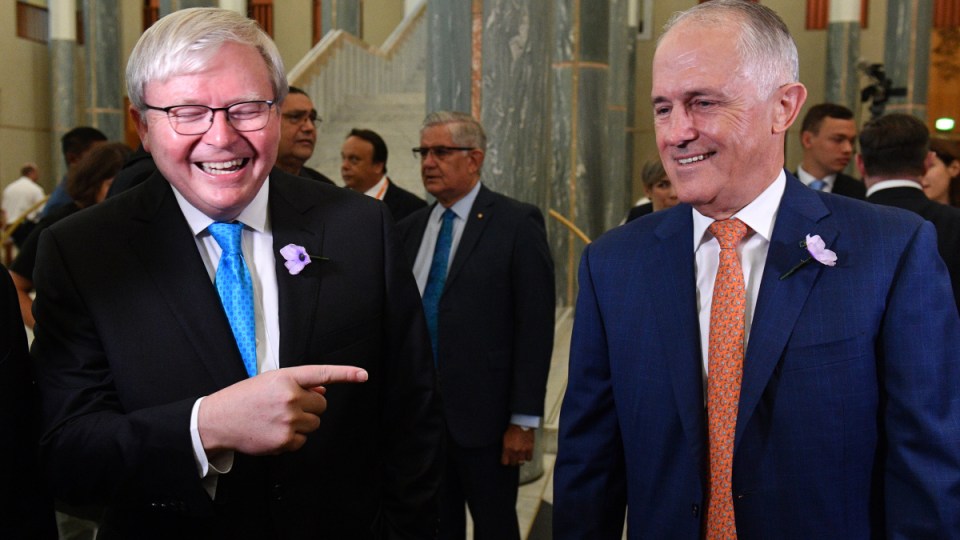 Another former prime minister is backing a push for a royal commission into the political influence of the Murdoch press – and this time it’s a Liberal calling for the probe.

Malcolm Turnbull has lent his support for former Labor leader Kevin Rudd’s petition for a robust investigation into media ownership and bias.

More than 380,000 people have signed the petition since it was launched a fortnight ago.

Kevin has done well to get this petition going. I doubt it will result in a Royal Commission and Murdoch’s print monopoly (since 1987) is only part of the problem. But I have signed it and encourage others to do so. https://t.co/TbY7vW3MSu pic.twitter.com/oyykAMWq5q

Mr Turnbull has made numerous interventions into national politics since leaving office two years ago, airing criticisms of his former Coalition colleagues and voicing concerns about what he perceives to be media bias.

The former PM, who was ousted in a party room coup and replaced by Scott Morrison in 2018, said on Sunday he had signed Mr Rudd’s petition.

The former Member for Wentworth tweeted that he doubted if a Royal Commission would eventuate from the campaign, but that he had “signed it and encourage others to do the same”.

In a follow-up tweet, Mr Turnbull said his reasons for backing the petition were “complex”.

He shared an excerpt from his recent book, A Bigger Picture, where he said Australia’s “media culture today is more debased than ever” and claimed “leading media proprietors” value “power over politicians”.

It’s complex but I have spoken and written about it many places and look forward to doing so again. I discuss it at some length in my memoir “A Bigger Picture” – a brief extract here https://t.co/3ppbT4jFRY pic.twitter.com/ij4AQgWoUP

Mr Turnbull is the latest former Liberal leader to back calls for an independent investigation into media ownership and bias.

Dr John Hewson told The New Daily earlier this month he would back a judicial inquiry, but stopped short of endorsing Mr Rudd’s calls for a full royal commission.

“But they’re not the only ones. Other networks and structures have influence … there are anomalies and favoured treatments in the way media ownership has been structured.”

Mr Rudd, Labor PM between 2007 and 2010 then again in 2013, claimed News Corp – which owns Sky News, the Daily Telegraph, Herald Sun, Courier Mail, The Advertiser and The Australian newspapers, and multiple radio stations – was a “cancer on democracy”.

On Sunday, Mr Rudd thanked Mr Turnbull, saying “good to have you on board”.

Good to have you on board, @TurnbullMalcolm. Supporting media diversity isn’t about left or right, Labor or Liberal, but preserving the lifeblood of our democracy.

11 days left to get our petition in front of as many Australians as possible. Please share: https://t.co/FjfK7ij7YQ https://t.co/CdnZArY5gU pic.twitter.com/xkHtPF2SkE

It’s an unlikely alliance between the Labor and Liberal politicians, but the pair have more in common than it might first seem.

Both came to power promising to modernise their parties, and enjoyed initial huge popularity before being knifed by their colleagues within several years, in disputes over energy policy.

“I’m calling on the Parliament to establish a royal commission into the abuse of media monopoly in Australia, and particularly by the Murdoch media, to make recommendations to maximise media diversity ownership for the future lifeblood of our democratic system,” Mr Rudd said in launching his petition.

He alleged “Murdoch media” had become “little more than a protection racket for the Liberal and National parties”.

Mr Rudd said he would host a Facebook Live discussion on his royal commission campaign on Monday.

Over the weekend he also took aim at Brisbane’s Courier Mail newspaper over a controversial story on Queensland Labor allegedly being under investigation for breaching electoral rules.

The state’s electoral commission has now confirmed “there is no indication that a breach of the Commonwealth Electoral Act 1918 has occurred”.

However, despite a second PM joining the calls, The New Daily understands federal Labor is unlikely to formally back the royal commission proposal.

Several Labor sources, who would not speak on the record, said this month that although some MPs supported an investigation into the issues raised by Mr Rudd, they did not want to publicly pick a fight with media organisations – and News Corp in particular.

That has not changed, despite the growing number of signatures on Mr Rudd’s petition.

Labor leader Anthony Albanese has politely rebuffed questions about whether his party would back the proposed royal commission.