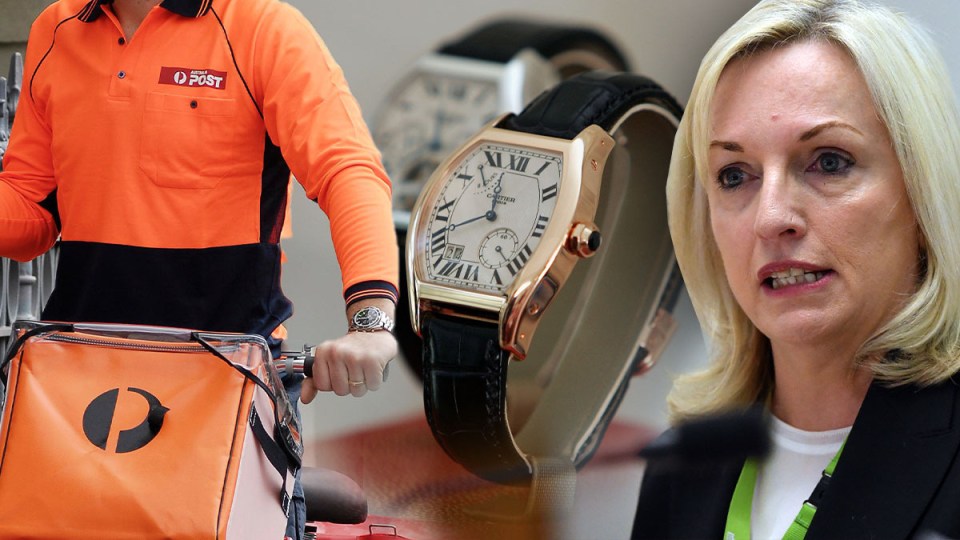 A furious Scott Morrison has ordered Australia Post’s chief executive to stand aside while opening a far-reaching investigation into the government-owned business after it was revealed four senior staff had been gifted designer watches for simply doing their jobs.

It’s the latest in questionable lavish spending from the postal service and comes after the decision to wind back deliveries and splash tens of thousands of dollars on events, entertainment and indoor plants.

“I was appalled, and it is disgraceful and not on,” Mr Morrison thundered in parliament on Thursday.

The Prime Ministerial fury came just hours after Australia Post boss Christine Holgate admitted the company had spent $12,000 on Cartier watches for four staff members in 2018 after they’d lined up a deal for customers to do banking at post offices.

Within the hour, Mr Morrison said Ms Holgate had been temporarily stood down from her role, pending an independent investigation.

The investigators will report to the PM.

“She has been instructed to stand aside. If she doesn’t wish to do that, she can go,” Mr Morrison said.

The watches were an “award” for staff who had been key players in a deal with major banks for the Bank@Post arrangement which allowed people to bank at post offices, Ms Holgate told Senate estimates.

She defended the luxury gift by saying staff had put in “an inordinate amount of work,” and also claimed it was not paid for by the taxpayer.

“I have not used taxpayers’ money, we are a commercial organisation,” she said.

"and if she doesn't wish to do that, she can go" https://t.co/KKtAlHRHrw pic.twitter.com/emRHp9aAnA

“As any shareholder would in a company raise their outrage if they had seen that conduct by a chief executive, the management or the board, they would insist rightly on the same thing,” the PM said in Parliament.

“We are the shareholders of Australia Post on behalf of the Australian people.”

Communications Minister Paul Fletcher and Finance Minister Mathias Cormann, who have joint oversight of Australia Post, said the investigation – which will be supported by an external law firm – is expected to report back within four weeks.

“The Government expects all government entities, including Government Business Enterprises, to act ethically and adhere to high standards regarding the expenditure of money, as the public also rightly expects,” the ministers said.

“The Chief Executive of Australia Post will be standing aside from her position for the duration of the investigation.”

Labor frontbencher Bill Shorten backed the government and called the decision to splash thousands of dollars on watches as “out of touch”.

Australia Post has come under intense scrutiny in recent months following a string of controversial decisions to cut back its delivery schedule – even as the pandemic and lockdowns vastly increased demand for online shopping and delivery.

Further, the board has come under fire for lavish spending on gifts, entertainment and events for staff.

It was revealed last week that, from January to July 2020, Ms Holgate authorised spending of more than $85,000 on such expenses. It was also reported this week Australia Post had spent more than $700,000 on indoor plants in the last two years.

The Community and Public Sector Union (CPSU), which represents Australia Post workers, called the watch scandal “the latest in a string of dodgy and selfish decisions made by management.”

The union noted that the company’s management had frozen workers’ wages and forced others to take leave during the pandemic while planning to give themselves bonuses.

That bonus decision was overturned after public outrage, but the CPSU claimed Australia Post had flubbed other decisions.

“Our members having been working harder and longer to help the community in the pandemic, all while taking a pay freeze, and how are they rewarded? Not with a watch or a bonus, I can tell you that,” said the union’s deputy national president, Brooke Muscat.

“But it’s not surprising given the other shocking decisions coming out of Australia Post’s leadership this year,” said national secretary Greg Rayner.

“Australia Post needs a whole reshuffle to get its leadership team right. The Board must step aside too.”

Ms Holgate could not specify what type of wristwatch the senior staff had been gifted, saying “I don’t recall” and that she didn’t purchase them personally.

But despite the lavish price tag, the cost of “around $3000” would likely make them among the cheapest such watches available from the brand.

Cartier’s Australian website lists dozens of watches, up to an eye-watering $438,000, but none in the ballpark of $3000.

The closest is the ‘Tank solo’, a steel and leather model priced at a relatively modest $3750.

Labor Senator Kimberley Kitching specifically asked whether the gifts were Tank models, which Ms Holgate was unable to answer.

Ms Holgate herself was reportedly wearing to the estimates hearing a Bulgari watch which can retail for up to $48,000.