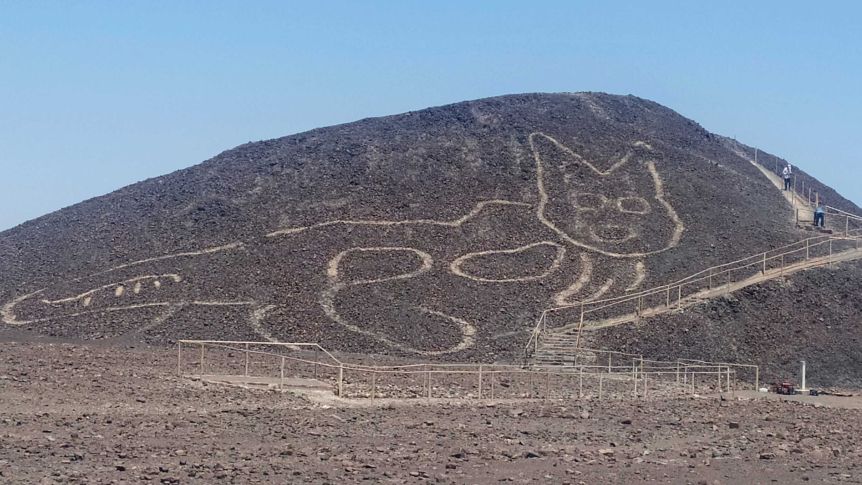 The use of drones has allowed archaeologists to continue to find geoglyphs at the Nazca Lines site. Photo: Peru Ministry of Culture

Archaeologists from the Peruvian Ministry of Culture have announced the discovery of a 37-metre-long glyph of a feline in the Nazca Lines.

The Nazca Lines are a group of large drawings, known as geoglyphs, etched into the desert sands of southern Peru, around 400 kilometres from the capital Lima.

“One of the things that continues to surprise, and that many ask, is how we still find new geoglyphs,” said Johny Isla, the director of the Nazca Lines conservation mission at the Ministry of Culture, as quoted by euronews.

“In fact, there are new ones and we will continue to find more,” he said.

The geoglyphs are dispersed over an area spanning almost 1000 square kilometres depicting people, animals and other figures, and were recognised as a UNESCO World Heritage Site in 1994.

While first discovered around a century ago, scientists and archaeologists have found geoglyphs with increasing frequency in recent years with the help of drones.

“This has improved a lot in recent years with the use of modern technology,” Mr Isla said.

“Before we had aerial photographs or photographs from planes, but now we have photos that can be taken with drones at very low altitudes and that helps us a lot.”

“There is still much work needed to be done in surveying the distribution of these geoglyphs,” said a statement from the university at the time.

“In addition, the expansion of urban areas has brought damage to the lines, drawing attention to the protection of the Nazca Lines as a social issue.”

The environmental activist group Greenpeace sparked anger in 2014 when it staged a protest near the Nazca Lines’ famous hummingbird, for which it later apologised.

Peru was last week certified by the World Travel & Tourism Council under its Safe Travels initiative, which aims to see tourism recover in adherence to protocols to avoid the spread of COVID-19.

“We have had a quite restrictive quarantine and we are now opening activities to bring back tourism.”

Earlier this year, tourists were arrested after faeces was found at Machu Picchu, with one man charged with “destroying Peru’s cultural heritage”.