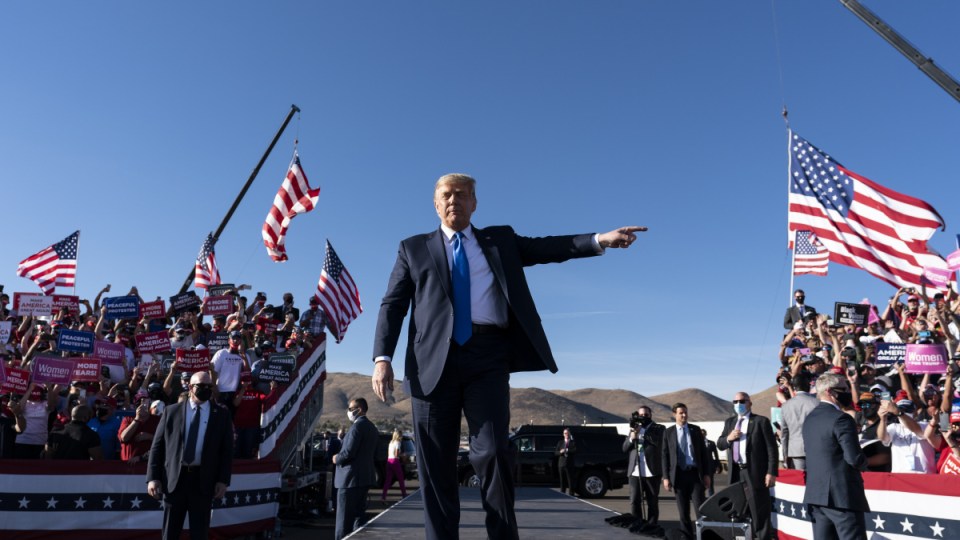 US President Donald Trump and Democratic challenger Joe Biden are courting early voters in the competitive states of Nevada and North Carolina, as the final presidential debate looms later this week.

Some 27.7 million Americans have already cast ballots either by mail or in person ahead of the November 3 election, according to the US Elections Project at the University of Florida.

The record-shattering figure is being driven in part by concerns about crowds at polling sites on Election Day amid the coronavirus pandemic.

In North Carolina, a battleground where 1.4 million or 20 per cent of the state’s registered voters had already voted by Sunday morning, Mr Biden urged residents to cast ballots as soon as possible.

“We gotta keep the incredible momentum going; we can’t let up,” he said at a “drive-in rally” in Durham, as attendees sitting in cars honked in approval.

Mr Biden also criticised Mr Trump for saying at the weekend the US had “turned the corner” in the coronavirus pandemic, noting the rate of new cases across the country has risen to the highest level in months.

“As my grandfather would say, ‘This guy’s gone around the bend if he thinks we’ve turned the corner,'” Mr Biden said.

“Things are getting worse and he continues to lie to us about circumstances.”

Mr Biden’s pick for vice president, Senator Kamala Harris, cancelled in-person events over the weekend as a precaution after an aide tested positive for COVID-19.

She will return to the campaign trail on Monday local time with a visit to Florida to mark that state’s first day of early in-person voting.

Senator Harris tested negative for the virus on Sunday.

Mr Trump spent his Sunday in Nevada, a state he hopes to wrest away from Democrats after narrowly losing it in 2016. Early in-person voting there began on Saturday.

The President, who rarely goes to church but has remained popular among evangelical Christians for his opposition to abortion and for appointing conservative judges, began his day at a service at the International Church of Las Vegas.

Mr Trump, who recently had with his own bout of COVID-19, did not wear a mask for the indoor service.

One of the church’s pastors, Denise Goulet, said to Mr Trump from the stage God had told her he would win the election. Mr Trump put a handful of $20 bills into an offering bucket and bowed his head during a prayer.

Mr Trump will campaign every day leading up to Thursday’s debate in Florida, including stops in Arizona and North Carolina, campaign spokesman Tim Murtaugh said.

While Trump lags in national opinion polls and in many battleground states, Biden campaign manager Jen O’Malley Dillon said the figures were misleading because must-win states are close.

US presidential elections are determined by electoral votes, allotted to US states and territories based largely on their populations, rather than by a tally of the popular vote.