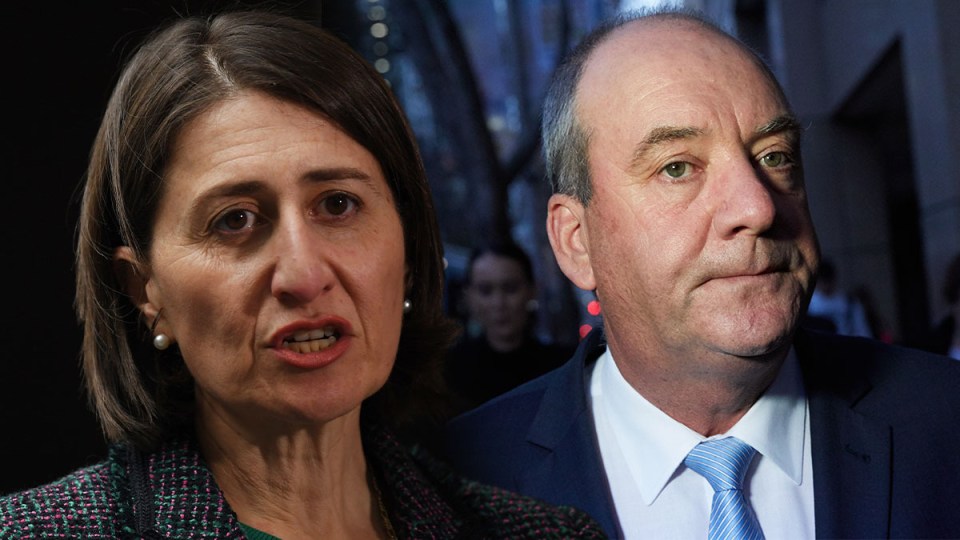 Daryl Maguire says he and Gladys Berejiklian contemplated marriage and discussed having a child. Photo: TND

NSW Premier Gladys Berejiklian has been accused of “playing the victim card” after refusing to resign despite admitting to a secret, five-year relationship with a disgraced former minister at the heart of a corruption investigation.

Ms Berejiklian maintained she had not “done anything wrong”, when she faced a media conference on Monday, at the end of a gruelling day before the Independent Commission Against Corruption.

But the state opposition has accused her of “turning a blind eye to corruption” and has demanded her resignation.

In a stunning day in NSW politics, Ms Berejiklian claimed she had given no special favours to former state member for Wagga Wagga and fellow Liberal MP Daryl Maguire, after admitting they had what she called a “close personal relationship” from 2015-2020.

The relationship lasted two years beyond when she sacked him from the Liberal Party over a separate corruption matter.

After a damning day at the Independent Commission Against Corruption, the Premier thanked public servants who “made sure that this person did not get any personal benefit”.

ICAC has accused Mr Maguire of using his public office and parliamentary resources to improperly gain a benefit for himself or for G8way International – a company he is alleged to have “effectively controlled”.

Mr Maguire was forced to quit Ms Berejiklian’s government in 2018 after a separate ICAC inquiry heard he sought payments to help broker deals for property developers.

But the Premier revealed the pair had a years-long relationship, which she said she kept under wraps even from friends and family, until earlier in 2020.

“Had I known then what I know now, clearly I would not have made those personal decisions that I did,” Ms Berejiklian said, claiming she was not aware of the full extent of the allegations against Mr Maguire even after his 2018 resignation.

“I feel really, really let down.”

“Never, ever have I done anything but what is the highest standard of integrity. Where I have failed is in my personal life.”

The famously private Ms Berejiklian said the issue had been intensely embarrassing, claiming it was a “personal nightmare”.

She declined to detail the exact nature of her “close personal relationship” with Mr Maguire, but said she did not tell anyone about him as she was unsure of the relationship’s future.

“It didn’t have sufficient status for me to share with anybody,” she said of the five-year relationship.

Disappointing that Gladys Berejiklian has played the victim card. This isn’t about a relationship it is about integrity and turning a blind eye to corruption.

“How on earth did she think it was OK to still be in contact with the disgraced MP and still be in a relationship with him?” the Labor leader said.

However, despite the calls to resign, Ms Berejiklian appears to  enjoy the support of senior colleagues.

She appeared at her press conference alongside Treasurer Dominic Perrottet – seen as a potential future party leader – and Health Minister Brad Hazzard, both of whom praised her “integrity” and “honesty”.

Earlier, Transport Minister Andrew Constance said Ms Berejiklian had “worked her socks off for this state, and deserves enormous regard and respect”.

Labor is likely to move a motion of no confidence in the Premier when state Parliament sits on Tuesday.

Several other similar motions moved by Labor, including against Mr Perrottet and Deputy Premier John Barilaro, have failed in recent weeks.

The ICAC hearing heard secretly taped phone calls between Mr Maguire and Ms Berejiklian, in which he talked about business and property deals.

In one recording, Ms Berejiklian was heard saying, “I don’t need to know about that” as he detailed financial plans.

She insisted she had little knowledge of Mr Maguire’s interests, labelling him a “big talker” who came up with “pie in the sky” schemes.

“A lot of the time I would have ignored or disregarded what he said as fanciful … I didn’t care to be involved,” the Premier said.

Later, she said she cut him off in those conversations because she wasn’t interested in hearing about his plans, but assumed he was undertaking legitimate business.

“I didn’t care too much about his interests,” she claimed.

“When you’ve known someone for a long time and you put your trust in them, you assume they’re doing the right thing. And that’s what I assumed.

“I assumed he was doing the right thing. I had my trust in him, and obviously I know now that that trust was misplaced, and I accept that human failing on my part.”

Berejiklian refuses to resign over ‘nightmare’ relationship with disgraced ex-MP