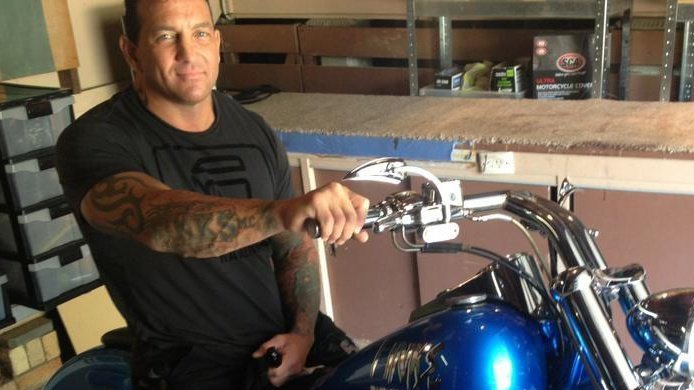 Queensland police are investigating the fatal shooting of a high-profile member of the Mongols outlaw motorcycle gang on the northern Gold Coast early on Monday morning.

The ABC understands the victim is Shane Bowden, 48, who was charged after allegedly breaching Queensland border restrictions when he arrived from Melbourne last month.

He had arrived in the state with a gunshot wound to his leg after surviving a reported drive-by shooting in Melbourne in July.

Police said Mr Bowden had arrived home from the gym around midnight when he ambushed in his driveway by at least two other men at a unit complex on Cox Road at Pimpama.

“He’s basically driven into his driveway, hasn’t even got out of his car and he’s been executed,” the South Eastern Police Regional Crime Coordinator, Detective Superintendent Brendan Smith, said.

“There’s been two burnt-out cars located tonight, one at Beenleigh, one at Ormeau and we’re certainly looking at the connections between those two vehicles and the murder of this gentleman,” he said.

He said the two cars, a Commodore and a Falcon, have been seized by police and investigators are trying to identify the two men at the scene, one in dark clothing, one in light.

Mr Bowden’s partner and two children were home at the time.

Detective Superintendent Smith said the victim was a high-profile member of the Mongol bikie gang and is believed to have been killed by other members of the same gang.

“It’s a matter that would appear to be within the one club I would suggest as opposed to one club against another,” he said.

“It obviously makes things harder when these types of gangs are involved because they have their own code of silence.

“It’s important that people understand that these gangs are criminals … that survive on retribution, violence and threats and if anyone thinks anything otherwise they’re an idiot.”

He said it was too early to tell if there will be any retaliation from this attack.

He said there was no danger to the public.