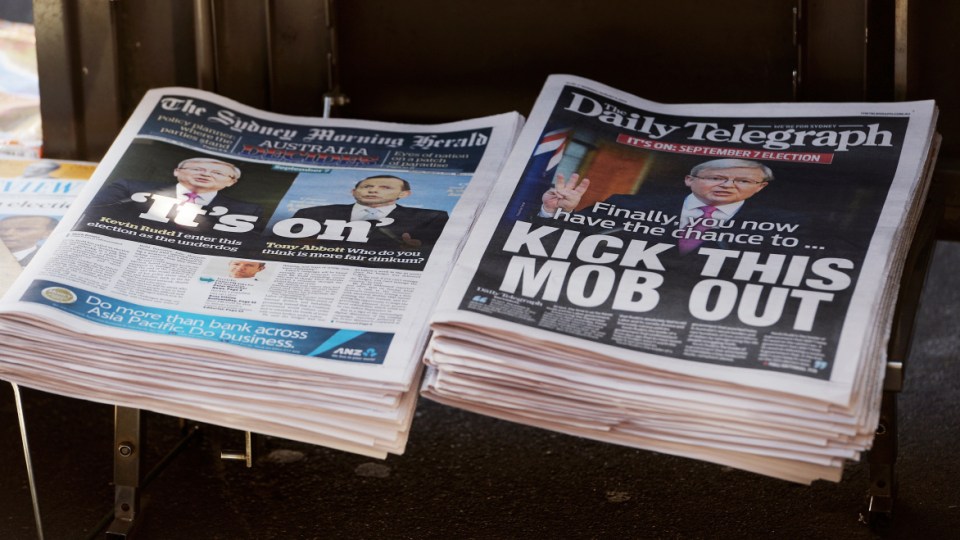 News Corp's Daily Telegraph and the then Fairfax Sydney Morning Herald on the morning campaigning began in the 2013 federal election. Photo: Getty

More than 100,000 people have backed Kevin Rudd’s call for a royal commission into News Corp, but it seems his former colleagues are not among the masses.

The Parliament House website was unable to cope with the support for the former Labor PM’s petition, as traffic spiked 500 per cent on the back of his call.

Thank you Australians for supporting #MurdochRoyalCommission! And thank you all for persevering despite the Parliament House technology failures. They’ve said their system hasn’t been able to cope with the sheer volume of the public response.

Mr Rudd set social media alight at the weekend when he called for an formal investigation into media ownership in Australia, specifically targeting Rupert Murdoch’s News Corp. He called the company – which owns Sky News, the Daily Telegraph, Herald Sun and The Australian newspapers, and multiple radio stations – a “cancer on democracy”.

“I’m calling on the parliament to establish a royal commission into the abuse of media monopoly in Australia, and particularly by the Murdoch media, to make recommendations to maximise media diversity ownership for the future lifeblood of our democratic system,” Mr Rudd said.

He shared a link to a petition on the Australian Parliament House website. From Saturday morning, when he posted it, until Monday afternoon, the petition had been signed more than 100,000 times.

Australians have watched with growing anger at what the Murdoch media monopoly is doing to our country. A cancer on democracy.

Today I am launching a national petition to establish a #MurdochRoyalCommission.

If you value our democracy, please sign here: https://t.co/FjfK7ij7YQ pic.twitter.com/gIGfmMF49W

Traffic to its page was so great that multiple supporters claimed they were continually unable to access the website, with ‘error’ messages returned.

“More people visited our website yesterday alone than they did across the entire last sitting week,” the account tweeted on Monday.

First up, if you’re having trouble signing the e-petition, at the moment we’d suggest you try again later. The closing date for Mr Rudd’s petition is 4 November, so you do have some time. pic.twitter.com/Rxhwi1ulDH

It blamed the website issues on the petition platform’s safeguards “to prevent bots from padding the total number of signatures on an e-petition”.

Mr Rudd tweeted on Saturday afternoon that “so many thousands have tried to sign that it’s apparently triggered the parliament’s cyber defences.”

On Monday, Mr Rudd told the ABC that he was upset about how much media News Corp’s owned, saying “it’s gone too far”.

Asked on ABC TV on Monday about advances made to Mr Murdoch when he was Labor leader, Mr Rudd said “I make no apology for that, mate”.

“Murdoch media, over the last decade, has become little more than a protection racket for the Liberal and National parties.”

"The Australian people are fed up with the nonsense we are being served up each day, in particular by the Murdoch media." pic.twitter.com/a29IYW3rRt

Mr Rudd claimed politicians and journalists “fear the Murdoch empire”, hinting that he didn’t expect many in public life to support his call.

It appears his analysis was correct.

Despite the public support, Mr Rudd has not received the backing of his former colleagues in federal parliament. Current Labor leader Anthony Albanese politely rebuffed a question about whether his party would back the royal commission call.

“Kevin is doing that as, as a private citizen, a former prime minister, he’s entitled to put his views. I get to announce Labor Party policy.”

“I always welcome my conversation with Kevin, and I welcome the fact that he is passionate about having a diverse media landscape here in Australia,” he said.

Mr Jones said, on a related note, that he would back a campaign from smaller local media outlets calling for governments to better support regional media.

“They’ve been doing it tough over the past couple of years, particularly tough during the pandemic. I am 100 per cent backing their petition and their campaign to boost media because I think places like Canberra need to hear more about the stories from regional Australia than just the capital cities,” he said.