The virus that causes COVID-19 can linger on everyday surfaces for up to four weeks, new research by Australia’s national science agency has revealed.

At 20 degrees Celsius, which is about room temperature, SARS-CoV-2 can survive for at least 28 days on stainless steel, vinyl, plastic banknotes and glass – such as that found on mobile phone screens – the CSIRO found.

The Australian scientists found the lower the temperature, the longer the virus can survive on surfaces.

SARS-CoV-2 tended to survive longer on non-porous or smooth surfaces rather than porous surfaces such as cotton.

It also survived longer on paper banknotes than on plastic banknotes, according to the research which was published in Virology Journal.

And the virus lasted 10 days longer than influenza on some surfaces. 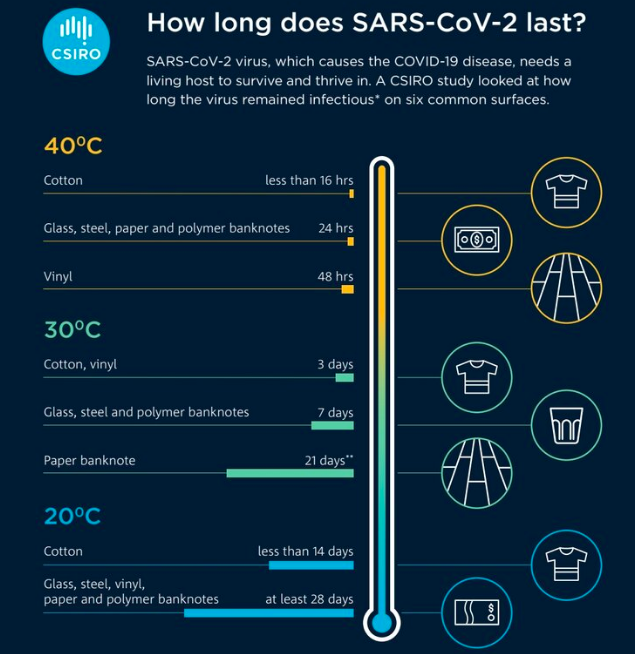 Dr Larry Marshall, Chief Executive of CSIRO, said establishing how long the virus survived on surfaces enabled scientists to more accurately predict and prevent its spread, and so protect the community from infection.

“Together, we hope this suite of solutions from science will break down the barriers between us, and shift focus to dealing with specific virus hotspots so we can get the economy back on track,” Dr Marshall said.

“At 20 degrees Celsius, which is about room temperature, we found that the virus was extremely robust, surviving for 28 days on smooth surfaces such as glass found on mobile phone screens.”

Similar experiments for Influenza A found it survived on surfaces for 17 days.

The research involved drying the virus in an artificial mucus on different surfaces, at concentrations similar to those reported in samples from infected patients and then re-isolating the virus over a month.

Further experiments were carried out at 30 and 40 degrees Celsius, with survival times for the SARS-CoV-2 virus decreasing as the temperature increased.

“While the precise role of surface transmission, the degree of surface contact and the amount of virus required for infection is yet to be determined, establishing how long this virus remains viable on surfaces is critical for developing risk mitigation strategies in high contact areas,” Dr Eagles said.

ACDP Director, Professor Trevor Drew, said the research may help explain the apparent persistence and spread of SARS-CoV-2 in cool environments such as meat processing facilities and how that might be better addressed.

The research was undertaken at the Australian Centre for Disease Preparedness (ACDP) in Geelong.