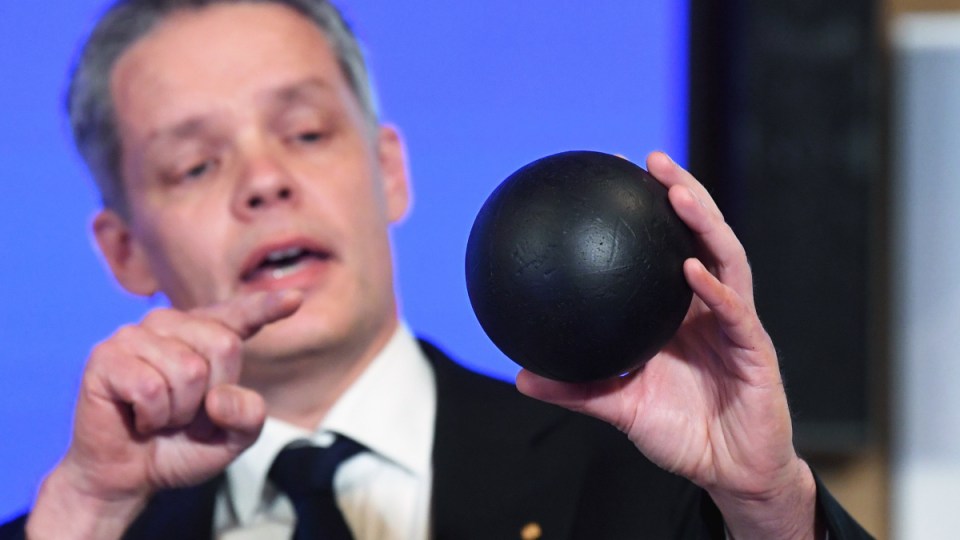 Ulf Danielsson, member of the Royal Swedish Academy of Sciences, announces the Nobel Prize in Physics in Stockholm. Photo: EPA

Three scientists have won this year’s Nobel Prize in physics for advancing our understanding of black holes.

The Royal Swedish Academy of Sciences said on Tuesday that Briton Roger Penrose will receive half of this year’s prize “for the discovery that black hole formation is a robust prediction of the general theory of relativity”.

Goran K. Hansson, the academy’s secretary-general, said German Reinhard Genzel and American Andrea Ghez will receive the second half of the prize “for the discovery of a supermassive compact object at the centre of our galaxy”.

The prizes celebrate “one of the most exotic objects in the universe”, black holes, which have become a staple of science fiction and science fact and where time even seems to stand still, Nobel committee scientists said.

BREAKING NEWS:
The Royal Swedish Academy of Sciences has decided to award the 2020 #NobelPrize in Physics with one half to Roger Penrose and the other half jointly to Reinhard Genzel and Andrea Ghez. pic.twitter.com/MipWwFtMjz

Penrose proved with mathematics that the formation of black holes was possible, based heavily on Albert Einstein’s general theory of relativity.

Genzel and Ghez looked at the dust-covered centre of our Milky Way galaxy where something strange was going on, several stars moving around something they couldn’t see.

It was a black hole. Not just an ordinary black hole, but a supermassive black hole, four million times the mass of our Sun.

Now scientists know that all galaxies have supermassive black holes.

It is common for several scientists who worked in related fields to share the prize.

Last year’s prize went to Canadian-born cosmologist James Peebles for theoretical work about the early moments after the Big Bang, and Swiss astronomers Michel Mayor and Didier Queloz for discovering a planet outside our solar system.

The prestigious award comes with a gold medal and prize money of 10 million Swedish kronor ($1.5 million), courtesy of a bequest left 124 years ago by the prize’s creator, Swedish inventor Alfred Nobel.

The amount was increased recently to adjust for inflation.

On Monday, the Nobel Committee awarded the prize for physiology and medicine to Americans Harvey J. Alter and Charles M. Rice and British-born scientist Michael Houghton for discovering the liver-ravaging hepatitis C virus.

“It is a success story for team science.”

In our interview with new laureate Charles Rice – recorded just after he had heard the news about his #NobelPrize – he celebrates the collaborative nature of the decades-long scientific effort that led to the discovery of Hepatitis C. pic.twitter.com/OEPlJyS4Bn

The other prizes, to be announced in the coming days, are for outstanding work in the fields of chemistry, literature, peace and economics.