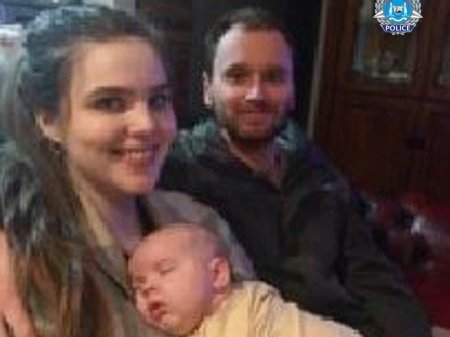 Coree Stewart, Patricia Taylor and baby Isaac have not been seen for about two weeks. Photo: ABC/ WA Police

Western Australian police are urgently seeking the public’s assistance for information about a missing Perth couple and their 16-week-old baby who have not been seen for two weeks.

Coree Stewart, 26, his 28-year-old partner Patricia Taylor, and 16-week-old baby Isaac, were last seen about two weeks ago in Balcatta in Perth’s north.

It is not known what they were last seen wearing.

Mr Stewart is described as being 179 centimetres tall with a slim to medium build, short brown hair and hazel eyes.

Ms Taylor is approximately 165 centimetres tall with a slim to medium build and long brown hair.

There are concerns for the family’s welfare.

Silence completely out of character for couple

Mr Stewart’s mother Michelle Smith said she had been feeling unwell and was isolating away from her family.

Ms Smith told ABC Radio Perth that when she was finally allowed to visit her son he was not at home, and he did not respond to a letter she left on his door.

“When we’ve done the research back now, no one has actually physically seen Coree now for I think about 10 days,”

Ms Smith said it was “completely out of character” that she had not heard from her son.

“Patricia and Coree are active community members with their local church, usually speaking to their family,” she said.

“They have recently just had – like a lot of people – transitional housing during the pandemic.

“They didn’t find a house until three days before the baby was born and had quite a traumatic birth.

“This is highly unusual behaviour for them not to let us know where they are.

Car in driveway and phones turned off, mother says

Ms Smith said the family had left no evidence of their movements as she made an emotional plea on radio for her son to make contact.

“This is what’s bizarre, the car is in the driveway, we don’t know what they’re wearing, their phones are off, they’re not on Facebook – their accounts have been closed,” she said.

“Coree and Patricia were feeling quite overwhelmed trying to manage to see everyone … so we thought they might have gone away on a bit of a holiday.

“Patricia and Coree … we love you, and if you can hear us please tell us that you’re OK.

“It’s OK and it’s normal to be overwhelmed but just come home.”

Police have urged anyone with information, or who sees Mr Stewart, Ms Taylor or their child Isaac, to contact police immediately on 131 444.