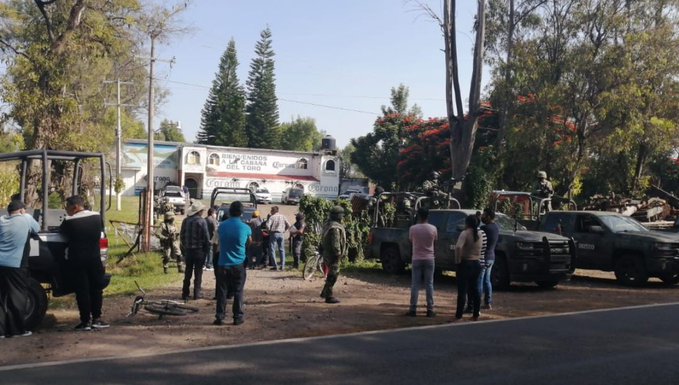 Gunmen have killed 11 people, including four women, in a bar in the central Mexico state of Guanajuato.

State prosecutors say the bullet-ridden bodies were found at a bar near the town of Jaral del Progreso on Sunday.

The area is near the border with Michoacan state, which has been a point of incursion for the Jalisco cartel, which wants to move into Guanajuato.

Local media reported the four dead women may have been employed as dancers at the bar, located on the side of a highway.

There was no immediate information on a possible motive in the attack but it bore the signs of a drug gang killing.

Guanajuato has been the most violent state in Mexico in recent years but authorities had hoped the detention of a leader of a local gang on August 2 would help stem the violence.

The detained leader of the Santa Rosa de Lima gang, Jose Antonio Yepez Ortiz, was better known by his nickname El Marro, which means “The Sledgehammer”.

He had long fought a bloody turf battle with the Jalisco cartel and authorities blamed him for much of the violence in the industrial and farming state.

While murders across the state dropped slightly to 339 in August from 403 in July, they may be rebounding in September as gang members fight to fill the vacuum left by Yepez Ortiz’s detention.