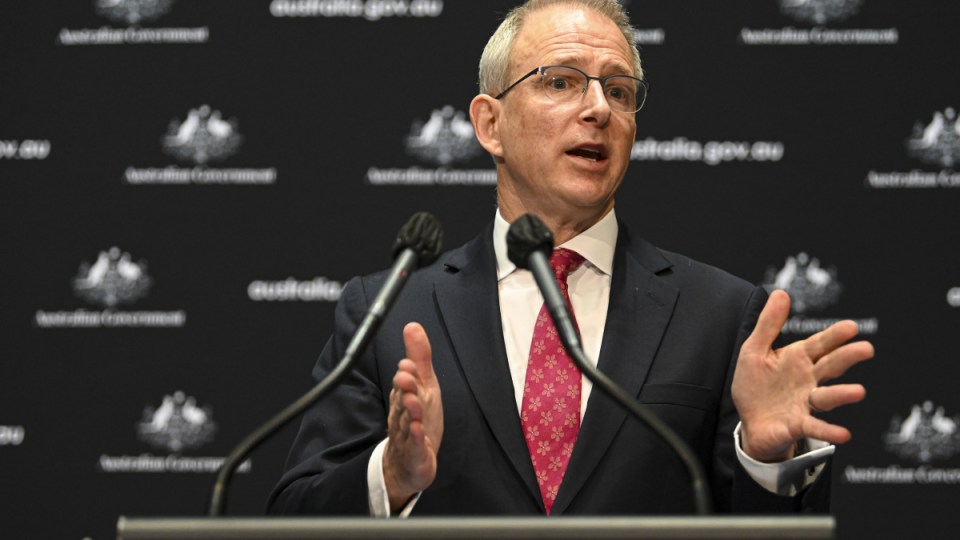 Paul Fletcher says he only learned of the inflated payment when reading the ANAO report. Photo: AAP

Federal minister Paul Fletcher claimed his own infrastructure department left him in the dark on a deal to buy land at Leppington for the Western Sydney airport, after paying 10 times its “fair value” cost.

Mr Fletcher, who was urban infrastructure minister at the time of the 2018 deal – deemed “significant and unusual” by the auditor-general – said he was made aware of the vastly inflated price paid only when the Australian National Audit Office released its scathing report this week.

“My knowledge is the same as yours,” he said at a media conference on Wednesday.

“The auditor-general report said information was concealed from senior officials at the department, as well as the minister.”

The ANAO’s report into the purchase of the so-called ‘Leppington Triangle’ – a 12-hectare slice of land at the end of a proposed additional runway for the Western Sydney Airport – raised “ethical concerns” about the conduct of infrastructure department officials. The ANAO claimed infrastructure department officials had not properly briefed decision makers, alleging “this approach was misleading”.

The land, bought for $30 million but later valued at only $3 million, was purchased from the Leppington Pastoral Company. It is the dairy company of billionaire brothers Tony and Ron Perich and has previously donated large sums to the Liberal Party.

An LPC spokesperson did not respond to The New Daily‘s request for comment on Tuesday.

“Briefings lacked balance in that, while they presented confirming evidence as to the reasonableness of the proposed land price, they omitted evidence that the price was too high including reference to other valuations of the land,” the ANAO report claimed.

“Overall, the lack of transparency evident in briefings concerning the basis for valuations and the price being paid was inconsistent with an ethical approach to public administration.”

The Labor opposition is referring to the incident as ‘airport rorts’.

Current Urban Infrastructure Minister Alan Tudge, who came to the portfolio a month after the Leppington deal was formalised, claimed there was “no question of ministerial involvement”.

“It goes to the administrative actions of the department, more than two years ago,” he told TND on Monday.

On Wednesday, Mr Fletcher – now Communications Minister – gave a press conference on the government’s upgrades to the national broadband network. Asked by TND when he became aware of the $30 million Leppington deal, he claimed it was only in recent days.

“The auditor-general’s report … makes it very clear the valuation methodology was not disclosed even to senior officials at the department, let alone the minister,” Mr Fletcher said.

In a speech at the National Press Club later on Wednesday, Mr Fletcher said he had “absolutely learned things that I did not know before” after reading the report.

“The decision was made by the deputy secretary of the department, not the minister of the day,” he said.

Labor’s infrastructure spokeswoman, Catherine King, cast doubt on Mr Fletcher’s position that he was not across the issue.

“There is no way a $30 million land acquisition, certainly one as sensitive as this, would not have had a briefing to the minister at some point,” she said on 2SM Radio on Wednesday.

“If you didn’t ask the basic questions about it, then frankly, you have to ask whether you’re competent to be a minister.”

But asked if he was concerned about the land purchase and actions leading up to it, Mr Fletcher said: “yes I am”.

“I think the auditor-general is right, it does raise issues,” he said.

Mr Fletcher demurred on whether he thought there might have been similar chains of events in other infrastructure department purchases.

“I’m not in a position to say anything more beyond what I’ve said as to what the auditor-general’s report said,” Mr Fletcher replied when asked if he thought it was an isolated case.

Nor was he able to say if there was a threshold before large purchases made by the department must be escalated to ministerial level.

“It’s a prudent question that would be necessary to put to the department,” Mr Fletcher said.

TND has put that question to the infrastructure department, as well as other questions about whether it had identified other similar instances.

In a prior statement tendered to the ANAO, and included in the report, the infrastructure department said it “agrees with the recommendations” and was “concerned by the findings of the report”.

Mr Fletcher said he welcomed the department’s commitment to the report’s recommendations.

Minister says airport land deal ‘concealed’ by his own department