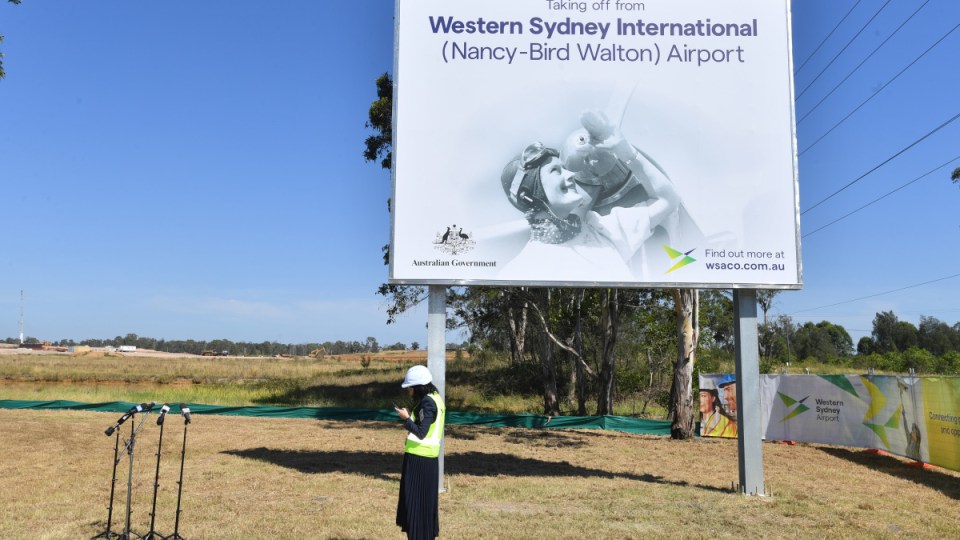 Taxpayers bought land near Western Sydney Airport for 10 times what it was worth, according to ANAO. Photo: Getty

Federal officials have been slammed for providing “inadequate and unreliable” advice that saw taxpayers buy land near Western Sydney Airport for 10 times what it was worth.

The federal infrastructure department is investigating the conduct of its staff after the Australian National Audit Office released a blistering report on the purchase of a 12-hectare slice of land referred to as ‘the Leppington Triangle’.

The report claimed officials’ conduct “fell short of ethical standards” and was “not appropriate”, with taxpayers shelling out almost $30 million for land valued at $3.065 million less than a year later.

The ANAO accused the department of not properly briefing decision makers on the project, claiming staff “omitted relevant information” that led to the land’s value being vastly inflated.

“The incomplete advice provided to decision makers, and the inadequate response by the department when questions were raised by the ANAO, was inconsistent with effective and ethical stewardship of public resources,” the scathing report claimed.

At the heart of the matter is the ‘Leppington Triangle’, at Bringelly, NSW.

Sitting on the edge of the proposed Western Sydney International Airport, the parcel of land is at the end of where a potential second runway will be built, but the ANAO says the land is not needed until 2050.

The small allotment was not included in the original 1989 purchase of land for the airport, with the ANAO reporting the federal government had been locked in a 10-year dispute with the land owner before agreeing to excise the triangle from the purchased land.

However, in 2016, the department resumed negotiations for the triangle.

The ANAO said that was “to capitalise on goodwill the department considered had been created by concessions made to the landowner” over a nearby road.

However, multiple other valuations put the land’s true value as a fraction of that, and the ANAO questioned why the department wanted to buy the land decades before it would be needed.

“The Department of Infrastructure’s 2018-19 financial statements valued the Leppington Triangle land at $3,065,000 – a tenth of the price it had paid 11 months earlier,” the ANAO report said.

Various other valuations included in the report put the land’s value at between $920,000 and $6.13 million.

The ANAO noted the final amount represented $2.43 million per hectare. Strikingly, the ANAO noted the NSW state government had also purchased a 1.63-hectare slice of the Leppington Triangle in 2016 for only $109,000.

“The result was that the department paid 22 times more per hectare than was paid by the NSW government for its portion of the Leppington Triangle,” the ANAO said.

Furthermore, the report raises doubt over the alleged “goodwill” that formed part of the basis for the federal government’s decision to re-enter negotiations for the land, claiming this view was “incompatible” with other evidence that the seller was “unwilling” to budge.

Overall, the ANAO claimed infrastructure department officials had not properly briefed decision makers in the process.

“Briefings lacked balance in that, while they presented confirming evidence as to the reasonableness of the proposed land price, they omitted evidence that the price was too high including reference to other valuations of the land,” the report claimed.

“This approach was misleading and did not support informed decision making.

“Overall, the lack of transparency evident in briefings concerning the basis for valuations and the price being paid was inconsistent with an ethical approach to public administration.

“It was not made evident that the department intended to pay a per hectare rate some 20 times higher than that proposed by the NSW government for its portion of the Leppington Triangle.”

In a statement tendered to the ANAO, the federal infrastructure department said it “agrees with the recommendations” and was “concerned by the findings of the report”.

Department secretary Simon Atkinson said an independent review had been launched, as had management reviews of staff involved.

“The department agrees that the valuation strategy was unorthodox. However, we note that the strategy was developed in consultation with the Department of Finance and the Australian Government Solicitor and was designed to mitigate the risk of costly and lengthy legal challenges,” he wrote.

“It is not good enough to brush this off as a simple departmental mistake. Ministers must bear ultimate responsibility for this decision,” she told The New Daily.

The seller of the land was the Leppington Pastoral Company.

Ms King noted an entity of the same name had donated nearly $59,000 to the Liberal Party of Australia in 2018 and 2019, according to Australian Electoral Commission donor returns.

“The Deputy Prime Minister and Minister Tudge need to urgently front up and explain what went wrong, what they knew about it, and what they are doing to fix it,” she said.

“We need to know who knew about the purchase, why the department was so prepared to pay above market value, and who signed off on the final purchase.”

A spokesperson for Mr Tudge noted the department had agreed to all the report’s recommendations.

“It is also investigating matters of staff conduct identified by the ANAO,” he told The New Daily.

“There is no question of ministerial involvement. It goes to the administrative actions of the department, more than two years ago.”