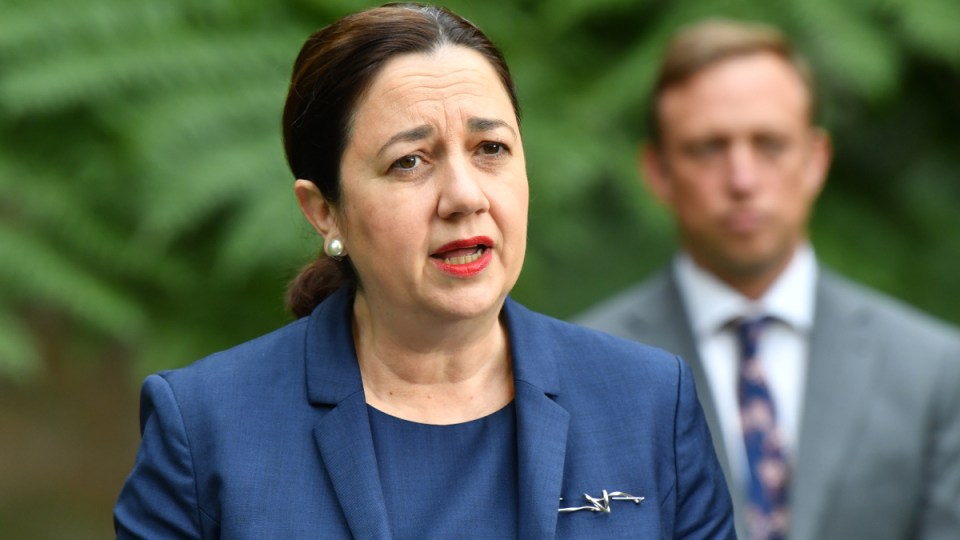 Critics of Annastacia Palaszczuk’s besieged border policies have been told to “back off” by the nation’s peak medical body, as the Queensland deputy premier laughed off a campaign from Qantas by accusing the airline of “gouging” prices.

As the number of new COVID cases continues to subside in Victoria, Queensland is at the centre of the nation’s newest state-versus-federal stoush.

At the eye of this storm is Premier Annastacia Palaszczuk’s decision to keep state borders shut to New South Wales and the Australian Capital Territory, despite single-digit daily case numbers in the former and 10 weeks without a new diagnosis in the latter.

Last week’s heartbreaking case of Canberra woman Sarah Caisip, who tried to visit her dying father but was forced into quarantine in Brisbane, her request for an exemption denied even after he died – was the catalyst for Prime Minister Scott Morrison to dive headfirst into the border battle.

Despite Ms Caisip eventually being given a special pass to have a private farewell with her dad, the PM’s calls for broader relaxations of Queensland’s hardline quarantine policies fell on deaf ears.

Ms Palaszczuk reiterated she would not change tack, and that exemptions were granted only by state chief health officer Dr Jeanette Young on medical grounds.

The Premier and Dr Young have come under fire over other related funeral cases in recent days, with intense criticism from some media organisations and ferocious attacks on social media.

On Sunday, a plane flew over Brisbane trailing a banner with the words “She is heartless”.

Dr Perry, president of the Queensland arm of the AMA, Australia’s peak medical body, said Dr Young was under barrage from “online trolls”.

“We’re an evidence-based organisation and we follow what the chief health officer says,” he told reporters on Sunday.

In response to criticisms of her decisions, such as classifying the ACT as a coronavirus hotspot, Dr Perry told detractors to “back off”.

“Leave her alone. We think this chief health officer is doing a great job,” he said.

Ms Palaszczuk pointedly tweeted a clip of the exchange, in a sign she was sticking by her CHO.

Deputy Premier Steven Miles appeared bemused at the airlines taking potshots at the government while embroiled in their controversy.

Thousands of Australians are stranded overseas and unable to get home, as airlines run small numbers of flights because of airport arrivals caps.

“If the boss of Qantas wanted to do more and show compassion for Australians, then he wouldn’t be gouging them tens of thousands of dollars just to come home,” Mr Miles said.

The federal government has been under pressure to lift airport caps, with only a few thousand people allowed through the nation’s borders each week – the majority through Sydney.

Home Affairs Minister Peter Dutton, speaking on the ABC’s Insiders program on Sunday, said the caps could only be lifted if state governments did more to cater for those coming back.

“I would be happy to double the number of people tomorrow if Queensland Health was to relax the quarantine period of 14 days if that’s what the health advice was,” Mr Dutton said.

“If not, they need to increase the number of hotel rooms in Australia.”

.@PeterDutton_MP says ABF approved Tom Hanks to enter the country "based on the letter of support from Queensland Health and on the fact that the Queensland Government had, as I understand it, provided financial incentive for the movie to be shot in Queensland." #insiders #auspol pic.twitter.com/HQs2p4CozD

In relation to the case of Hollywood actor Tom Hanks, who returned to Australia this week to continue filming a movie in the Sunshine State, Mr Dutton said his federal Border Force had only approved his entry after a recommendation from the state government.

Mr Dutton said the state government had said the filming of the movie would create jobs, and had asked the federal government to approve the entry of Mr Hanks and other crew involved in the production. They are quarantining in a hotel paid for by the movie studio.

The federal Labor Party has called for the government to lift the arrivals caps, and make use of other airports and quarantine facilities nationwide – not just in major cities.

I join @KKeneally calling on @ScottMorrisonMP and @PeterDutton_MP to work with National Cabinet to lift the cap on international arrivals.
So many Territorians & other Aussies are stranded overseas & we have people ready to charter flights with quarantine here in the NT #auspol pic.twitter.com/ipUEANABBP

“It is within the wit of the commonwealth government to figure out how to get these 25,000 stranded Australians home,” shadow home affairs minister Kristina Keneally said.

“We have 13 airports in Australia that can take international passengers. Why aren’t we using any of them?”

She cited Canberra, Darwin and the Gold Coast as possible sites.