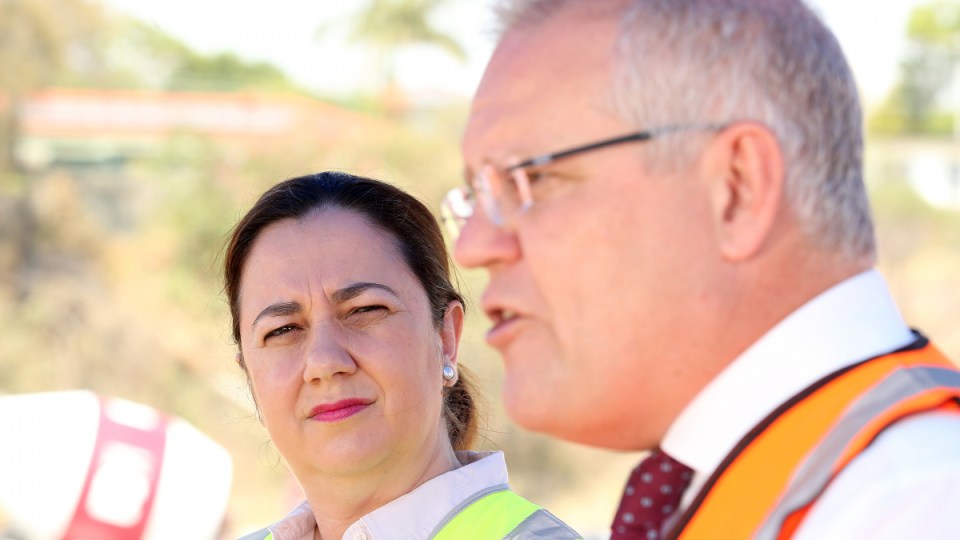 Scott Morrison and Annastacia Palaszczuk are at loggerheads over a funeral. Photo: AAP

Prime Minister Scott Morrison has inserted himself into another border battle with a state premier, with an extraordinary clash opening up over a woman blocked from attending her own father’s funeral.

Queensland Premier Annastacia Palaszczuk has accused the PM of “bullying” and “disgraceful” behaviour, as the federal and state governments come to loggerheads over quarantine and border controls.

“I won’t be bullied nor will I be intimidated by the Prime Minister,” Ms Palaszczuk stormed in a speech to state parliament.

However, the state government has relented and allowed Canberra woman Sarah Caisip a special exemption to farewell her father, but not to attend his actual funeral.

The story of 26-year-old Ms Caisip has encapsulated concerns about Queensland’s strict and controversial border measures in recent days.

Ms Caisip hoped to travel to Brisbane last week to visit her dad Bernard Prendergast, who was dying of terminal cancer, for what was expected to be his final Father’s Day. But she was forced to enter two weeks’ quarantine on arrival in Queensland.

Despite the Australian Capital Territory not having recorded a COVID case in weeks, the Palaszczuk government controversially declared it a hotspot in August, claiming people from Sydney were trying to skirt border restrictions by flying to Queensland from Canberra.

Mr Prendergast died this week, and Ms Caisip’s request for an exemption from quarantine to attend his funeral was denied.

“My dad is dead and you made me fight to see him, but it was too late and now you won’t let me go to his funeral,” she wrote to Ms Palaszczuk.

The case has become a political firestorm in recent days, with Ms Palaszczuk’s opponents calling on her to show compassion and allow Ms Caisip to attend the funeral.

On Thursday, the fight escalated all the way to the Prime Minister’s office, with Ms Palaszczuk revealing in state parliament that she had been personally lobbied by Mr Morrison to provide an exemption.

She railed against the PM’s attempted intervention, criticising his contact.

“I will not be bullied, nor will I be intimidated by the Prime Minister of this country, who contacted me this morning and to whom I made it very clear to the fact that this is not my decision and that I would pass the information on to the chief health officer,” she said.

“I would hope that the Prime Minister would work in a cooperative matter with everyone across this country – and this divisiveness, and these fights, and this intimidation, and this bullying is the worst I’ve ever seen in my lifetime.”

Ms Palaszczuk accused the state Liberal opposition of a “co-ordinated” attack with the PM’s office on her.

“These politics of division are disgusting and disgraceful and the people of Queensland will see through every single one of you and what you are seeking to do, which is to divide,” she said.

“It is absolutely not acceptable for the leader of the opposition to do what she is doing today: a coordinated campaign with the Prime Minister’s office is disgusting and it is demeaning.”

Shortly after, on Sydney’s 2GB radio, Mr Morrison said he had asked the Premier to “overrule the decision”.

“That would allow Sarah to go to the funeral today. It’s not about borders. It’s not about politicians. It’s not about elections. The only thing that matters today is that Sarah can be with her 11-year-old sister Isobel and her mother while they mourn the passing of their husband Bernard,” the PM said.

“Surely, just this once, this can be done… There have been no COVID cases in Canberra for 60 days. I’ve done all I can.”

Mr Morrison and 2GB host, Ray Hadley, both appeared close to tears as they spoke of the case, and also the deaths of their own fathers.

On Thursday afternoon, QLD’s chief health officer Dr Jeanette Young said she regretted such situations, but that she was “risk averse” in terms of granting exemptions.

She said Ms Caisip would be given an exemption for a “private farewell” to her father, where she would be provided with special PPE, but would not be allowed to attend the funeral itself.

“Right at the start of this pandemic, that was one of the hardest things that I had to face, because we know that funerals are very, very high risk, for transmission of the virus,” Dr Young said.

“Although I understand, the enormous toll this is taking on people who are coming here, to Queensland to attend a funeral… they can’t do that until they have been in quarantine for 14 days.”

“Because the last thing I would want to happen, is to have an outbreak at a funeral.”

Addressing the controversial decision to classify the ACT as a virus hotspot, Dr Young was also unapologetic.

“Canberra is defined as a hotspot because it is in the middle of NSW. We know there are cases around them,” she said.

According to official NSW Health statistics, no new cases have been linked to the Batemans Bay cluster since mid-August. There are no active COVID cases in the ACT, and the territory has not recorded a new case since mid-July.