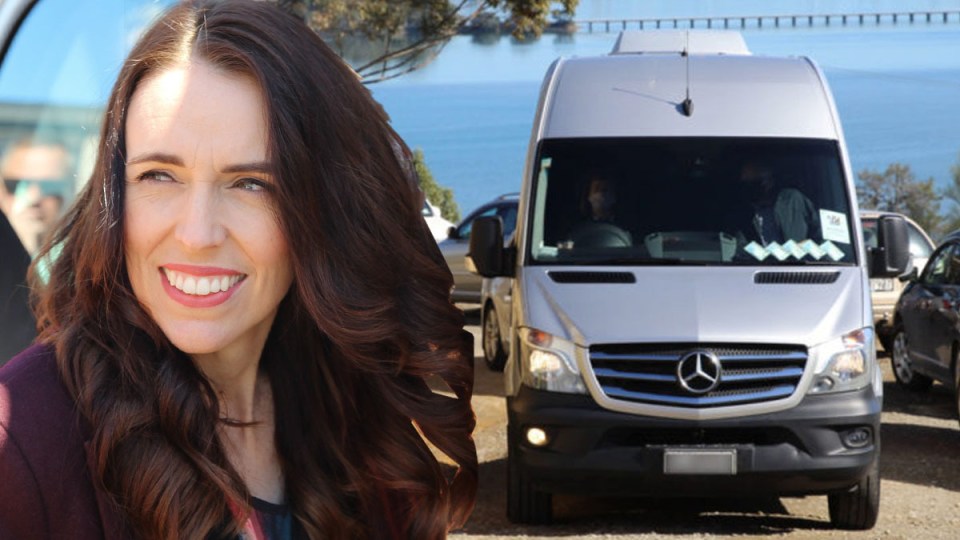 New Zealand Prime Minister Jacinda Ardern's van pulls up at a Maori housing development on the outskirts of Tauranga during her election campaign on Tuesday. Photo: AAP

New Zealand Prime Minister Jacinda Ardern’s vehicle of choice as she racks up the kilometres on the election campaign trail is a humble van.

This week, Labour leader Ms Ardern is staying in the spare room of her parents’ house in her hometown of Morrinsville rather than the PM’s official residence in Wellington or her Auckland home.

She’s making day trips to the nearby cities – visiting Rotorua on Monday, Tauranga on Tuesday and Whakatane on Wednesday – eschewing fancier options available to her and packing her staff into a silver van.

Necessity and practicality are behind Ms Ardern’s choice.

She prefers to travel in the same car as her staff and any accompanying MPs, rather than separately.

This year, that’s not possible.

New Zealand is under level two COVID-19 conditions, meaning there are fewer flights available to choose from and fewer seats on those flights as the national carrier enforces social distancing in the skies.

That might change later in the campaign, should Auckland’s virus cluster lessen to the point where Ms Ardern considers dropping the restrictions.

“It’s a tremendous choice,” Cameron Pearson, of Mercedes dealership Ingham-Sears in Mount Maunganui, near where the PM campaigned on Tuesday.

“The Sprinter is the safest, most economical van on the road.

Ms Ardern’s chariot of choice is even dwarfed by that of her deputy, Winston Peters.

Mr Peters is campaigning across South Island on board the Back Your Future express, a full-sized bus emblazoned with his face and the slogan of his New Zealand First party.

On board the van, it’s all business. Insiders say there’s rarely music through the speakers.

The PM withstands carsickness on her country’s windy roads to read briefing papers and make calls.

It’s also where she updates her Instagram account with stories and posts from her day for her 1.4 million followers.

New Zealand’s general election will be held on October 17.

It’s not Air Force One or ‘Shark One’: No van-ity in NZ PM Ardern’s humble campaign minivan