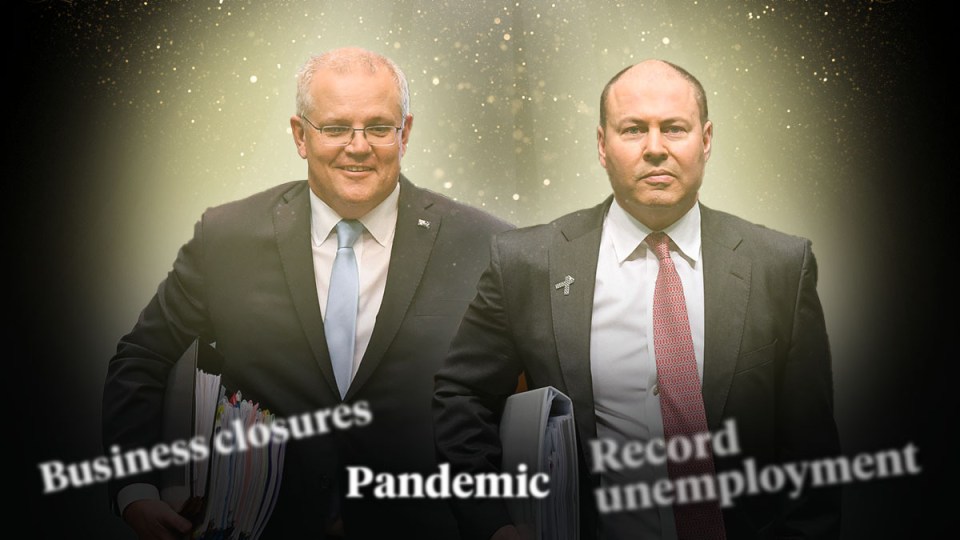 The messaging of Prime Minister and Treasurer has changed, and now it's all about ‘hope’. Photo: TND Photo: TND

An economy in historic recession. An aged care minister censured. A national cabinet at an obstinate impasse over borders. A distracting branch-stacking scandal. A COVID death toll of aged-care residents to hit 500.

It has not exactly been a banner week for the federal government.

But among it all, Scott Morrison and his lieutenant, Treasurer Josh Frydenberg, are starting to gingerly place a few of their eggs into an unexpected basket – hope.

It was an interesting word to hear bandied around the corridors of power in Canberra in the past few weeks.

It’s a word some haven’t dared contemplate for a while, with rising death tolls and crushing lockdowns and lengthening unemployment queues.

But this week, it was everywhere you turned.

“We are dealers of hope,” Mr Morrison told party members this week in the weekly party room meeting, reminding them to stay positive even in the face of grim reality.

“Victorians need to hear more about the message of hope and the way out,” Mr Frydenberg said in announcing the national accounts numbers.

“There is hope for the future,” he said in several later interviews.

“There is a road out. There is hope.”

Indeed, even after the strange situation of the “deal” for AstraZeneca’s COVID vaccine, which turned out to be a mere letter of intent, whispers went around Canberra that the slight over-egging was designed to give Australians some semblance of hope for the future.

“That concentrated effort fills me with greater hope. And what we’ve been able to reach today to put Australia in the leading pack when it comes to vaccines being made available to our citizens also gives me hope,” the PM said at the time.

“Today is a day of hope, and Australia needs hope. The world needs hope when it comes to this coronavirus.”

Some, of course, could see it as a distraction.

Mr Morrison’s Coalition has been left to shoulder the blame for catastrophic blunders in aged care despite its best efforts to daub Victoria’s state government with some level of culpability.

The sitting fortnight kicked off with a more minor, but still distracting, scandal over Assistant Treasurer Michael Sukkar and former minister Kevin Andrews regarding a 60 Minutes report into alleged branch stacking.

The government knew Wednesday’s long-anticipated economic figures were not going to be pretty, and indeed were dampening down expectations with dire warnings in the days leading up.

Things have not been overly rosy in Mr Morrison’s world for some time.

There’s a case for saying Mr Morrison is trying to position himself, as he has for some time, as some unlikely combination of national cheerleader-in-chief and CEO.

He shares inspirational stories and pleads for positivity.

While state and territory leaders are out in the trenches each day giving regular virus updates, or sniping over borders, the PM is trying to put himself above the fray on both.

For some time he has not been holding multiple press conferences a week. He has been preferring to pop up when he has something positive to announce, leaving others to take the lead when it’s not great news.

For instance, before Friday, Mr Morrison had not had a press conference or media appearance since August 28. Nor interviews on the economic numbers.

Instead, he’s spending a lot of time on Facebook, sharing positive messages.

There’s a recorded Zoom call with the cute kids of defence veterans’ families; a snappy graphic showing a poem a nine-year-old girl wrote to him about COVID; a slick video of heartwarming, inspirational photos of health workers.

“Australia will recover and we will grow and our JobMaker plan will help ensure that happens,” he wrote alongside a video of himself, looking decisive and authoritative in question time, after the recession figures dropped on Wednesday.

“This virus will not beat us and we will get through it together.”

Of course, the sprinkling of the word ‘hope’ through various press releases and speeches does not automatically mean a great deal.

But remember, this Prime Minister does pride himself on his marketing and communication acumen – there are few words that pass his lips that aren’t carefully considered, planned, workshopped.

Think first of the Job[Thing] family of programs – JobKeeper, JobSeeker, JobMaker, JobTrainer. The consistency, the branding.

Think, then, of how he has been referring to parts of this pandemic that he finds out of his control – “the global COVID recession”, “the Victorian wave” – to lessen the culpability somewhat.

Australia has, on nearly any measure, fared better than nearly any developed country – on economic outcomes and health issues.

But the spiking aged-care numbers are a tragedy, and one measure people will not soon forget.

A Labor source told The New Daily last week that it plans to hammer the government on aged-care failures as long as it can, hoping to leave an indelible link in the mind of voters between the Coalition and the nursing home fiascos – and it seems to be working.

In the government’s pivot to positivity, they ‘hope’ – pun intended – the public will start to partly overlook that link, and remember Scott Morrison as not the Prime Minister who led them into the mess, but the one that led them out.

Deaths and downturn to ‘dealers of hope’: Scott Morrison’s play for positivity