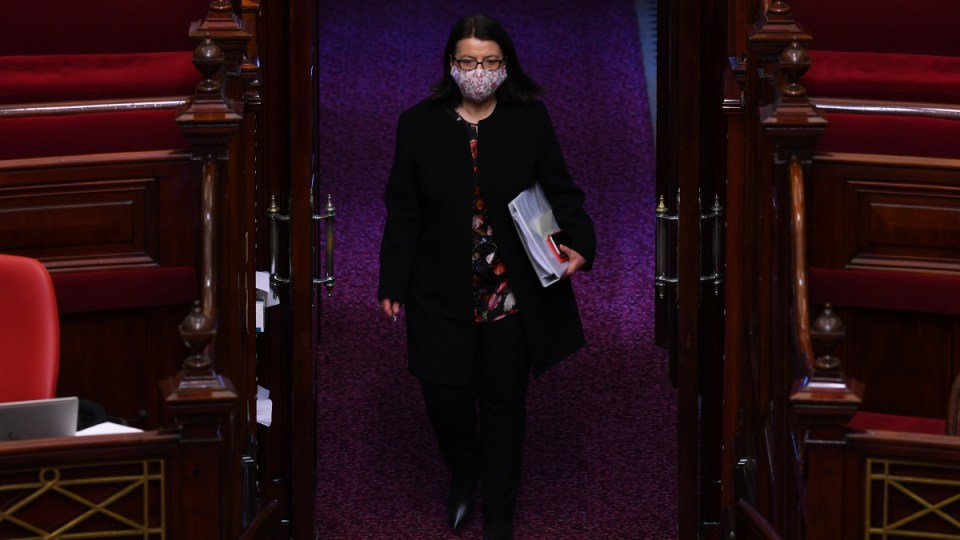 A six-month extension to Victoria’s state of emergency laws has passed parliament by just one vote in a marathon overnight sitting of  parliament.

A surprise intervention by upper house Greens MP Samantha Ratnam, who returned from maternity leave to vote for the amended bill, enabled it to become law early on Wednesday morning.

“I felt it was just too important that I had to be here,” she said, arriving  at parliament with two-month-old Malala.

The bill passed just before 2am on Wednesday, with 20 votes in favour and 19 against.

The laws enable the Chief Health Officer to issue binding health directives during the pandemic but the extension does not meant the current restrictions will remain in place for another six months.

The existing state of emergency was due to expire on September 13 and Premier Daniel Andrews had sought a 12-month extension.

Health Minister Jenny Mikakos told Parliament that without the emergency powers Victoria would “literally fall of a cliff” and “create public health anarchy”.

The state Opposition voted against the bill and accused Daniel Andrews of trying to maintain his grip on power.

“This is driven by the Premier’s lust and love for power,” the Opposition’s David Davis said.

“It’s driven by the Premier’s determination to keep the state closed down.”

The economic impact of coronavirus restrictions is expected to be revealed on Wednesday with confirmation of Australia’s first recession since the early 1990s.

The national accounts for the June quarter is expected to confirm Australia’s worst set of economic growth figures in at least 60 years.

Economists expect the data will show a large economic contraction of around six per cent due to enforced coronavirus restrictions.

It follows the more modest 0.3 per cent decline in gross domestic product in the March quarter when COVID-19 first hit Australia’s shores and confirm a technical recession of two consecutive negative quarters.

Treasurer Josh Frydenberg told parliament on Tuesday the contraction won’t be as bad as seen in other countries “indicating the remarkable resilience of the Australian economy”.

Even so, the downturn has already seen the number of people unemployed increase to more than one million for the first time.

Treasury has also warned a further 400,000 Australians could join the dole queue before Christmas, partly as a result of Victoria’s harsh lockdown.

The June quarter result is expected to include a collapse in household consumption, weak building construction and a slump in business investment and inventories.

The Gabba is set to be announced as the host venue of the 2020 AFL grand final on Wednesday, and Richmond coach Damien Hardwick couldn’t be happier.

With Victoria’s COVID-19 breakout forcing the state into lockdown, the AFL faced a dilemma of where to play the grand final, which would normally attract around 100,000 fans.

The state governments of Western Australia and South Australia put cases forward to host it, but Queensland were always in the box seat given the assistance they’ve provided to the AFL to help keep the season afloat.

It’s understood the Gabba will be the venue selected for the grand final, with a capped crowd of about 30,000 slated to attend the October 24 spectacle.

The match is also set to be played at night in another move that breaks with tradition.

The AFL Commission met on Tuesday morning to make a final decision on the grand final venue, and they are set to announce it publicly on Wednesday.

Premiership contenders West Coast (Optus Stadium) and Port Adelaide (Adelaide Oval) are expected to be allowed to host any home finals at their traditional bases in the lead-up to the grand final.

“I’m very much about the growth of the game,” Hardwick said.

“I think Team Queensland for mine. We love it up here. They’ve embraced us. We’re very fortunate to be up here playing great footy in this great state.

“They’ve certainly got my vote. And I think it’s incredible for the growth of the game.

“To sit there and look at the state and the footy frenzy we’re in at the moment, from my point of view taking Richmond out of it, I’d be more than happy for the grand final to be played here.”