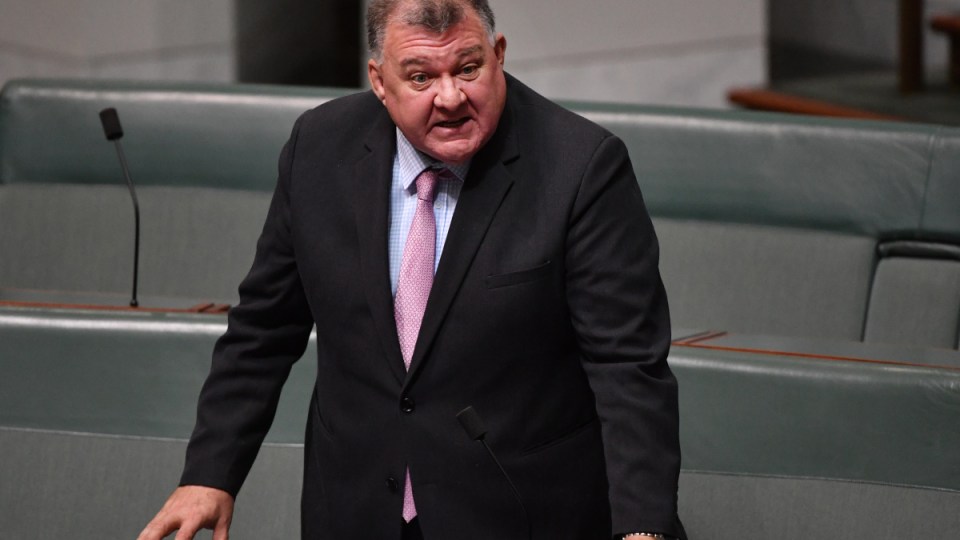 Labor has launched a stinging attack on Health Minister Greg Hunt for his response to claims by Liberal backbencher Craig Kelly that a top doctor has “misled” Australians about the coronavirus.

Mr Kelly, the member for Hughes, claimed at the weekend that deputy chief medical officer Dr Nick Coatsworth had “misled” Australians and should resign.

It came after Dr Coatsworth criticised Mr Kelly’s constant social media posts in support of hydroxychloroquine, an anti-malaria drug touted by some – including US President Donald Trump – as a possible coronavirus treatment in the early stages of the pandemic.

Australian officials do not support the drug’s use for COVID, with acting chief medical officer Professor Paul Kelly saying “it doesn’t work”, and multiple large studies questioning its effectiveness.

Despite that, Mr Kelly has posted on his Facebook page – where he has nearly 60,000 followers – several times a day about hydroxychloroquine. Last week, he also made a speech to that effect in parliament.

In response, Dr Coatsworth said “I think Australians are very clear which Kelly should be listened to in COVID-19, and that is Paul Kelly.”

“Paul Kelly, like myself, like all clinicians around Australia, understands that regrettably hydroxychloroquine is not effective for COVID-19,” he said on Friday.

At the weekend, Mr Kelly claimed in a now-removed Facebook post that Dr Coatsworth “had misled the Australian public” about hydroxychloroquine “and should resign”.

On Monday, Mr Hunt resisted criticising Mr Kelly when asked whether he was “disappointed” with his Liberal colleague’s claims.

“There are many sides of this parliament who express individual views. We see that in relation to all parties at all times, that’s one of the democratic freedoms, but our medical decisions are based on medical advice. We followed those throughout,” Mr Hunt said, at a press conference announcing $563 million for to fight COVID in aged care.

“We will continue to follow the medical advice and we have the utmost faith in our medical advisors.”

Alongside Mr Hunt, Professor Kelly again confirmed Australia was not looking to use hydroxychloroquine as a COVID treatment.

“It has now undergone multiple trials around the world. Every one has agreed it does not show, it has not lived up to the promise … the medical advice is it is not useful as a medicine,” he said.

The acting CMO said he would “always defend my colleagues, including Dr Coatsworth”.

Mr Kelly told The New Daily he would meet Dr Coatsworth this week, and had deleted the post calling on him to resign “as a sign of good faith”.

“The debate is ultimately not about whether or not there is proof it works – it is about the unprecedented interference in the doctor/patient relationship,” Mr Kelly said.

The MP claimed there was “a substantial body of research” that hydroxychloroquine was a useful COVID treatment.

Complete cop-out by @GregHuntMP when asked about Craig Kelly’s attack on the DCMO.
No, there aren’t a “range of views expressed by people on all sides”.
There is 1 Liberal MP undermining the medical advice. Why is the DCMO getting more support from the Opp’n than the Minister?

“Craig Kelly has launched an unprecedented attack on the independence and expertise of the [Therapeutic Goods Administration] and the chief medical officers,” he told TND.

“It’s a disgrace for the TGA and chief medical officers to be getting more support from the opposition than their own minister.”

Words have consequences. When Craig Kelly promotes conspiracy theories and undermines the CMO/DCMO it is dangerous. There is enough misinformation out there without Liberal MP’s promoting more. There is an obligation on Scott Morrison to speak out in support of the DCMO. 2/2

Mr Morrison has been asked about Mr Kelly’s hydroxychloroquine comments previously, including one instance early in August where the backbencher claimed Victorian Premier Daniel Andrews could be jailed for not allowing the drug to be used in Victoria.

“I’m not going to get onto what people talk about on Facebook,” Mr Morrison said.

“The trials are clear on that and, in fact the World Health Organisation pulled hydroxychloroquine from one of its trial arms because the evidence was so clear that it was not effective,” he said.

“That doesn’t happen very often – and it only happens when it is clear there is no benefit at all from the treatment.”

“Regrettably, hydroxychloroquine is not the answer.”