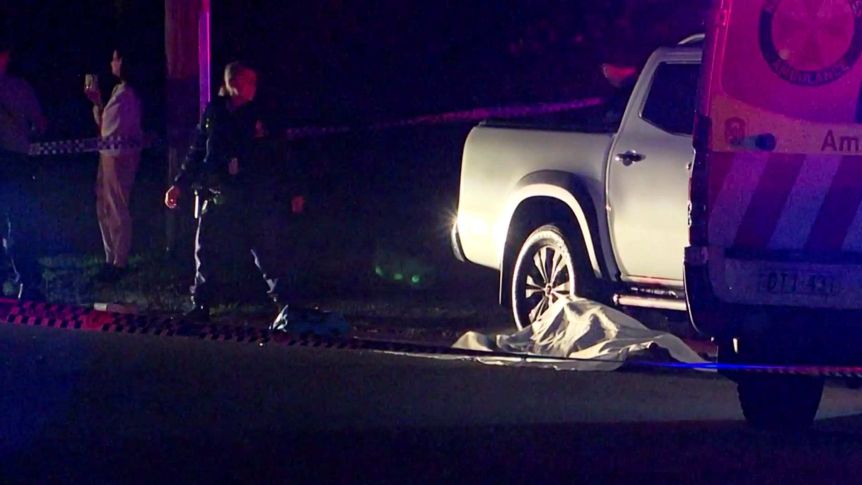 Fares Abounader was killed in a targeted shooting outside his Panania home. Photo: ABC News

Police say they are on high alert for revenge attacks after a bikie was shot dead in a “cowardly and brazen” ambush outside his home in Sydney’s south-west.

Fares Abounader, a former ally of slain former Comanchero boss bikie Mick Hawi, was killed in a targeted drive-by shooting at his home in Wall Avenue, Panania, about midnight on Saturday.

Police said Mr Abounader’s family, including his wife and young child, were home when he was shot multiple times after returning from a night out.

Family members, a neighbour and paramedics performed CPR, however he died at the scene.

Police are investigating whether Mr Abounader’s recent defection from the Comanchero outlaw motorcycle gang (OMCG) to the Bandidos could be behind the attack.

Detective Superintendent Rob Critchlow said police were being “very open minded” despite it being “very easy to jump to conclusions due to who this fellow is and who he used to spend time with”.

“The use of firearms to prosecute internal politics for any group in a public place is totally unacceptable and it cannot stand,” he said.

“He was ambushed in, I’d say, a fairly cowardly, brazen way by someone in the dark who he couldn’t defend himself against and who has taken his life,” he said.

“Regardless of how he’s made some life choices, no one deserves to be treated like this, murdered in such a callous fashion at the front of their home.”

“Often these crimes result in tit-for-tat behaviours and we stress upon anyone who is considering doing that to refrain because it will only make the situation worse.”

Police are searching for a late-model, white SUV or wagon last seen travelling east from the crime scene in Wall Avenue.

Mr Abounader was charged over his involvement in the 2009 airport brawl between rival bikies in which Hells Angel member Anthony Zervas was bludgeoned to death with a bollard and repeatedly stabbed.

Mick Hawi, who served time for manslaughter over the incident, was shot dead in 2018 outside a Rockdale gym.

Two men are currently facing trial for his alleged murder.