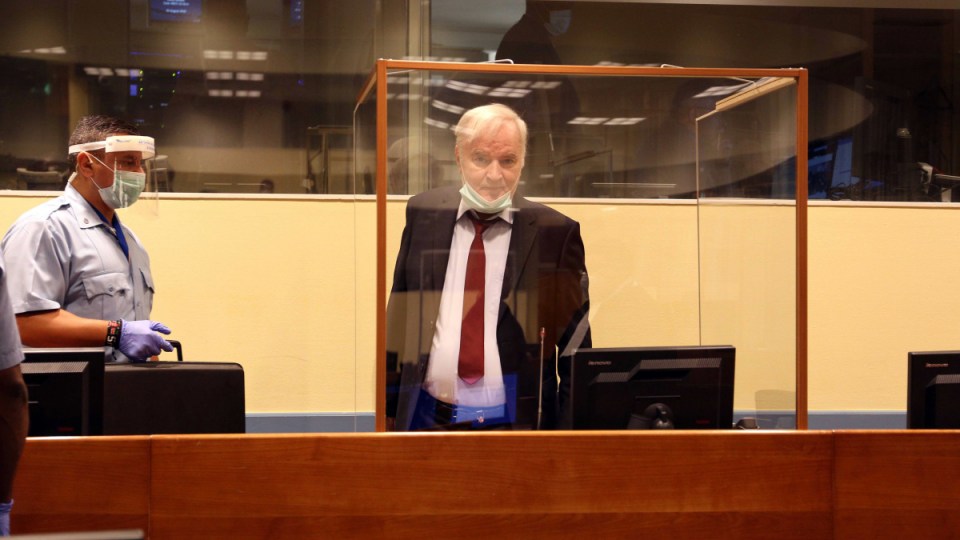 Bosnian Serb former general Ratko Mladic arrives for his appeal at the UN tribunal in The Hague, the Netherlands. Photo: UN-IRMCT/EPA

Prosecutors have called on United Nations judges to uphold former Bosnian Serb military commander Ratko Mladic’s life sentence for war crimes, including genocide, while his lawyers are calling for an acquittal or a retrial.

Mladic, 77, was the commander of Bosnian Serb forces during the 1992 to 1995 Bosnian War and trial judges found he was responsible for overseeing the murder of more than 8000 Muslim men and boys at Srebrenica, Bosnia in 1995.

“Srebrenica was Mladic’s operation, and the trial chamber was right to conclude that he was criminally responsible for these crimes,” prosecutor Laurel Baig said on the second and final day of appeal hearings.

Mladic shook his head in disagreement at times as Ms Baig spoke.

Ratko Mladić appeal hearing before the #IRMCT Hague branch is taking place on 25 and 26 August 2020. For practical information and case background: https://t.co/to2Mnp4vjO

Trial judges found Mladic was responsible for “ethnic cleansing” campaigns against Bosnian Muslims and Croats, and murdering and terrorising civilians in the Bosnian capital Sarajevo during a 43-month siege, as part of a plan to forge a “Greater Serbia” out of parts of the former Yugoslavia.

Mladic will have the opportunity to speak for 10 minutes at the end of Wednesday’s hearing.

“Any illegal killings in Srebrenica that were outside of combat are reprehensible, but they are not tied to Mr. Mladic,” said defence lawyer Branko Lukic during arguments on Tuesday.

The appeal is being held at a UN court in The Hague set up to hear appeals and the remaining cases from the former Yugoslav Tribunal, which closed in 2017.

The proceedings are being broadcast by video because of the COVID-19 pandemic.

Appeals judges have yet to set a date for a decision, likely to be in 2021.