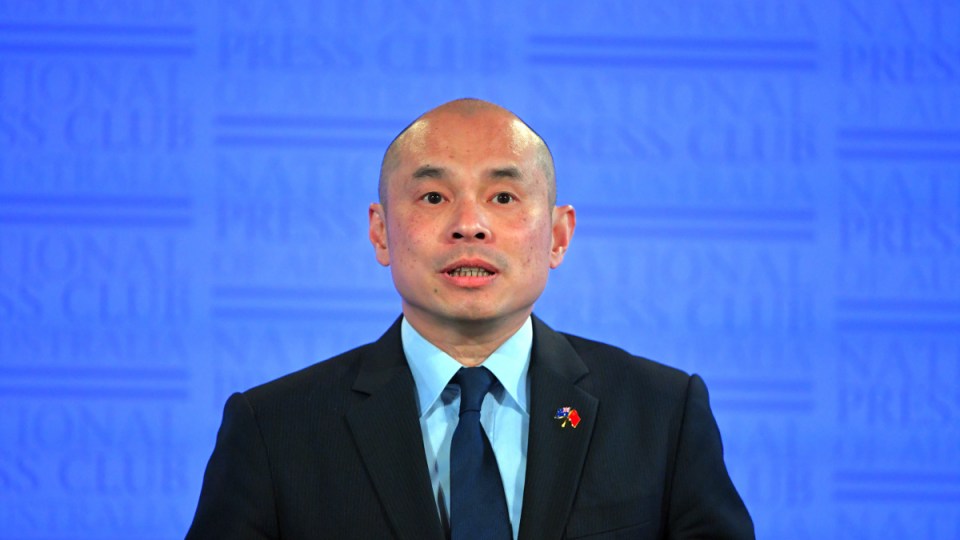 A top Chinese diplomat has given a rare and extraordinary public speech, courting controversy by claiming that the coronavirus might not have come from Wuhan, and criticising Australians for “whining” about “intellectual vulnerability”.

Wang Xining, the deputy head of mission for China’s embassy in Australia, used a speech at the National Press Club in Canberra to say Australia’s call for an international inquiry into the early stages of the COVID pandemic “hurts the feelings of the Chinese people”.

Simmering tensions between Australia and China have threatened to boil over in recent times, with Beijing slapping trade sanctions on Australian exports of wine, barley and beef.

Interestingly, those products were on the menu for the Press Club lunch, served to Mr Wang, journalists and others in the audience.

The Chinese trade measures have been linked to Australia leading international calls for an inquiry into the origin of the coronavirus, with initial reports the virus originated in the Chinese province of Wuhan.

Chinese authorities have been criticised on the global stage for not raising the alarm earlier about the virus. On Wednesday, Mr Wang said Chinese officials were upset at Australia’s rhetoric.

“During that time Australian ministers claimed that the virus originated from Wuhan province. They did not point to any other places as a source. We were singled out, we don’t think it is fair,” he said.

“The Australian government never consulted the Chinese government in whatever way before the proposal came out. We don’t think it conforms
to the spirit of comprehensive, strategic partnership. It lacks courtesy and diplomacy.”

Minister Wang Xining, Deputy Head of Mission/Minister, Embassy of the People’s Republic of China in Australia, Addressing the #NPC on “China and Australia – Where to from here?”
Live now on @abcnews and @SkyNewsAust 📺 pic.twitter.com/GpAIpJS9FG

Mr Wang said it was “a shocking proposal”, saying China was disappointed that Australia – which he said was “supposed to be a good friend of China” – had generated anger.

“It is approximately identical to Julius Caesar in his final days when he saw Brutus approaching him,” he said.

Mr Wang said investigations into the source of the virus should “not put blame on a place or people or authority”, but instead aim “to get people better prepared for a future medical outbreak”.

Asked later about if he was claiming the virus originated somewhere other than Wuhan, he said it was “up to the scientists to find out the origin”.

“This virus was first identified in China, and first reported in China. And we did what we could to provide to [World Health Organisation] and other governments what we have. In order to prevent further damage
to other countries,” Mr Wang said.

“We are a country famous for strict discipline. So we managed to control the virus.”

Asked about so-called “soft power” Chinese government programs such as the Belt and Road Initiative, and ‘Confucius classrooms’ partnerships between Australian and Chinese education institutions, Mr Wang lashed out at critics.

“The BRI is one of the biggest public goods that China provided to the world, and it’s become the biggest platform for international co-operation,” he said.

“I think people are smart enough to decide what influence is good and worth considering, and what is bad and must be fended off … It won’t affect Australians’ own choice of your political and social structure.”

“I don’t see any reason for whining about your constitutional fragility and your intellectual vulnerability.”

Numerous Australian federal ministers claim they have struggled to get in contact with their Chinese counterparts, in attempts to smooth over tensions on trade and foreign affairs. Mr Wang said he wasn’t aware of any issues, claiming Chinese officials were not ignoring Australian politicians.

“There are some shadows over here about our relationship. So we need
to make our position much more clear in order to remove the shadows, and let the sun shine on our relationship,” he said.

“The door to China is always open … It is easy for us to talk about the issues. There is no block in between.”