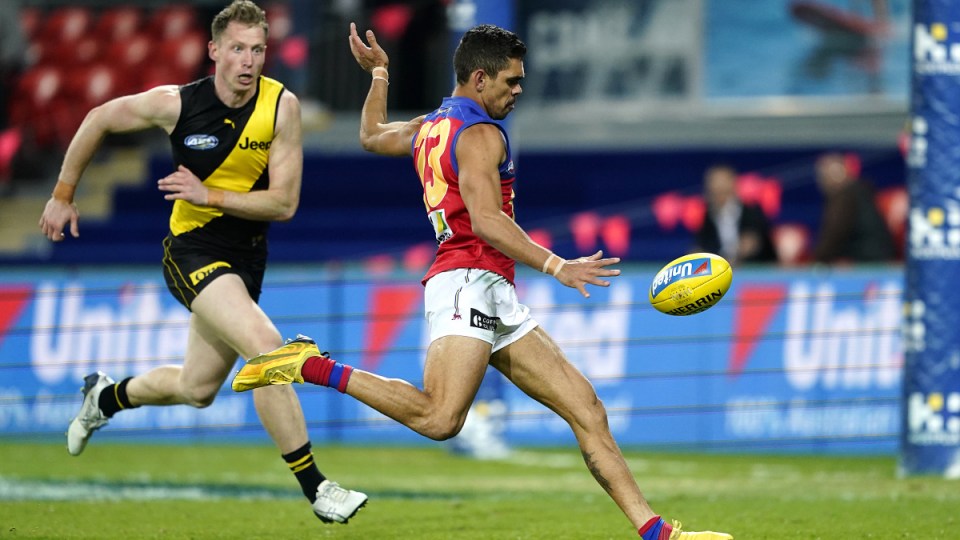 An alleged social media abuser who directed death threats to AFL player Dylan Grimes has been tracked down and charged.

Victoria Police raided a Frankston property on Monday and arrested a 39-year-old man over an investigation into online harassment.

Grimes’ AFL club Richmond confirmed it was the man accused of making “extreme threats” toward Grimes and his family after suggestions he ‘staged’ for a free kick in Saturday’s 12-point win over Essendon in Darwin.

The suspect has since been charged with offences including stalking, using a telecommunications device to menace and threatening to commit a sexual offence.

He has been released on bail, but will face Frankston Magistrates Court in May.

Preparing for Richmond’s Thursday night match on the Gold Coast, the 29-year-old defender thanked Victoria Police for protecting his family’s welfare while away from home.

The severity and pointed nature of the threats went way beyond “normal post-game banter”, he said, and led to him making a complaint to police.

“We were concerned for the safety of my family back home in Victoria,” Grimes told the club’s website.

“Honestly, I am disappointed that this has escalated to this extent.

“It’s not right for anyone, including players and their families, to have their safety threatened.”

Grimes was targeted online after being awarded a controversial free kick for a push in the back in the second term, wiping away a certain Essendon goal that would have put the Bombers 11 points up.

“Reminding the Essendon fans that inboxed me that this is a game we play for fun.”

He was subsequently fined $750 by the match review officer for ‘staging’, his second such sanction after an incident during the Tigers’ qualifying final win over Brisbane last year.

The threats to Grimes came after Greater Western Sydney veteran Callan Ward received death threats and abuse when similarly accused of staging for a free kick in a match against Essendon two weeks earlier.

“Dylan has taken an important stand on an issue that is simply unacceptable,” he said.