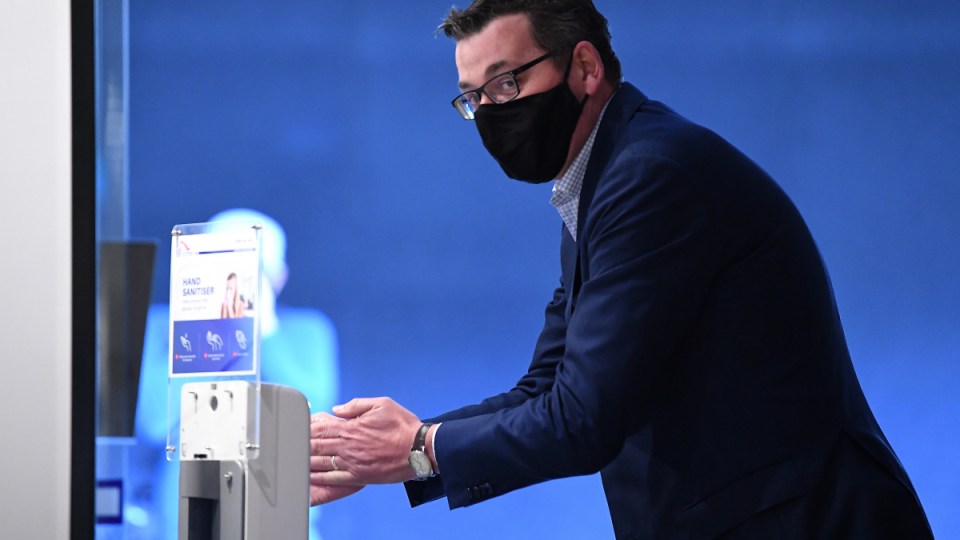 Daniel Andrews has fought back against misinformation. Photo: AAP

Misinformation and fake news has enveloped a state government push to extend Victoria’s state of emergency, with Premier Daniel Andrews hitting out at claims the changes would mean the state remained in lockdown for a year.

A protest against the Melbourne lockdown has been organised for September, with more than 36,000 people RSVPing to an event to “declare the END of the state of emergency” and to “overthrow the Andrews government”.

Federal and state politicians are being snowed under with emails from a concerted anti-lockdown misinformation campaign coordinated across social media, while comedian Magda Szubanski has been the subject of vile trolling for her part in a government ad.

The legislative change is intended only to allow the state government to continue making COVID rules, including capacity limits or restrictions on workplaces.

The backlash prompted the Premier to outline what he wanted to do, and why, on social media:

On Tuesday, Mr Andrews said other Australian states “don’t have any limits” on their state of emergency legislation. Changes proposed in Victoria would “simply continue the existing set of tools that we can draw on”, he said.

He said his government would extend emergency powers only in four-week blocks. But the legislative change would allow that to be done over the next 12 months.

“These restrictions will be in place for not one day longer than they need to be. And the extension just brings us into line,” Mr Andrews said on Tuesday, as he confirmed Victoria had 148 new COVID cases.

“There would need to be fresh advice and a fresh case mounted.”

The Premier’s announcement on Monday was misinterpreted – whether wilfully or mistakenly – by some as meaning a 12-month extension to lockdowns and stay-home orders.

Melbourne’s Stage 4 lockdowns, and the Stage 3 restrictions in regional Victoria, are scheduled to end in mid-September. Mr Andrews has been at pains to say extending emergency powers would not mean that was automatically pushed back.

However, conservative anti-lockdown and anti-vaccination groups on social media have been spreading erroneous claims that the lockdown will be extended.

The claims are being spread by multiple groups on Facebook. Many have followings numbering in the tens or hundreds of thousands.

“The infection numbers have been low for a while now compared to what once was and Dan has still put us in ANOTHER 12 months of lockdown! No independent business will survive!” declared one post on one of the bigger groups.

“Dan Andrews is trying to change legislation so he can keep Victoria under lockdown restrictions for another year,” claimed another, shared in an anti-lockdown group with 16,000 members.

A Facebook event named “500,000 to End the Vic Lockdown & celebrate freedom”, launched some time ago, has swelled to more than 36,000 RSVPs since Mr Andrews’ announcement.

The protest, planned for September 5, has no details or schedule. Previous similar events, supported by anti-vax and anti-5G conspiracy groups, have ended in arrests for breaching social distancing and lockdown rules.

In some of the groups, members share form letters and encourage others to send the template to state and federal politicians. Contact details for MPs are also shared.

In other groups, people encourage others to petition the state governor.

Federal Labor MP Bill Shorten said he’d had a “deluge of emails from concerned constituents”. On the Nine Network’s Today show on Tuesday, the Melbourne MP backed the Victorian government’s plan, but urged Mr Andrews to better explain it.

“I think all [Mr Andrews] wants to do with it is to be able to still have some powers, to get people to wear masks and make sure workplaces have safety plans,” Mr Shorten said.

“But I think it would be handy if he cleared it up today, because I think that figure of the 12 months had everyone freaking out last night. And I think the explanation is a lot more benign. But probably time for Dan the Man to put his explaining skills on display today and just calm the farm.”

On Tuesday, Mr Andrews again tried to reassure Victorians that the new rules were not to be feared.