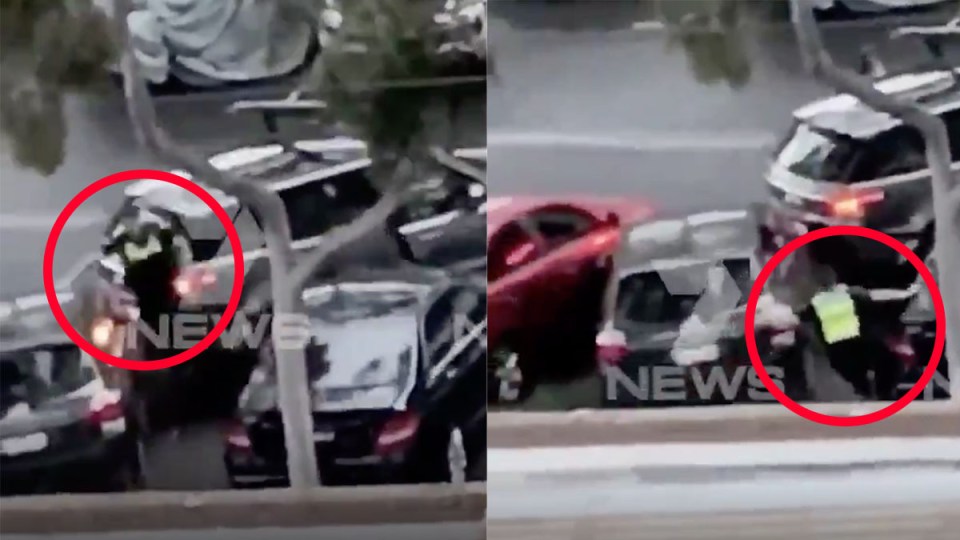 In footage of the incident, the force of the impact threw the officer into the nearby cars, but he escaped with only minor injuries. Photo: Twitter

An alleged Melbourne car thief accused of flinging a police officer into the air as he clung to a stolen vehicle is understood to have tested positive for COVID-19.

Jahdon Tamati, 30, has been charged after vision emerged of the getaway in South Yarra on Friday afternoon.

The St Kilda man was allegedly breaching Melbourne’s stage four lockdown rules when spoken to by police, before he fled to the stolen car in a nearby carpark.

Police tried to stop him from driving away, with one of the officers grabbing onto the side of the vehicle as it reversed into two parked cars.

In footage of the incident, the force of the impact threw the officer into the nearby cars, but he escaped with only minor injuries.

Police say Tamati then fled in the stolen car, dumping it in a street before being arrested a short time later.

He was taken to hospital where he was discovered to be infected with COVID-19 and placed under police guard, Nine News reported.

Victoria Police confirmed in a statement that his trip to hospital was for a “non-related medical condition”.

The St Kilda man’s case was heard briefly in the Melbourne Magistrates Court on Monday.

He’s facing 20 charges including recklessly causing injury, exposing emergency workers to risk, assault, theft of a 2015 Range Rover and unlicensed driving, and is due back in court on November 2.

Meanwhile, a man who was desperate to buy doughnuts is among 216 people penalised by police in the past 24 hours for breaking Victoria’s strict COVID-19 restrictions.

Melburnians are subject to an 8pm to 5am curfew as the state manages a second wave of deadly coronavirus but the man – pinged by officers at Wyndham Vale on the city’s outskirts – apparently had a hunger that couldn’t wait.

He was one of 89 people found breaching curfew in the past day. Twenty-seven others were fined for failing to wear a face mask.

Among the other breaches was a man stopped on the way to his holiday house at Rye, on the Mornington Peninsula, outside the 5km-from-home limit.

Also on the peninsula, two men were fined for climbing the fence to use a closed golf course.

A man and woman were stopped in a car at Ferntree Gully, more than 20km from home, and said they were on their way to collect a pair of shoes they had purchased online.

Premier Daniel Andrews has repeatedly criticised the stupid actions of people who disobey the restrictions, which are due to remain in place until September 13.