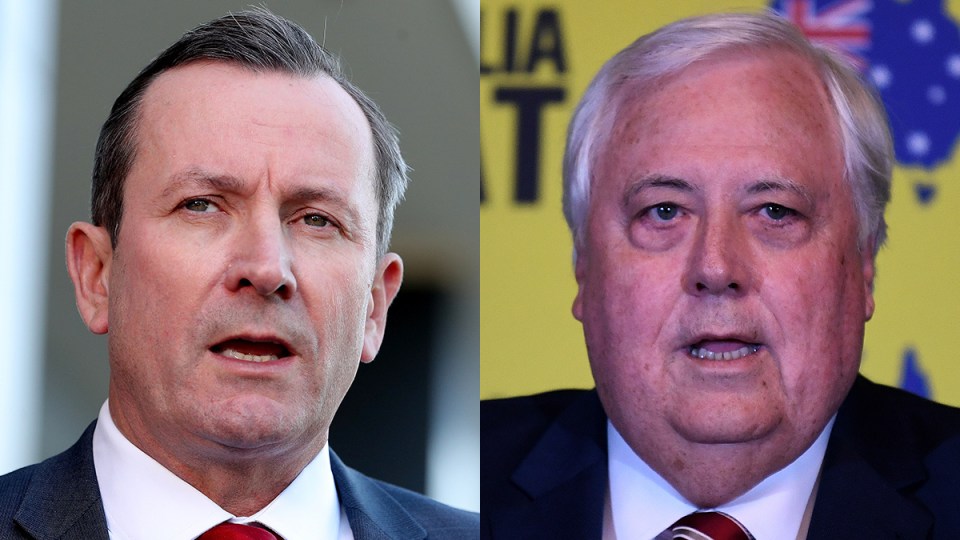 Premier Mark McGowan posted on Twitter that the emergency legislation will now “go straight to Governor Kim Beazley, who has been waiting on standby, ready to sign it into law”.

“This law protects the taxpayers of Western Australia, so essential services won’t be under threat,” Mr McGowan tweeted.

“Thank you to all the Members of Parliament that genuinely supported us on this extremely important matter.”

“This law shows that Western Australians will not be bullied.

It will now go straight to Governor Kim Beazley, who has been waiting on standby, ready to sign it into law.

There’s no time to wait. pic.twitter.com/fMC4A0EOEr

It is intended to have the effect of terminating arbitration between the two parties and stopping Mr Palmer seeking damages against the state.

The bill passed the upper house after the WA Nationals and Greens sided with the government to suspend all other business.

But in a twist, Mr Palmer said the Queensland Supreme Court had on Thursday registered his two arbitration awards.

He said this meant WA’s “draconian and disgraceful” legislation would now be invalid under the constitution.

Attorney-General John Quigley had previously said any court action between the bill’s introduction and assent would be covered by the legislation.

WA’s lower house signed off on the bill on Wednesday night, just hours after it was introduced to state Parliament.

See my latest statement about Mark McGowan and the Cover Up.

Betrayal of the Rule of Law, exemptions from the Criminal Law and removing freedom of information is not what Australia is about!#wapol #auspol pic.twitter.com/Yn2i78HU71

The Liberal opposition and some crossbenchers had unsuccessfully sought more time to scrutinise the legislation, arguing it was unreasonable to consider it within 48 hours.

Government upper house leader Sue Ellery said MPs could not afford to provide Mr Palmer with any opportunity to challenge the bill’s validity.

“If the bill is not enacted and his self-serving claims are not extinguished, then the damages exposure is quite breathtaking,” she said.

Liberal MP Nick Goiran labelled the fast-tracking of the legislation a “pathetic charade for democracy”.

Mr Palmer and his associated companies Mineralogy and International Minerals are pursuing damages over a 2012 decision by the former Liberal government to not assess his proposed Balmoral South iron ore mine in the Pilbara.

The government has calculated the total claim to be $27.7 billion minus costs, an amount Mr McGowan said would effectively bankrupt the state.

He said the situation could have been avoided had the former government heeded legal advice in 2014 to appeal one of the award decisions.

The government has also tabled evidence Mr Palmer offered to withdraw his legal challenge against WA’s border closures if officials agreed to move arbitration hearings relating to the damages claim from Perth to Canberra.

The offer was made in a letter from the in-house counsel for Mineralogy to state lawyers in WA.

Mr Palmer has called on both the premier and attorney-general to resign and said their legislation will cause other companies to reconsider investing in WA.

‘We will never give in’: WA Premier hails passing of emergency legislation to thwart Clive Palmer