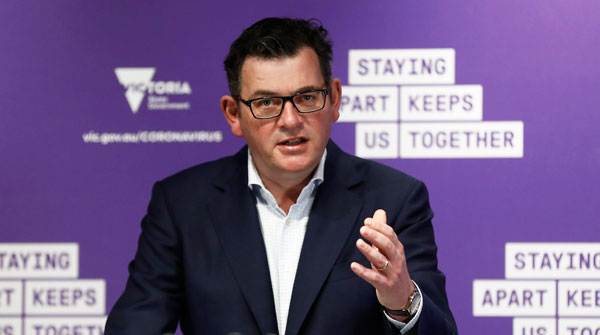 Premier Daniel Andrews was the first witness to appear at the parliamentary inquiry into the hotel quarantine blunder. Photo: ABC News

Daniel Andrews fronted a parliamentary inquiry into his government’s handling of the coronavirus pandemic on Tuesday, as the state recorded another 19 COVID-19 deaths and 331 new virus infections.

It’s the second day in a row the number of fatalities in Victoria has hit 19 – the record highest daily toll yet in the pandemic.

The latest deaths take Victoria’s death toll from the coronavirus to 246 and the national figure to 331.

There were 650 Victorians in hospital on Tuesday. Of those, 47 are in intensive care, with 24 on a ventilator.

Victoria’s deadly second coronavirus wave is thought to have started after failures in the hotel quarantine program – including using security guards to manage returned travellers, instead of ADF personnel.

The outbreak has spread across Melbourne and into regional Victoria, sparking deadly consequences – particularly in aged care. It has also led to tough lockdown measures – including an 8pm-5am curfew – in metropolitan Melbourne.

On Tuesday, Mr Andrews said ADF personnel weren’t on offer to guard the hotels, despite reports to the contrary.

“It is fundamentally incorrect to assert that there was hundreds of ADF staff on offer and somehow someone said no. That’s not, in my judgment, accurate,” he said.

“It’s been provided in limited circumstances in NSW, not to provide security as such but to provide transportation from the airport to hotels.”

Prior to hotel quarantine becoming mandatory for Australians returning from overseas, Mr Andrews said security guards were being used in a program offering healthcare workers accommodation if they had been exposed to the virus and wanted to keep their family safe.

“In many respects, the hotel quarantine system simply became an extension of previously agreed processes,” he said.

He also noted private security guards had been used in hotel quarantine programs in other states.

Asked by Nationals MP Danny O’Brien if he regretted the decision to use private security, Mr Andrews replied: “No one wanted a second wave, none of us has the luxury of going back in time.”

Victoria’s chief health officer Brett Sutton told the inquiry he was not involved in the decision to use private security guards.

‘I was not involved in that decision making whatsoever,” he said.

Under the state’s emergency management structure, the Emergency Management Commissioner Andrew Crisp signed off on the plans.

In a leaked video that emerged on Tuesday, bureaucrats from Victoria’s Department of Jobs, Precincts and the Regions were seen congratulating themselves on pulling together the quarantine program and their efforts to make guests comfortable.

There was no discussion of health restrictions in the video, published by Melbourne’s Herald Sun on Tuesday.

Instead, one bureaucrat describes the program as ‘‘one massive inbound super trade mission, which just keeps rolling’’.

The Premier deflected other questions about the program to a separate judicial inquiry into hotel quarantine that will hold its first public hearings on August 17.

Defence Force not on offer to guard hotels: Premier