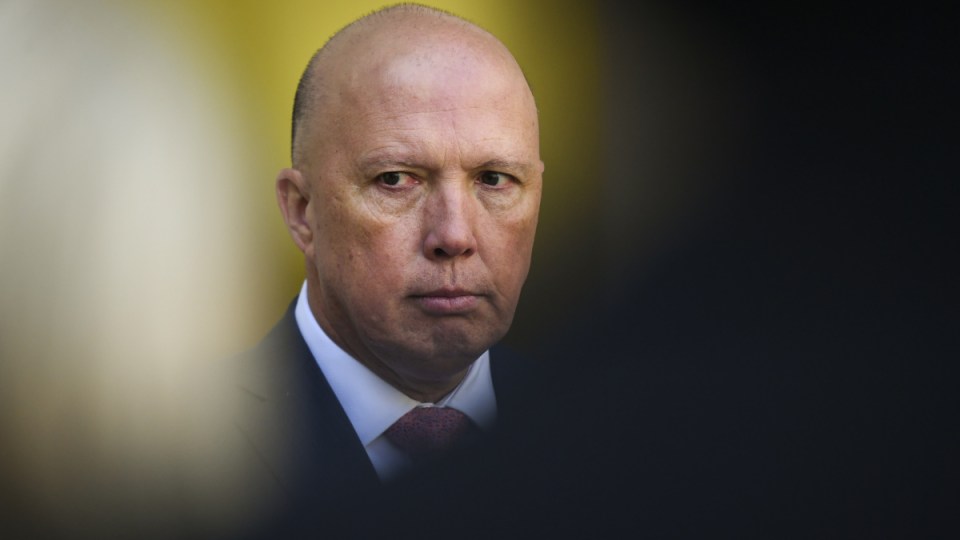 “I’m not going to have them besmirched on a regular basis by anybody,” Mr Dutton said at a press conference on Thursday.

The Ruby Princess docked in Sydney on March 19, with some 2700 passengers allowed to disembark without proper health checks despite 13 testing positive to COVID.

The state government soon realised the error and asked people to go into isolation, but the ship has now been linked to about 700 infections and more than 20 deaths.

Fingers have been pointed over whether state or federal authorities dropped the ball, with both blaming the other at various points.

ABC political editor Andrew Probyn, who broke the story last week, asked Mr Dutton and Prime Minister Scott Morrison on Thursday about the NSW Special Commission of Inquiry into the incident, and the claim that a Border Force official had misinterpreted the test results.

An @AusBorderForce official mistook common flu tests for COVID-19 tests for cruise ship passengers aboard the #RubyPrincess, allowing 3,000 people to disembark despite hundreds of them having #COVID19Aus. #abc730 @andrewprobyn #auspol pic.twitter.com/ESyi9nDZoL

“The suggestion by you that there’s been wrongdoing by the Australian Border Force is completely wrong,” Mr Dutton replied flatly, saying the ABF “does not have a role in relation to clearing people on health grounds”.

“We do not employ doctors and nurses at airports or at seaports. My people within the Australian Border Force who, again, have gone above
and beyond in this response, have really worked day and night to keep Australians safe.

“I’m not going to have them besmirched on a regular basis by anybody.”

Probyn protested he had not criticised the ABF, but the minister continued.

“In your question you put that there was wrongdoing and there was not. Those officers have done their job in relation to this incident and others but they do not provide clearances,” Mr Dutton said.

The minister also said the federal government “have co-operated” with the NSW inquiry, including providing a submission.

Probyn attempted to ask a follow-up question, before Mr Morrison loudly cut him off to move to another journalist.

“Thank you, Andrew, I’m going to go over here,” the PM said, motioning to another reporter.

Mr Probyn, a long-time Canberra political editor, has publicly tangled with Mr Morrison on a number of occasions in recent times, becoming a meme in his own right on TikTok as users imitated his back-and-forth altercations during press conferences.

The $1.7 billion plan is meant to give the Australian Federal Police and Australian Criminal Intelligence Commission new powers to stamp out serious internet crime.

“We will track criminals in the darkest corners of the internet to protect our families and children,” Mr Morrison said.

It will also give $66 million towards a study of vulnerabilities in Australia’s major critical infrastructure and $67 million to improve collaboration between cyber security centres.

Currently the AFP and ACIC can only collect communications in relation to an investigation of a particular person or device, connected with a specific offence, under warrant – but the dark web and encrypted communications apps make identifying suspects extremely difficult.

The new laws to be put to federal Parliament would give the AFP and ACIC easier access to computers used by criminals.

Mr Morrison also revealed Treasury department analysis had estimated Victoria’s new lockdowns will cost up to 400,000 jobs, lead to a 10 per cent unemployment rate by December, and cost billions.

The revised Treasury forecast is for a reduction in real gross domestic product in the September quarter of up to $12 billion.

“This is a heavy blow,” Mr Morrison said.

Having delivered a budget update on July 23, Treasury had to revise its figures in the wake of a surge of COVID cases in Victoria that led to unprecedented lockdowns.

The budget update’s unemployment peak forecast of 9.25 per cent has been revised up to 10 per cent.

The effective unemployment rate, which measures not only people without a job but people with zero hours who are on government support, was expected to be in the “high 13s”, Mr Morrison said.

The Prime Minister said he and Treasurer Josh Frydenberg were considering “further issues” around the JobKeeper wage subsidy, which has already been extended beyond its September cut-off but set to taper off in size.