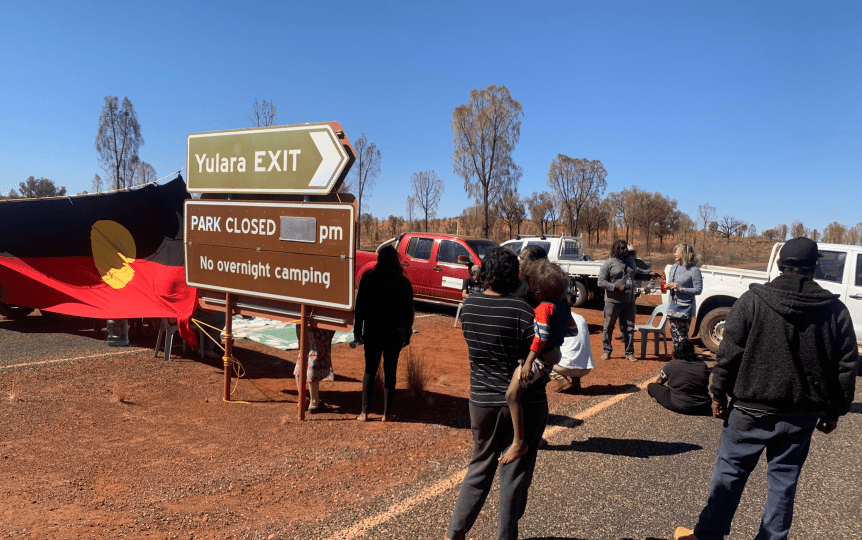 NT Police are at the blockade and have been contacted for comment. Photo: Glenn Irvine

The Mutitjulu Community Aboriginal Corporation (MCAC) is so worried about the potential spread of coronavirus through inter-state visitors that members of the group blockaded an entrance to the Uluru-Kata Tjuta National Park on Monday.

It comes after the MCAC threatened to use “all its influence” to shut the park if people disembarked a plane from Brisbane and were transported into the tourist township of Yulara.

The flight has landed and people have already left to Yulara, with three directed to quarantine in Alice Springs.

“So we started this blockade”, he told the ABC.

“No tourists are getting through.”

The blockade ended after Parks Australia’s announcement it would temporarily close the park.

Parks Australia said it did not have someone available for an interview, but in a statement a spokesperson said it was “committed” to being part of a collective response that “minimises the risk of COVID-19 to staff, visitors and residents”.

“We are continuing to work with the Mutitjulu Community Aboriginal Corporation, Northern Territory Government and Voyages to reach agreement on additional health and visitor screening measures within the Yulara township, at Ayers Rock Airport and departure points, which complement the measures we have already put in place within Uluru-Kata Tjuta National Park,” the spokesperson said.

“As these discussions continue and at the request of the Mutitjulu Community Aboriginal Corporation, Uluru-Kata Tjuta National Park will be closed from 1.30 today until at least 12.00pm tomorrow as all parties continue to work towards a resolution on this matter,” they said.

The NT opened its borders to interstate travellers on July 17, allowing most people to move freely through the Territory upon their arrival.

Anyone who has been to a declared COVID-19 hotspot — which includes Victoria, Sydney and Brisbane — must enter two weeks of mandatory supervised quarantine at a government-approved facility upon their arrival.

Brisbane was officially declared a COVID-19 hotspot on Friday evening, after a string of confirmed cases in the area.

Mutitjulu is an Aboriginal community about 30 kilometres from Yulara Airport, the closest airport for visitors wanting to see Uluru.

Residents of Mutitjulu have repeatedly called for the airport to remain closed amid fears the virus could spread to the remote community.

As it stands, travellers transiting through hotspot areas do not have to quarantine upon arriving in the NT.

In a statement, Shaun Gill at the NT’s COVID-19 Operations Centre said 42 passengers had come in to Yulara on the flight from Brisbane.

“[The passengers] were met by four police members, Yulara Resort management and three health representatives. All were processed within 30 minutes,” he said.

“On arrival at Yulara, three passengers were directed to enter mandatory quarantine in Alice Springs and are being transferred by bus,” he added.

MCAC thought plane was ‘not coming’

Mr Irvine said a meeting among stakeholders, including Voyagers, the corporation in charge of operating Yulara Airport, was held on Friday to discuss the issue.

He said he was left with the understanding flight JQ668 from Brisbane to Yulara would not be arriving in the Territory.

We had some discussion with both NT Tourism and Voyagers, which indicated that flight would not be coming,” Mr Irvine said.

He said he only found out the flight was coming into the NT from a staff member whose friend was employed at the airport.

“At 7.20pm last night, I received a text from one of my staff members. Being a small community at Yulara, his next-door neighbour worked at the airport and they advised our manager that actually the flight was coming,” Mr Irvine said.

But a spokesman from Chief Minister Michael Gunner’s office said a decision had not been finalised on Saturday, and confirmed staff would be at the airport to greet all new arrivals.

He said all new arrivals from COVID-19 hotspots would be bussed to Alice Springs for quarantine.

Last month, Mr Gunner made clear he supported the Yulara Airport remaining closed, and said it would be a logistical nightmare to try and transport people over 440 kilometres to Alice Springs for isolation.

“For us, we’d rather not have to try and manage or operate a quarantine entry point there, that would be great, so I’ve got complete support for the position of the Elders of Mutitjulu,” he said.

‘We’ll be using that influence today’

Mutitjulu residents have said they have remained clear and consistent on their position for weeks.

A press release from the Corporation calls for all passengers on board the flight to be transported to Alice Springs to quarantine or be returned to Brisbane immediately.

Mr Irvine said he had spoken to Senior Executives from Parks Australia, who said they would close the National Park if passengers disembark the flight and head into Yulara.

“We have no control over the airport and we acknowledge that. But we do have some influence over the opening or otherwise of the National Park,” he said.

“And we’ll be using that influence today to try and have the National Park shut, if any people disembark from that plane and are transported into Yulara.”