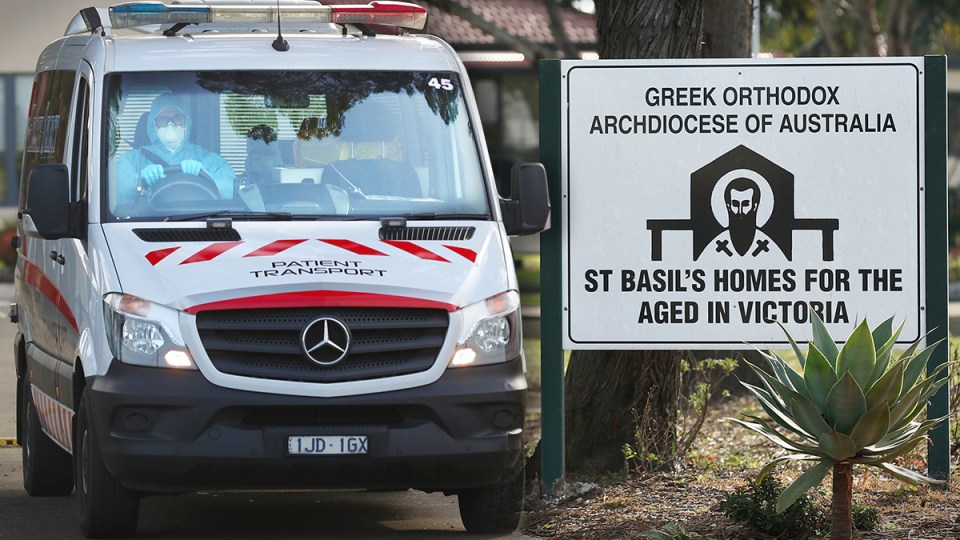 Five days passed before the federal government was notified of a COVID outbreak at the St Basil’s aged-care home in Melbourne, already the scene of some 20 deaths.

Communication breakdowns have been blamed for the failure to report an infected staff member at the home, where there have been 142 confirmed infections.

Revelations around the long delay in notifying authorities come as the federal government refused to name other aged-care centres where there are virus clusters, and calls to release reports into notorious aged-care outbreaks in NSW.

“At almost every step of the growing outbreaks of COVID-19 in nursing homes, the Morrison government has been behind the eight ball and the consequences are sadly tragic,” opposition aged-care spokeswoman Julie Collins said on Tuesday.

St Basil’s Homes for the Aged in Fawkner, in Melbourne’s north, came under fire at a Senate inquiry into the government’s pandemic response on Tuesday.

Federal health officials told the committee they didn’t learn of the first case at the facility, which caused the outbreak, until the state government notified them on July 14 – five days after the staff member reported contracting the disease to management, on July 9.

“The board chair became aware on the ninth [of July] but didn’t raise it with Commonwealth,” Brendan Murphy, health department secretary and former chief medical officer, told the hearing.

Providers are supposed to notify federal authorities, which regulate the private system, and the state public health unit within half an hour of learning of an infection.

“There was a five-day window where the Commonwealth had no line of sight or understanding that there was an outbreak at St Basil’s,” she said.

St Basil’s management has previously disputed allegations of failing to report the case, arguing state authorities were notified on July 9.

Professor Murphy said the delay was likely due to state health officials being overwhelmed.

“I think the challenge was with the huge, overwhelming amount of community transmission. The Victorian public health unit had some delays in both getting tests back and identifying and analysing this was an aged-care outbreak,” he said.

Health Department deputy secretary Michael Lye said St Basil’s was the only provider with an outbreak that failed to tell federal regulators.

“The Victorians might have been under pressure, but the service didn’t notify us,” he said.

In a written statement to the committee, Professor Murphy admitted “very significant challenges and a few high-profile failures” in Victoria.

“There’s no point in me trying to pretend that it all did go as well as it should have done, because it didn’t,” Senator Colbeck said.

There are 1186 active cases in Victorian aged care, with all 11 deaths reported in the state on Tuesday linked to the sector.

As of Tuesday, St Basil’s was tied to 142 infections.

The government has been under pressure to publicly release reports into outbreaks at the Newmarch House and Dorothy Henderson Lodge aged-care facilities in NSW.

Professor Murphy said last week the Dorothy Henderson report had been completed, with the Newmarch report due this week,

But there are no plans to share either widely. They will instead go to the ongoing royal commission into the aged-care sector.

“Why aren’t these reports being made public immediately when Victorian nursing homes are facing such tragic outbreaks? What is the Morrison government hiding?” Ms Collins said.

“It is vitally important that providers across Victoria facing outbreaks have the benefit of these reviews so lessons can be learnt and applied to current outbreaks.”

Senator Colbeck backed some aged-care providers being able to keep smaller outbreaks secret from the public, provided families were notified.

“I’m reluctant to have a public hit list of facilities that have been unfortunate enough to have an outbreak of COVID,” he said.

Professor Murphy resisted the general release of such issues, saying some facilities had only one COVID case, and that some centres were worried about “reputational issues”.

“Some of the facilities don’t want it publicly known that they have outbreaks,” he said.

Greens senator Rachel Siewert said she was “concerned” about this approach.

“I think the public has a right to know which facilities have this infection,” she said.

Professor Murphy said the state officials didn’t see it as useful to deal with the start of the second wave and felt under pressure to manually track surging cases.

“They have now started using the app again and we hope to see some of the successes in NSW,” he said.