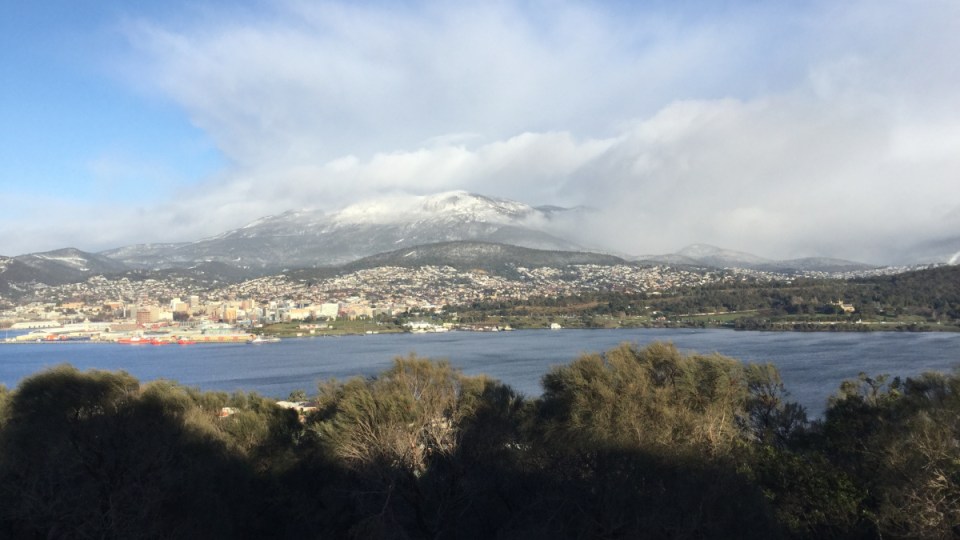 The fmaily are isolaitng in Hobart. Photo: AAP

Eastern states are bracing for a vicious cold snap, with snow forecast for the suburbs of Hobart and as low as 400 metres in Victoria.

The Bureau of Meteorology said a low pressure system was expected to cross Tasmania on Monday night, with snow in Hobart’s elevated suburbs on Tuesday.

Some models suggested the icy blast could even bring snow to sea level in Hobart.

“We’ll initially see some rain starting to develop over Tasmania this afternoon as the cold front approaches and then we’ll start to see the snow line lowering,” BOM meteorologist Simon Louis said

“There could be some snow around, certainly on Mount Wellington and down into some of the Hobart suburbs.

“I wouldn’t be surprised if Mount Nelson, Fern Tree – places like that – saw some snow on the ground.”

Weatherzone meteorologist Ben Domensino said the pool of cold air will spread over Tasmania, Victoria, and southern NSW between Monday and Wednesday.

“As temperatures plummet, snow could reach places that haven’t seen flakes for several years,” he said.

“Some places in [Tasmania’s] west and south could even see snow falling close to sea level when the coldest air moves through.”

Strong, icy winds with gusts up to 90km/h are likely in Tasmania from Tuesday night, while maximum temperatures will drop below 10 degrees for much of the state.

In Victoria, the bureau said the weather was “doing its bit” to help make stage four stay-at-home rules a bit more “palatable”.

Rain is expected across most districts, with snow down to 400 metres in Victoria and far southern NSW.

That means possible flurries in Ballarat and the Dandenong Ranges, east of Melbourne. Towns such as Marysville (430 metres) in the Yarra Valley and Khancoban (337 metres) on the lower parts of the Snowy Mountains could receive up to 10 centimetres of snow.

A bushwalker alert has been issued for hazardous conditions in the west and Central Plateau regions.

“Because this is a fairly unusual situation and we’re talking about some really cold, windy, wet conditions across the east coast, there is some concern if people are not experienced or not prepared properly and are out walking,” BOM supervising meteorologist Simon Louis said.

“It’s potentially going to be some really nasty conditions for them. I would urge anyone that’s thinking of going hiking to those locations to make sure they are prepared and definitely follow advice from National Parks.”

Drivers are being warned to watch for slippery black ice on roads.

“Even once all this snow and rain has gone through, we expect roads to be quite icy for the morning period for the rest of the week,” Mr Louis said.

The cold snap is good news, however, for Australia’s ski resorts. They should get up to 20 centimetres of new snow from the front, with another system expected to bring further falls from Friday.